Basemental: From Northampton to Nashville 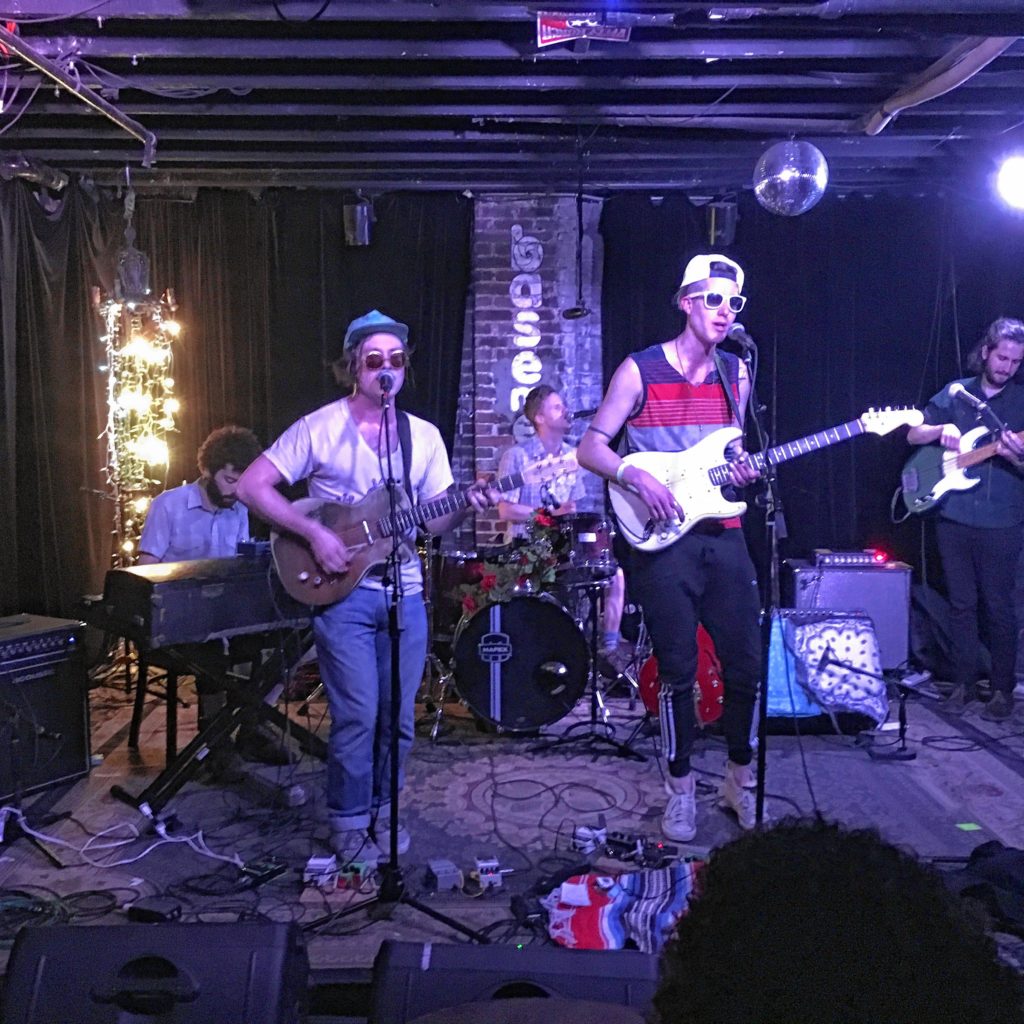 On the road with The Sun Parade

From the streets of Nashville I called Lynne Bertrand, who manages the Northampton band The Sun Parade. There was a problem.

I had stopped by the venue earlier and noticed the sign outside said they were going first. This wasn’t going to fly, because the people the band had driven from Northampton to play for — an A&R rep and the president of New West, a Nashville based record label who is interested in signing them — would miss their set if they went first.

Bertrand, who is a rock behind the scenes for many Northampton artists, arranged for them to play fifth instead.

I rode down to Nashville with The Sun Parade in their van to check out their set and have a front row seat for the high-pressure show at a bar called The Basement, which is perhaps a peculiar fit for Basemental. As many readers know, I wouldn’t normally cover a bar show for a band with a professional label and manager, but this seemed like a fun opportunity to check out a side of the music business I don’t really know, and also hang with a few friends on the road for a few days, so I couldn’t pass up the opportunity.

As the hours passed on the ride down, descending south through different states, gas stations, and seating configurations, I would ask band members if they were nervous. While some might have been subconsciously, there was a humble vibe of letting the cards fall as they may — if it worked out, great, and if it didn’t, that wouldn’t break anyone’s spirit.

The Sun Parade recorded a record last year that was engineered and produced by Rubblebucket’s Ian Hersey, and from the snippets I’ve heard, it captures the band’s unique take on rock and roll with severe pop hooks and is its strongest, channeling everything from the Beastie Boys and The Beatles to modern reggae and jazz. Chris Jennings, who grew up in Northampton, and Jeff Lewis from Maine have built a friendship with dreams attached in The Sun Parade since the band started over five years ago.

After many line-up changes, tours, and a few self-released records, the group have settled into a line-up, now joined by Karl Helander on drums, Max Wareham on bass, and Eli Salus-Kleiner on keys, who collectively bring both a stellar musical and social dynamic. They are essential to having any fun on the road. They’re having lots of fun — you can see it in their rest stop Frisbee game, hear it in their vulgar jokes, and see it on stage too.

Nashville is colloquially known as “the music city.” Someone described the downtown to me as “Disneyland for music.” Although I didn’t make it downtown, everyone I met was somehow affiliated with the music industry in one way or another — one guy made music for commercials, another worked at a venue, another was a mastering engineer, another a promoter, and of course the place is crawling with musicians. The Sun Parade was playing a “New Faces” showcase designed to boost up-and-coming artists. But what struck me was how bland and vanilla all of the music we heard was — the six acts we heard sounded like an identity crisis between country, neo-soul, and stale attempts of channeling top 40 vibes played by young transactional session players to-be.

The Sun Parade was well-received in this context. They sported their Valley flare. Jeff was wearing a dirty Great Smokey shirt, Helander draped fake roses over his drums, and Jennings put a little Mexican blanket at the front of the stage. Chris and Jeff also wore sunglasses for their set. But, most importantly, they sound like a cohesive band who love to play together as they smiled and grinned through their high-stakes set.

It’s the middle of the night now, about 26 hours after the show, and we’re headed north through Virginia. It’s unclear if the record label will pan out, but that doesn’t seem to matter now. As nice as it would be to sign with the same label as the likes of bands such as Ben Folds and Shovels and Rope — and it would be nice to be a step closer to paying rent from music — they seem happy just being together and playing.

Lewis describes financial solvency as a type of puzzle. We’ve been a band for six years,” he says, “but there’s still so much we don’t know if we want to be musicians.” The record will get released one way or another, and there are already a team of people (management from Bertrand and others; a Nashville booking agent) who already have their back and will help them figure out the pieces and put them together. But they’re also in no hurry. Later, Lewis says: “there’s no destination, there’s no place to arrive.”

Arriving isn’t important now, as we still have hundreds of miles before we’re back in Northampton. It isn’t long before Salus-Kleiner chimes in: “let’s puff down and start listening to some tunes, huuh.”