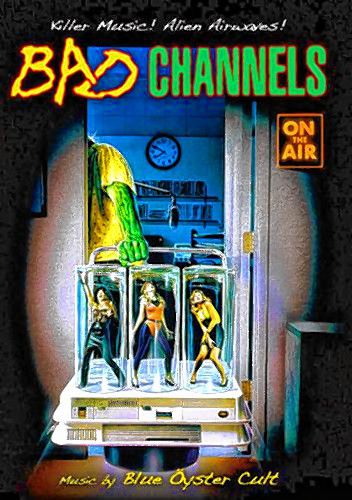 I was saddened when I heard the news that Paul O’Neil, the founder of the Trans-Siberian Orchestra, had died. It seems my favorite bands have either passed away (the Ramones, the Cramps), or are eligible for AARP but continue to stumble on. In addition to Sparks and Alice Cooper, the Blue Oyster Cult is a prime example of the latter. Looking to expand their fan base in 1992, BOC produced the soundtrack for a movie called Bad Channels. Bad idea.

Station 666 radio shock jock “Dangerous” Dan O’Dare (Paul Hipp) has chained himself to his chair, vowing to play continuous polka music until a caller can figure out the combination to a lock that can free him. Myself, I would simply change the channel, but his listeners aren’t so savvy. Entertainment reporter Lisa (played by MTV VJ Martha Quinn, apparently the biggest “star” this production could afford) prepares to interview the dangerous one. When she suspects the stunt has been rigged, she spills the beans to the press. So of course when real aliens invade the radio station, Dan cannot convince his low-digit-IQ fans that it is actually legit.

The first problem here is the aliens. Their entire invasion force consists of two. One has a head that looks like a hunk of broccoli with a visor in the middle, the other is a robot that could pass for Wall-E’s rusted cousin. Named Cosmo and Lump (two monikers sure to strike terror throughout the universe), they have a cunning plan for conquest. It goes like this:

The invaders can somehow see through radio waves — and when they spot a certain type of girl listening to the radio show on the other end (the adjective “trampy” comes to mind), they spring their trap. This involves making the girl believe she is performing in a rock video. Bystanders watch as the hypnotized gal shakes her booty for all it’s worth. When she has gyrated to the extreme, the victim is beamed back to the station, shrunk to the size of a peanut and imprisoned in a small glass jar. That’s it, folks.

You’re probably thinking this is where Blue Oyster Cult comes in. Sadly, the videos are performed by some of the most inept bands on the planet. We have a hair band, a grunge band, and an outfit that incorporates clowns and nuns in a video shot in a hospital (there must be a God, because all these groups immediately disappeared into obscurity). As for BOC, they simply play the background music that wafts in and out during the many less-than-exciting scenes. (Yes, I was one of the few suckers who bought the soundtrack.)

Who was the target audience for this movie? It’s rated R due to “swearing,” but there’s no violence, sex or any other R-rated content, despite the premise. Music lovers are out of luck. As for the finale, the aliens morph into carnivorous tulips! Fortunately, like every well-equipped radio station, 666 has a vast supply of germicide, which Dan and the now re-enlarged floozies use to dispatch the intergalactic threat.

Needless to say, neither the soundtrack or the movie was a hit. Thankfully, the Trans-Siberian crew don’t have a blemish like this on their career. Meanwhile, Blondie is coming out with a new CD. The ancients stumble on.