Back Talk: Why I Marched For Science

Why I Marched for Science

In 1970, we celebrated the first Earth Day. I remember it vividly as a college student at the University of Michigan. The energy of the first Earth Day, focused on the alarming rate of deterioration of our environment, helped lead to landmark changes in policy such as creation of the Environmental Protection Agency, and the Clean Air, Clean Water, and Endangered Species Acts.

Earth Day is now a worldwide event commemorated in almost 200 countries. This is a clear statement that we are all in it together and that a healthy environment is a common good. Today this shared commitment is at risk; we must reaffirm the important underpinnings of those vital roles of government.

As a physician, former Vermont Commissioner of Health, and soon to be Peace Corps volunteer in Sub-Saharan Africa, I have and will continue to rely on science as my guide for medical and policy decisions. In the age of Google, fake news, and deep distrust of government institutions, it’s easy to lose track of the truth that science brings us.

Health and medicine, like the environment, rely on science to drive good policy. Given this, what is my charge to those of us who are scientists?

Become an activist — something we may not be comfortable with or that we’ve been trained to do, but that is vital at this point in our country. Spell out in plain language what the science says, even when it may not be popular. Be transparent with any potential conflicts. 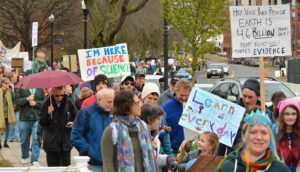 Hundreds of people walk in the March for Science on North Pleasant Street in Amherst on Earth Day, 2017.

We must be empathetic with dissention but firm in our conclusions on issues: climate change is real, vaccinations work, smoking causes cancer and heart disease, addiction is a brain disease and sugar-sweetened beverages cause obesity. Denial is based on an individual’s strongly held beliefs and values — we must understand this as we work to make headway on important public health priorities.

Finally, do it over and over again. Repetition is an evidence-based strategy — and we have to do it together, as the whole is undoubtedly greater than the sum of its parts.

In Vermont, as elsewhere, we have hotter summers, harsher winters, earlier springs and more precipitation. Just to cite one of many alarming changes: The temperature of Lake Champlain has increased 5 to 7 degrees in the past 50 years.

Extreme weather events occur more often. In 2011, I had been health commissioner only a few months when heavy spring rains caused rising rivers, evacuations, and extensive road damage in Northern and Central Vermont. On Aug. 28, Tropical Storm Irene flooded a large part of the state — we lost six lives, homes were destroyed, drinking water contaminated and at least 500 miles of roads and 200 bridges were damaged and impassable. Access to medications, hospital and health care was limited for a time. We bear the physical and emotional scars of Irene to this day. The May storm and Tropical Storm Irene were only two of the 18 federally-declared disasters in Vermont over the past decade.

Climate change does not affect people equally. Everyone is at risk, but people who spend a lot of time outdoors, those with health sensitivities and people with limited financial and social resources are more affected.

How many more Flint, Michigans, or North Bennington, Vermonts, will we see without a clear commitment to clean water for our citizens? In Flint it took a fearless pediatrician and scientists from Virginia Tech to expose the lead in the water that was endangering Flint’s most vulnerable citizens. I met Dr. Mona Hanna-Attisha and she is a true hero. We all need to be like Dr. Hanna-Attisha, using science and raising our voices to confront power to protect our citizens’ health and well-being.

There is hope — and we all can take actions to reduce the risks. Start by supporting science, listening to science, acting by science. Pay attention to the challenges to science and when you see them, clearly articulate the science as we know it, early and often.

When it seems to fall on deaf ears, do it again, louder. Do it as if your life depends on it — indeed it might.