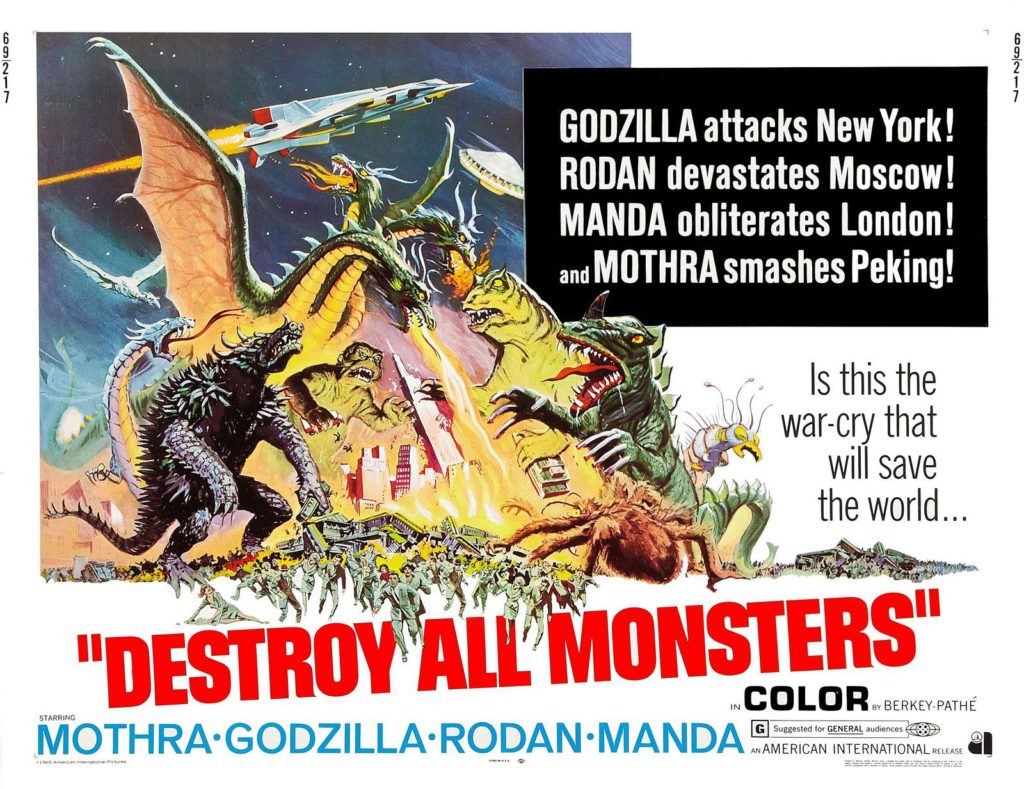 Sometimes the best laid plans go awry. First case in point: The just-released King Arthur was carefully groomed to be a blockbuster but flopped spectacularly at the box office. Second case in point: After I decided to review another movie of this ilk — Gods of Egypt — my not-quite-legit DVD froze up halfway through. I took that to be a sign from the gods, who apparently wanted to spare me the sight of Gerald Butler trying to walk like an Egyptian.

Okay — No way, no how am I going to buy another copy. But now I had to find another equally bad movie to review. Instead of traveling to Egypt past, I decided to head to Japan of the future.

Godzilla is currently riding a new wave of popularity. But in the late ’60s, the Big G had fallen on hard times. He needed a reboot to put him back on top. Welcome to Destroy All Monsters, which was made in 1968 but is set in the far-distant year of 1999, when all the monsters featured in Kaiju (the Japanese monster film genre) are living on an island called — you guessed it — Monsterland!

In this far-flung future, humankind is so advanced that people regularly receive long-distance phone calls from the moon. (Phone bills are still too high, so some things haven’t changed.) A race of female aliens in smocks decides to put a wrench in the works by taking control of Godzilla and his pals and unleashing them on the cities of the world.

Sounds good on paper — but the budgets for Godzilla flicks are probably less than Chris Christie’s weekly legal bill. Hence, the spectacle of Godzilla, with his new puppy-dog-looking face, destroying New York, or of Rodan — now resembling a cross-eyed turkey — pummeling Moscow, do not have the impact you would think. To make matters worse, the dialogue is mind-numbing: “Let’s go!” “Right!” “Watch out!” “Right!” “Shoot ’em!!” “Right!” are what passes for snappy patter here. In fact, if you took a drink every time someone says “Right,” you would soon be as hammered as Larry Tate from Bewitched. In the most boring scene, a group of soldiers spends what seems like half an hour trying to remove an alien device from its pedestal with a welding torch. Plenty of time to use the john here.

Yet all may be forgiven thanks to the rousing finale. King Ghidorah battles Godzilla and his cohorts — Anguirius, Mothra, and others — in a monster free-for-all. Gorgosaurus performs his infamous kangaroo kick, and even Godzilla’s son, Minya, gets into the act by blowing smoke rings around Ghidorah’s neck. The victorious monsters shake their booties in an end-zone dance.

Well, sometimes things work out for the best, as our trip to Japan turned out better than our planned sojourn to Egypt. I wonder, though — has ANYONE ever made it through Gods of Egypt? Gerald Butler in the buff was my tipping point.