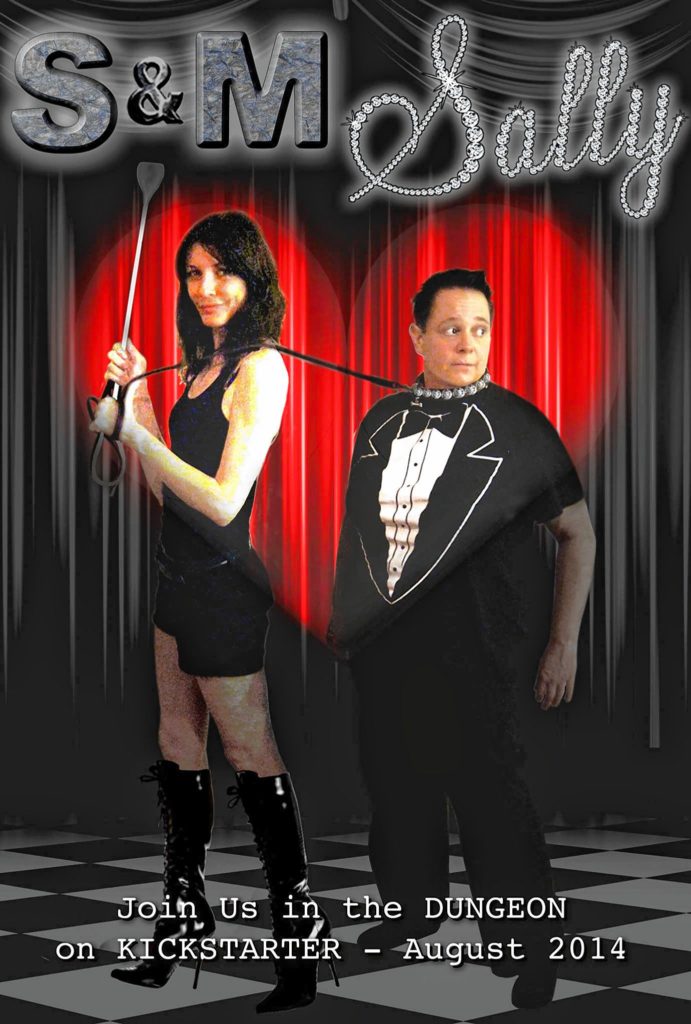 Filmmaker Michelle Ehlen practically invented multitasking. Her IMdB profile stretches on with credits that range from editing and production to cinematography and soundtrack. Though she’s had a hand in other LGBT films, like the popular Eating Out series, Ehlen is best known for her work as actor/director/writer/editor/producer on her lesbian film trilogy, comprised of Butch Jamie, Heterosexual Jill, and S&M Sally.

You might remember my glowing recommendation of Heterosexual Jill from last month’s Pride column. This time, I’ve been lucky enough to watch its successor, S&M Sally. The film, which is a sardonic take on modern relationships, follows lesbian couple Jamie (Ehlen) and Jill (Jen McPherson) as they explore the BDSM scene. Meanwhile, Jamie’s friends David (Scott Keiji Takeda) and Lola (Shaela Cook) battle to see who is the most enlightened in their newfound polyamorous relationship. Where Butch Jamie and Heterosexual Jill dealt with anxieties surrounding gender and sexuality, respectively, S&M Sally is a fresh take on insecurity within relationships. I adore Ehlen’s entire trilogy, but this one, in particular, is worth a watch, if not just for a pointed joke about Northampton lesbians.

A former Noho resident herself, Michelle Ehlen graduated from Smith in 2000 before heading off to The LA Film School. I chatted with Ehlen about streaming sites, butch lesbian representation in film, and why she’s never going back to a straight club.

What led you to write S&M Sally?

In a 2008 interview with AfterEllen, you said you thought butch lesbians would soon become more “in the mix” in film and TV. How do you feel about that prediction, nearly 10 years later?

That’s really funny, I don’t remember saying that [laughs]. Culturally, things have changed. There’s no longer security guards literally running after me into the bathroom … but that happened at a straight club, and, like, note to self, never go to a straight club again [laughs]. I think gender presentation is a lot more in the political conversation these days. But in terms of butch representation, I really can’t think of a whole lot.

It’s cool, though, because you’re creating that representation yourself.

Yeah! I actually started as an actor, but after I graduated from college, because of the way I look, I basically said, I’m not going to act anymore because nobody will cast me. So when I started writing movies and I had the ability to add characters that looked like me, it was kind of like, why not? There’s nobody telling me I can’t do it. Although, actually, people did tell me I couldn’t do that. But then I did.

Your first two features were self-funded, but S&M Sally had a Kickstarter. Can you talk a bit about how your experiences with independent production and funding have changed over the years?

I had a short film that came out on a DVD compilation in 2003, and it was a much more robust era in terms of like, “Oh, this is a lesbian shorts DVD, let’s all buy it and watch it.” As time has gone on, that’s tapered off because content has increased. So, on the one hand, that’s great, because digital production makes it so accessible for people to tell different stories, but on the other hand, the market is oversaturated, so it is harder to actually make money to then make another movie. I’m hoping that Netflix will pick up S&M Sally, but they’re picking up less and less content.

How do you think streaming services (like Netflix, Hulu, etc.) have changed the game for independent film distribution?

The main thing with Netflix versus some other platform is that Netflix will do licensing deals that last one year or probably more, and they’ll pay you a certain amount of money for that time. Other platforms, like Hulu and Amazon Prime, will generally pay per minute or per view. So what it all adds up to, at least with Heterosexual Jill, is that our deal with Netflix for two years will probably be about equal to all the other revenue from all the other sites combined. What’s not so great is that Netflix is putting all of their time and their money into original content now, which takes it away from [independent filmmakers]. That said, they do know what people watch. So the more LGBT films that people watch, theoretically, the more they will acquire.

Speaking of, is there a streaming service that you think has the best LGBT content?

Not yet. I feel like we’re not quite there.

I read your next project is going to be a drama film.

Yeah, I’ve been writing it. This script is very character-driven and very thematically driven and very low on plot. It’s more like a slice-of-life, post-divorce, healing, growing, moving on, blah blah, blah. My character gets divorced in New York and she’s relocating to LA, and she stops off somewhere in the middle to stay with her high school best friend. It’s been interesting, because I get to rediscover how to make a film. My plan is to shoot next fall. The film is tentatively titled Maybe Someday.

You can watch S&M Sally via Seed&Spark, Vimeo On Demand, iTunes, and Amazon.