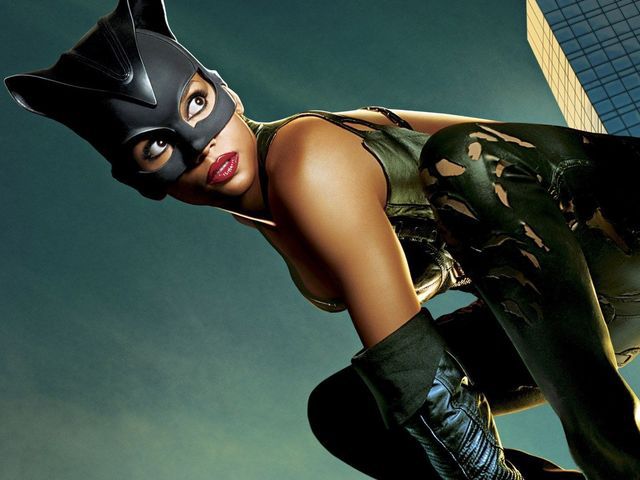 For Father’s Day, I was treated to a screening of the new Wonder Woman movie. My daughter summed it up well: It was better than good, but not great.

What I cannot understand is the fever this movie has generated. Women-only showings? Were there any women-only showings for Tomb Raider? One reviewer is said to have bawled her eyes out when Wonder Woman decked some bad dudes. Did anyone cry during Red Sonja?

Wonder Woman has been touted as the first female-superhero movie with a woman director. Excuse me, but I believe 1995’s Tank Girl holds that honor.

There were many great super women before Wonder Woman, but Supergirl and Elektra are now just hazy memories; the same goes for TV superheroines Emma Peel and Xena (the only woman who can make a centaur squeal). Does no one remember Catwoman?

This led me to rewatch Catwoman (2004), starring Halle Berry. Was it really as bad as I remember? Let’s find out.

Patience (Berry) is a mousey (pun intended) artist working for a cosmetics company. When she learns that her company’s new facial cream causes skin deterioration, her sleazeball boss flushes her away through the septic system. Left for dead, she is resurrected by an ancient (CGI) Egyptian cat.

When the movie focuses on Patience’s new feline abilities, the fur really flies. When she orders a drink, she gets a White Russian minus the vodka and Kahlua (pure cream, get it?). When she battles villains, it’s on catwalks. Empty tuna cans litter her apartment. She loves catnip, but pester her and you get hissed at. She puts her hand over a thug’s mouth and asks, “Cat got your tongue?” Of course, everything is purrrrrfect (yes, they actually do use that line).

It’s when the inevitable love interest arrives that Catwoman turns into a furball. Tom Lone (Benjamin Bratt) is the ultimate cliche: the handsome cop with no woman currently in his life, who makes a point of teaching little kids to be good (though when Patience trounces him during a game of hoops with her cat moves, he is not above twerking with her in front of the tots).

Patience soon loses all inhibition and dons a leather suit along with the moniker Catwoman. Tom is charged with bringing this new vigilante in — but who is she? At one point, Patience writes the word “sorry” on a paper cup when she misses a date with Tom, then writes “sorry” again on a bag of jewels she’s heisted as Catwoman. Not the sharpest pencil in the precinct, he doesn’t get it. Even when Patience gulps down sushi by the bargefull, crack detective Tom remains stumped.

Catwoman decides it’s time for revenge and goes after her ex-boss, but finds he has been offed by his wife Laurel (Sharon Stone). Stone-faced because of the facial cream, Laurel engages in (what else) a catfight with Catwoman. Surprisingly well-filmed action scenes are marred by inappropriate dollar-bin hip-hop music, but Catwoman lands on her feet in the end, quite literally.

Our feline friend comes to terms with her new dual identity, as does Wonder Woman. Yet W.W. is applauded while Catwoman is consigned to the litter box along with Barb Wire, Resident Evil and the rest. It may not be the cat’s meow, but it is far from distempered.