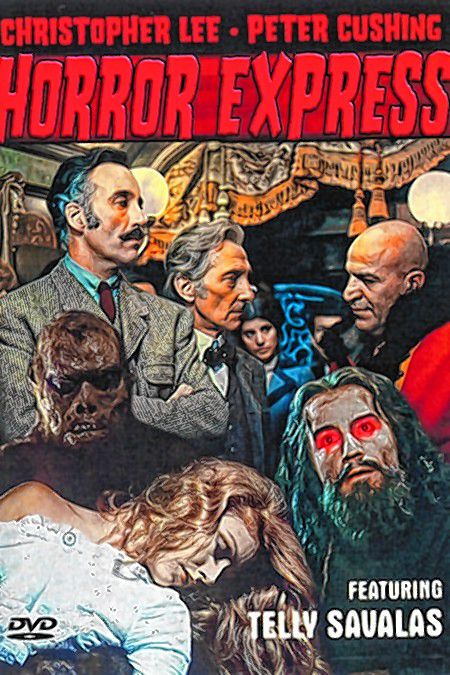 Allll aboard! Welcome to the Trans-Siberian express. I hope your journey is a pleasant one. Try not to be bothered by the marauding yeti in the baggage department.

A bit of background may be in order so you can properly appreciate your trip. Spanish director Eugenio Martin had just finished filming Pancho Villa (1971) with Telly “Kojak” Savalas. Martin had a model train built for the picture and wanted to get as much mileage out of it as he could. So he prudently decided to shoot another film using the train. This would be a horror film, and it would feature a yeti as a stowaway. Sounds like a train wreck already, right?

First, Martin secured the services of Telly again (thanks to a contract clause). Even better, he managed to procure Peter Cushing and Christopher Lee, the two big horror stars of the day. (Lee originally balked, saying the food in the studio canteen was terrible, but agreed to sign on for the ride.)

Horror Express (1972) begins with anthropologist Saxton (Lee) escorting a fossilized abominable snowman onto the train. Rival doctor Wells (Cushing) is curious as to why chalk drawn on the yeti’s crate leaves no mark. Lee explains the phenomenon as a “yoga trick.” (?) Now, you’re probably thinking that the fossil is going to awaken and run amok. Well … you’re right! Not only does it run amok — it steals people’s minds and memories, leaving their brains “soft as a baby’s bottom” (so we are told). It somehow accomplishes this by turning its victims’ eyes white and causing them to bleed profusely. Another yoga trick? Beats me. But it even manages to turn the eyes of a fish opaque (ha , false alarm — the aquatic creature was just boiled for dinner).

Soon the yeti is shot dead. But wait — the picture is only half over! Turns out the yeti was serving as the host body for a stranded alien. And with the alien capable of body-hopping, who now can tell who’s who? (Asked whether he or Lee is now the monster, Cushing replies incredulously, “Monsters? We’re British!”)

An urgent telegraph message is dispatched to Cossack Kazan (Savalas), who, class-act that he is, is interrupted during a tryst with a floozy in a barn. Now the movie goes into hyperdrive, as Telly and his men board the train. Conducting an interrogation, the future Kojak saunters around with a stogie in one hand and a glass of bubbly in the other, indiscriminately punching people while declaiming, “Do you think I’m a fool?!” Suddenly, Saxton snaps off the lights and the alien’s eyes are seen glowing bright red in the dark — which leads to another revelation: The creature is not actually an alien, but none other than … Satan himself!

Literally all hell breaks loose as Beelzebub possesses a bevy of passengers. But the creature has one final surprise: It turns out it is not actually Satan after all but … the King of the Zombies! So the train is now filled engine to caboose with dozens of the undead sporting red, white, and (a few) blue eyeballs.

Luckily there is a junction in the track up ahead where the train can either go straight or follow a set of rails that lead over a cliff (who in his right mind would build something like that?). Bearing its hellish cargo, Eugenio’s model train plummets off the precipice, while Lee and company manage to scramble to safety.

Thus our exciting trip on the Trans-Siberian Express comes to an end. The moral of the story? Next time you think someone’s body has been hijacked, check first to determine whether the invader is an alien, Satan or the Zombie King — and don’t fire until you see the reds of their eyes.