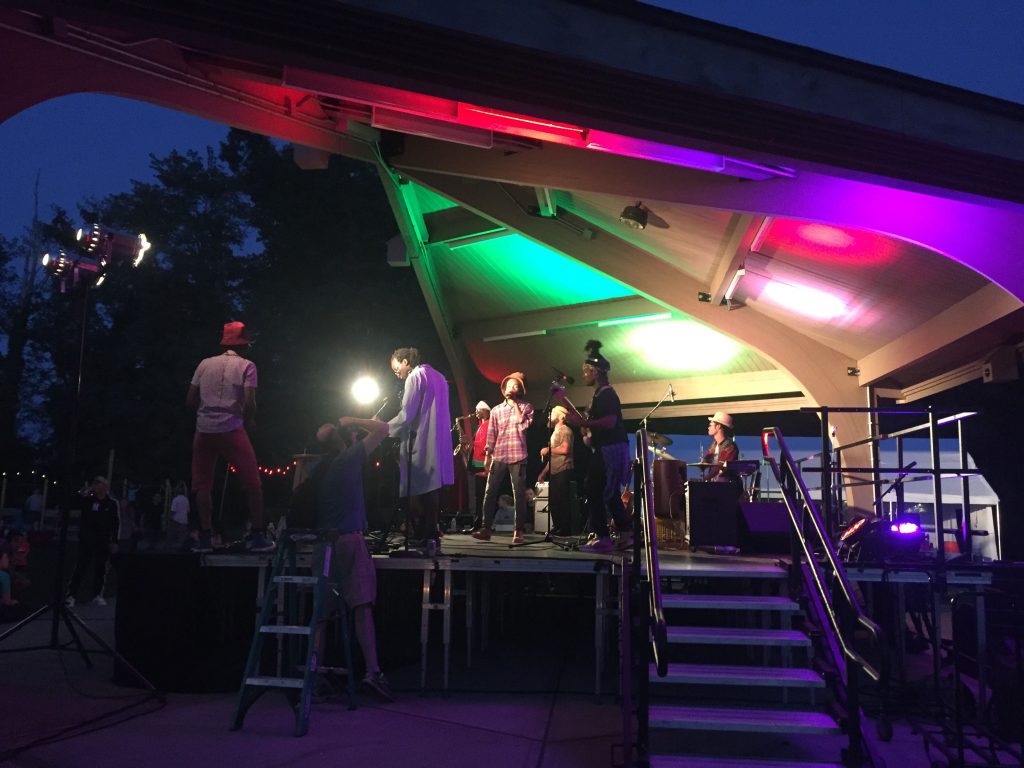 For the last six weekends of summer, Millpond.Live puts on a free grassroots festival at Millside Park in Easthampton for all ages to enjoy. Produced by Laudable Productions, a creative agency in Easthampton that has a plethora of services including community engagement to concert production. The concert is powered by volunteers in the community and sponsored and supported by local businesses, including us at the Valley Advocate. 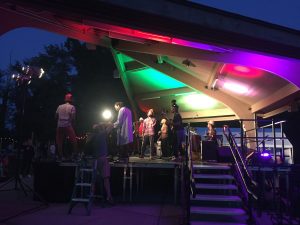 Combining live music, food from local food trucks, craft beverages, pop-up art installations, storytelling, dance, games, and more to unite people together is what it’s all about — engaging in the community.

The stretch of grass was full of families on their blankets and chairs, outlined with food trucks, a playground, and vendors. The blown-up circular air mattresses that were scattered throughout were awesome. The stage was the focal point with multi-colored lights bouncing off the first band performing, The Boogalistics from Northampton.

The sound of jazz in the extremely hot Indian summer evening was somehow making the thick air more bearable. An hour into the concert, the sun was setting which raised hopes it would cool down a bit.

Before the second band finished setting up, I took a walk around the perimeter. I got my ID checked so I could grab an adult beverage, and one of the artists from Off The Map Tattoo in Easthampton saw my tattooed arms and offered me a $25 token off my next tattoo — score!

Western Mass’s percussion guru, Tony Vacca, had a drum workshop set up towards the back inside a storage trailer shining with strings of lights. It was called The Human Calliope. Every time I walked past, it was loaded with people playing instruments and Vacca conducting. In between sets, you could hear the distant sound of the world-infused drums coming from the storage trailer.

Walking back to my spot on the grass I spy a drone floating around above us. The night is falling so the two red lights are reminiscent of red beady eyes staring at us. I’m with my coworker, Dave Eisenstadter, on this subject and fear the takeover of the robotics. This was the first time seeing one at a concert, and it seems unnatural to me.

On a happier note, sitting cross-legged eating a “Just” — a cheddar grilled cheese from Say Cheese food truck — and drinking a Mule from New City Brewery on top of a Spongebob blanket under a clear star-lit sky with my son made me content.

The Brown Rice Family, the Rastafarian reggae ska with a hint of Latin flare from Brooklyn jump-started the vibes. “Only you can see what you wanna do in your future,” the singer chanted at us. “Believe in yourself.” The crowd repeated his positive words with a crowd interaction. They danced on stage in pure ska fashion as we danced on our blanket. Their merch table was loaded with organic cotton T-shirts with positive sayings, hand soaps, and CDs.

Once the night fell the string of red lights along the bike trail reflected off the bodies sitting on the park benches making them look like still life paintings, adding to the attraction of the art-esque. Shadows of kids, including mine, playing on the playground.

Advocate Sessions alumni Tang Sauce and DJ Stealth came on stage to bring their peace, love, and positivity. Tang Sauce did a free flow rap of all the sponsors in a smoothly curated rhyme, while DJ Stealth mixed the beats. They went into an original jam before announcing Hazmat Modine from NYC to wrap the night.

Hazmat Modine brought the night into a blues rock experience that was reminiscent of New Orleans. The singer/harmonica player stood on a black patent leather metal chair center stage from time to time and jumped into the crowd. “Come closer or we’ll have to come out and get you,” he teased. One by one people got closer. Each individual musician took turns being front and center with their instrument, showcasing their talent. The little comedic banter in between songs from the singer sent giggles in the audience.

Walking back to the car, we stopped at the Crooked Pop Sticks stand and grabbed an orange cream flavor for my son. With it dripping down his hands in the car after saying he had a good time, in his most ska-influenced voice possible he goes “Let’s rewind and pick it up! Pick it up! Pick it up!”