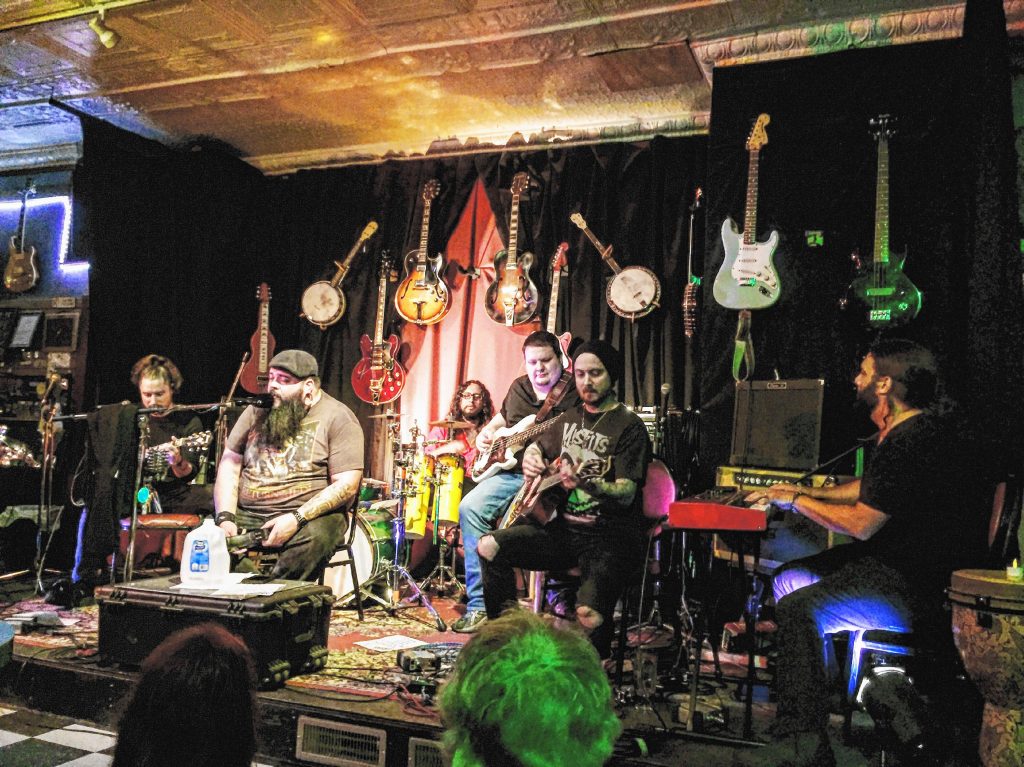 City of Homes heats up the night with an acoustic set at Luthier’s in Easthampton.

After having a so-long get together at Galaxy in Easthampton with my coworkers to send off Kristin Palpini on her next adventure, I dragged my sad ass down the street to Luthier’s Coop. And I tell ya, there’s nothing like seeing Pee Wee Herman’s inviting goofiness to bring a smile to my face. Kudos to whoever put that delight at the entrance.

The small venue is illuminated with white string lights, the walls are lined with all different guitars. It’s comfy and it smells good.

Recent Advocate Sessions alum Mark Schwaber from Westfield sat down center stage with his acoustic guitar and sent us into lullaby-ville. His voice is soothing and beautiful and you could feel his emotions through each guitar stroke. His comical banter in between songs sent out laughter and lightened the mood from his ultra sensitive (in a good way) songs. He was inviting us into his diary. He busted out some loops and I was reminded how I’m always fascinated when singer/songwriters incorporate a looping machine.

Boston grunge band Swivel, which is currently touring with City of Homes, set up for their first acoustic gig. In response to that they say “whatevs.” Well, I’d never seen or heard them before, but they were acoustically arousing and made the grunge girl in my heart want to hear that electric sound sting as well. I heard a dash of Nirvana, as in, if Nina Gordon from Veruca Salt was now taking over vocals for Cobain… that would be Swivel. Heart-hands.

So many Nirvana influences, my heart is content @swivel_band 🖤

It was nice to see the metal scene fam at an acoustic show as well. The unending support system in the music scene is heartwarming and incredible.

Hearing metal songs orchestrated acoustically, it’s almost as if you’re hearing them for the first time. The vibe is different. People sat down comfortably in seats, and some were cross-legged on the floor. The rest of us were standing positioned near the intimate stage. That was how we were all viewing City of Homes on this special night.

Stripped down, you could hear the vocals more clearly, and the emotions ran through.

Joseph Izayea on vocals and the occasional tambourine, Tyler Stroetzel and Jon Kita on guitars, Jeffrey Fortier on bass, Fransisco Yepez manning the drums, with Kevin Bias stepping in on keys brought the metal down a notch and made us all melt. The black and white spangle dog mascot of Luthier’s was laid out next to me while I moved to sit cross-legged on the checkered floor for a closer look. It was nice to pet him, or her, while I enjoyed the music inches in front of me. It was as if we were listening to a storyteller. There were stories and memories behind each song, something that you probably wouldn’t hear at a normal metal show. So to see into the depths of the lyrics as we heard it was a treat. They ended the set with their first single, The Departer.