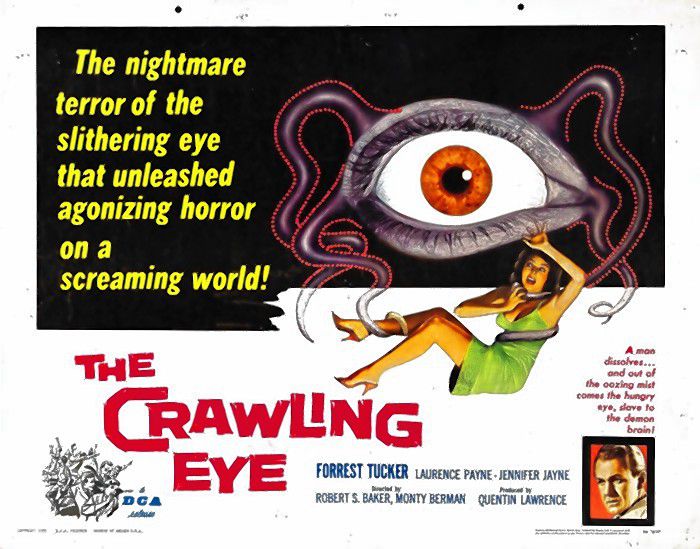 I recently had the opportunity to visit the Peabody Essex Museum in Salem and view an exhibit by Kirk Hammett.

“Kirk who?” you ask. Why, none other than the lead guitarist for the thrash metal band Metallica. Can’t say I was ever a fan, but Hammett’s collection on display was interesting. Growing up with a love for old horror films, he has amassed a treasure trove of original movie posters.

The collection mostly focuses on the classics — the original Frankenstein, Dracula, and others of such ilk. But then there were a few posters from more obscure flicks, which, however, I am happy to report, were familiar to yours truly. One was for the 1958 British feature The Crawling Eye. When a less-informed patron in my vicinity wondered aloud, “Who would be afraid of an eye?” I hastened to expound on the virtues of the film, and those of its star, Forrest Tucker. “The guy from ‘F-Troop’?” was the incredulous reply. Apparently not a big selling point, that. But will The Crawling Eye really entertain your peepers or force them shut? Let’s see.

The original title of the film was “The Trollenberg Terror,” since it was based on a British series of the same name. That may have been fine for intellectual Brits, but the distributors figured that low-brow Yanks would respond better to a more lurid title — hence, “The Crawling Eye.” And to further play to our tastes (or those of teenage females, anyway), they brought aboard that leading hunk, Forrest Tucker.

Plot: Climbers in the Swiss Alps are mysteriously vanishing and, even worse, turning up headless. UN worker Alan (Tucker) is called in to investigate. He first attempts to pump the locals for info by buying rounds of drinks and plying them with cigarettes. They gratefully partake of the booze, but remain tight-lipped. At a mountaintop observatory, head scientist Crevette (Warren Mitchell), speaking in a faux German accent that would make Col. Klink cringe, gives Alan the scoop. “Der ist dis cloud,” he intones, “dat trafels arownd der side off de mountain, goppling up der climbers.” (In the movie, it’s just a piece of cotton nailed to a picture of a mountain, but why nitpick?)

Meanwhile, two sisters blessed with mind-reading powers arrive at the local hotel (the younger of the duo, Anna, is played by the easy-on-the-eyes Janet Munro, who went on to star in numerous Disney films). Anna can sense there is something alive in the cumulus and that it is ticked off. Soon a lost climber returns to the hotel, but something is amiss. His coordination is so off that he can’t even pour himself a drink. Since this is unheard of in Trollengburg, red flags are set off. The possessed Swiss yokel attacks Anna — and to make matters worse, the cloud decides to head down to the local pub!

No time for last call, as the entire village (portrayed by about a dozen extras) hightails it up to the observatory via a cable car. Here the monsters make their long-awaited appearance — they are giant, multi-tentacled creatures sporting a single huge eyeball. (OK, the effects may not be eye-popping, but they are entertaining.)

Who will survive as the monstrous pupils put the terrified citizenry in their sights? Don’t worry — if Forrest Tucker can keep F-Troop in order, a few colossal irises are no sweat.

So to conclude my response to my fellow museum patron, yes, “The Crawling Eye” is a sight to behold and conveys a nice creepy atmosphere throughout. Fine performances also, except for ze atomik zientist. Unlike most of the bad movies that come my way, this is one eye recommend. By the way, you can still see the Hammett exhibit. It’s called It’s Alive, and it runs through November.