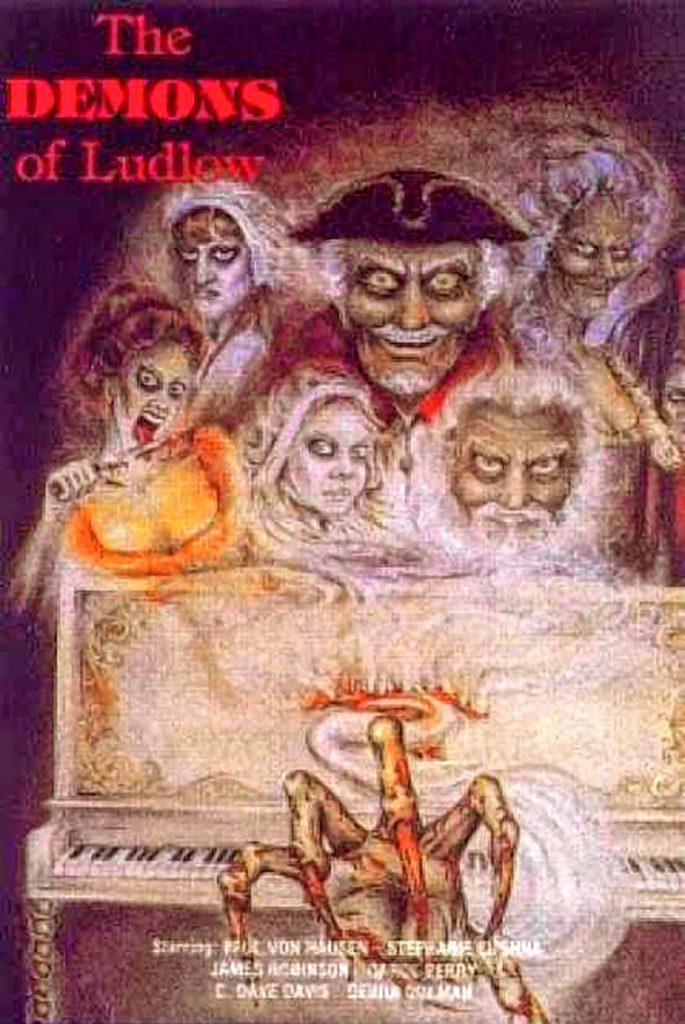 As I type this column, it is not yet Halloween, but by the time it sees print the holiday will be over. I’m still in a scary-movie mode, watching such fare as “Abbott and Costello Meet Frankenstein.” But maybe I should switch gears and see what’s available now on TV. Wow! Hallmark is already running Christmas movies! That’s pretty scary right there. Well, OK — let’s go with one last spookfest. Think of it as munching on those leftover candy corns none of the trick-or-treaters wanted.

Today we are going to visit “The Demons of Ludlow.” Never heard of ’em? I know the Jersey Devil and the Boston Strangler get better PR, but let’s give these demons their due.

Our tale takes place, as you may have guessed, in the New England town of Ludlow. Is it the “real” Ludlow? This town has a population of 47, and its residents only come out at night. Close enough.

Our opening shot features a scantily clad woman getting ready for a party (not a good sign when the producers open with their best shot). We then switch to town hall where the town’s bicentennial celebration is getting underway. Then it’s back to our provocative lady being berated by her husband, who turns out to be the local minister. Then it’s back to town hall, where the mayor reveals the newest addition to the hamlet’s store of treasures: a centuries-old piano. For most of the townsfolk, this is a yawn; but fear inexplicably appears on the faces of some.

Glad to see you are still following, because now the movie careens into a black hole of incomprehensibility. Former resident Debra, who has returned to write a story about the town, thinks something is amiss. She would never cut it as a reporter at The Daily Hampshire Gazette, because she uncovers… absolutely nothing. If you had to take a drink every time she mutters “I don’t know what’s going on,” you would soon approach a lethal blood-alcohol level.

Meanwhile, the local organist plays a dirge on the piano that almost puts everyone into a coma. People stand in front of, then enter the town hall in scene after scene after scene. Can you stand the excitement?

A young (scantily dressed) couple heads for a tryst in a barn and is attacked by a glowing hand with a shotgun. A deranged (scantily dressed) young woman is attacked by demonic Pilgrims. The organist gets beaned on the head with rocks and is mysteriously dragged through the ceiling. A tree stump explodes with fireworks. Why are these things occurring? Damned if Debra and I know.

But wait — it turns out the minister may be onto something. He questions our crack reporter: “Do you know about the curse?” “Nope.” “The secret list of names?” “Nope.” Must be she works for CNN.

Finally the holy man spills the beans. Turns out Mr. Ludlow, the settler of the town, was taken to task by the villagers for his lascivious behavior, with his hands chopped off for good measure. And the centuries-old piano, it was his, see, and his evil spirit somehow still resides in this musical tomb, and now it wants revenge.

At this point, the townspeople face a choice: They can either smash the piano to bits or they can play a particular sequence of notes that will trigger a zombie pirate infestation. Which would you choose? Incredibly, our heroes select the latter. Utter chaos ensues as the piano goes airborne.

Well, time to go back to “A&C Meet Frankenstein” — at least that movie made sense. As for me, I’m avoiding the town of Ludlow altogether, especially around Thanksgiving. Flesh-eating pilgrims are a sordid lot.