Back Talk: Where are police when downtown violence breaks out

Where are police when downtown violence breaks out? 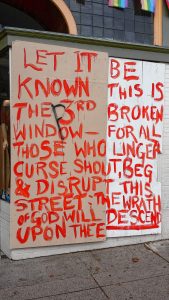 There never seems a police officer shortage at any road construction site. What reason this state uses police officers instead of the construction company hiring flag men is beyond me. It’s such a waste of taxpayers money and resources when real problems are elsewhere.
—Misa Rodriguez, website comment
I never see a police officer just walking around downtown. I don’t know where that person hangs out, but it’s not on Main Street.
—Debbie Way, website comment
Wow! One police officer for all of downtown! Great plan!
—Douglas Jensen, website comment
Sounds like a job for Batman.
—Scott St. Pierre, Facebook comment
Thank goodness that has been cleared up … now about this whole Trump-Russia thing…
—Frank Bertrand, Facebook comment

Global Warming isn’t all fun in the sun

My consensus and take away on climage change/global warming is that a greater number of people across the globe are beginning to accept that the negative, man-made effects on our planet are happening. The problem now facing climatologists is no longer having to prove global warming is real, but instead proving how detrimental to life on Earth it is, including our own.

What I hear from folks, time and time again, is how wonderful it would be if we New Englanders were to have spring-like temperatures year round. We as a society sometimes tend to shun the bigger picture of how the dependency of ecosystems around the world are intertwined. There is no wall great enough to isolate us from the negative impacts of a rapidly changing planet we call home.

The Real Deal with the Keystone Pipeline

I have seen a number of articles about the Keystone XL pipeline being routed through Nebraska but none tell the information that people need to know. Do people know that it will only carry tar sands oil and other oil will still be moved by rail and be subject to derailment? Do people know that the Koch brothers own the 2 million acres in Alberta, Canada, which produces the tar sands oil? Do people know they expect to profit $100 billion per year? Do people know that after refinement in the gulf that the oil is for export? Have people seen pictures of the “pet coke” (a black powder that sticks to eyes and lungs) that is removed from this very dirty oil? It is piled up in football-field size piles along the Calumet River in Chicago causing a health emergency whenever the wind blows. They can’t have little league games. Do people know that spills are very serious because this dirty oil contains heavy metals such as lead, mercury and sulfur which cause the oil to sink when it enters a river? The Kalamazoo River is dead for 35 miles. Do people know that the taxpayers of Michigan have spent over $1 billion trying to clean it up because the oil company has no responsibility for spills? It is not cleaned up yet from this spill of 2010. Do people realize that only about 35 permanent jobs will result?

Mike Pence is supported by the Koch brothers. Everything this administration does is to enrich their wealthy donors (such as the GOP tax plan). People need to realize this. Piles of pet coke are what we will get from this pipeline. Oh yes, we will also get the heavy smog and resulting health issues from the heavy metals.