Blaise’s Bad Movie Guide: The Robot vs. the Aztec Mummy 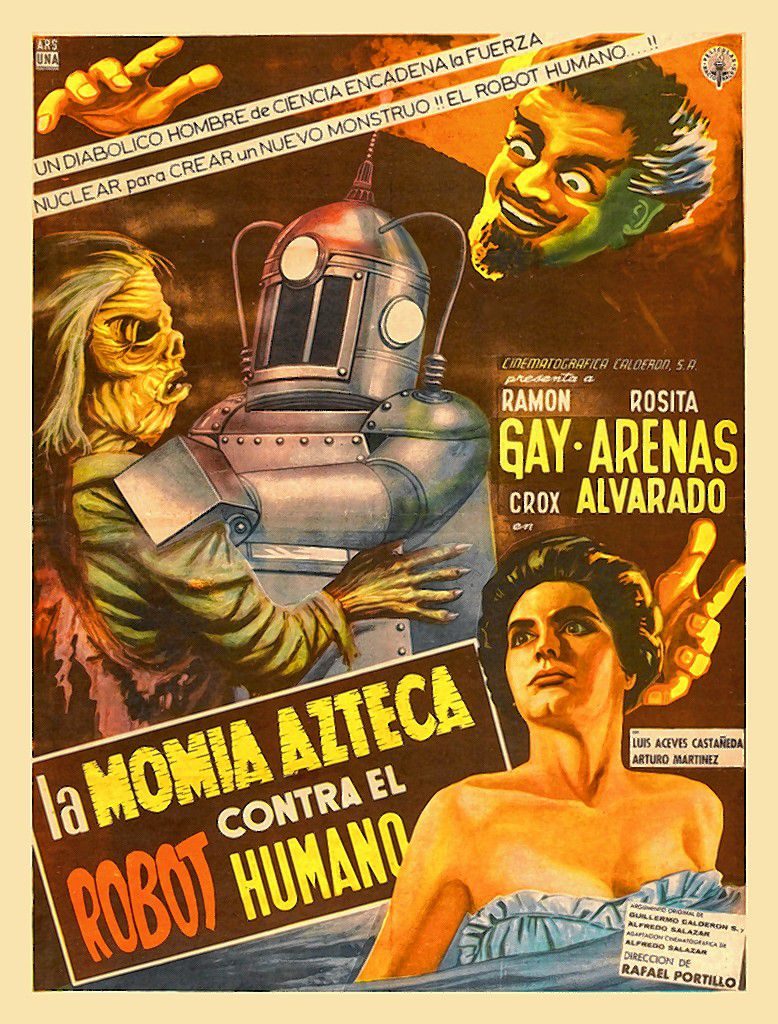 It’s New Year’s Day. With no idea what to watch, I thought I’d go through one of my leaning towers of DVDs and see what I might come up with. Down at the musty bottom of one of the stacks, I found a trove of movies I’d never watched. My candidate for viewing: The Robot vs. the Aztec Mummy, a 1958 gem from Mexico which you might be familiar with under its alternate titles, “The Aztec Mummy Against the Humanoid Robot” or “The Aztec Mummy vs. the Human Robot.”

The lengthy recaps come in the form of flashbacks, as Doctor Almada regales his comrades with thrilling tales of his encounters with an Aztec mummy. As it turns out, an Aztec mummy is no different than an Egyptian one. They both follow typical Mummy 101 lore: For daring to love a princess, a warrior is mummified and placed in a tomb via a tedious ceremony that would turn anyone’s brain to dust. (The princess gets off easy — she only has her heart removed.)

The Doc, it seems, originally discovered the comatose mummy after slogging endlessly through some unimpressive ruins. He removed a bracelet from the corpse and — to no one’s surprise — the warrior returned to life. Also no surprise: Mayhem ensued. OK, that’s the first recap. In the next movie, the mayhem continued, as the mummy tossed an evil madman named Krupp into a pit of rattlesnakes and burned his henchman’s face with acid. (Not as cool as it sounds.)

The problem here is that, watching all these flashbacks, the movie is almost halfway over. What a lazy way to cut down on the budget!

Finally we get to the new material: Krupp reappears (with nary a snake bite on him) and returns to the mummy’s tomb. Krupp’s now-disfigured henchman suggests they off the mummy while he is dozing — light him on fire, force him to watch Mariah Carey on New Year’s Eve, anything. Krupp throws logic out the window and comes up with a much better plan: Why not build a robot with a human head and have him brawl with the mummy while Krupp steals his priceless bracelet?

Constructed in a laboratory whose main source of power appears to be a bank of 40-watt bulbs, the robot slowly (VERY slowly) comes to life. Sadly, it looks as though it couldn’t go 10 rounds with the Tin Man from Oz. Undaunted, the bargain-basement android attacks the mummy.

Will this be the creature clash of the century? Let’s put it this way: There is more action in an episode of “The Golden Girls.” The robot and mummy gently push each other back and forth a few times, while our mechanized man sprays some sort of radioactive mist. The fabled Dr. Almada arrives in the nick of time to cut the robot’s power, and the mummy crumples him like the cheap piece of aluminum he really is. The musty Aztec then shuffles off for another well-deserved nap before the next sequel.

There is a reason this DVD languished at the bottom of the heap, and I found it out the hard way. Well, it is below freezing outside, so I’m joining the mummy for a good long snooze.