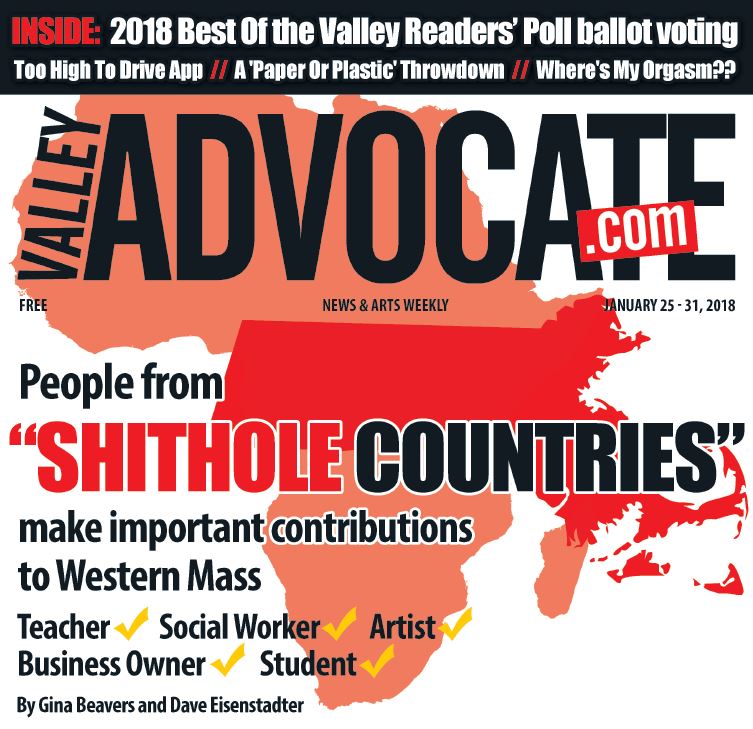 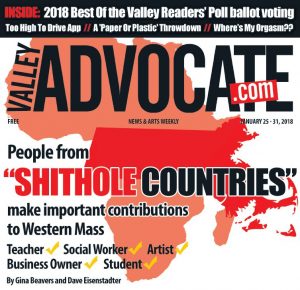 It was a good idea to devote the lead article in this week’s Valley Advocate to providing evidence of the contributions of immigrants from countries that Donald Trump has inexcusably maligned and insulted. But you also did something inexcusable, by repeatedly using his offensive language — first in the front-page headline and then in the article. While it was necessary to repeat Trump’s racist language to report it originally, to continue to use it as you did was hurtful and degrading, with no possible justification other than using shock value to attract some readers’ interest. Shame on you.
— Amy Leos-Urbel, Northampton
Editor’s note: This issue was something we discussed quite a bit before making our decision. The feeling we all came to was that laying bare Trump’s hateful language is a necessary part of the story. To censor his words would be to protect him from his own mouth, a courtesy we did not feel he earned. —Dave E.

Score One for Constructive Dialogue

In response to “Connecting with Red State America: Reflections from a meeting between Western Mass and Eastern Kentucky” (January 18-24, 2018):

This is a wonderful initiative — well done Leverett and Letcher County, Kentucky. Well done Paula Green. You’ve done it again. I would love to have been observing this process in action. Your communities are generating transformative people power and hopefulness and fearlessness in response to fear-driven, xenophobic politics.
— Kevin Clements, website comment

Those Female Mental Cases and their Hatefest

Dave Eisenstadter brought his one-year-old son to the latest women’s march. He called the obscene hatefest “inspiring.” No child should be exposed to mental cases in pussy hats. Nice parenting, Dave!
— Tim Grant, Bernardston
Editor’s note: I take this as a compliment. — Dave E.