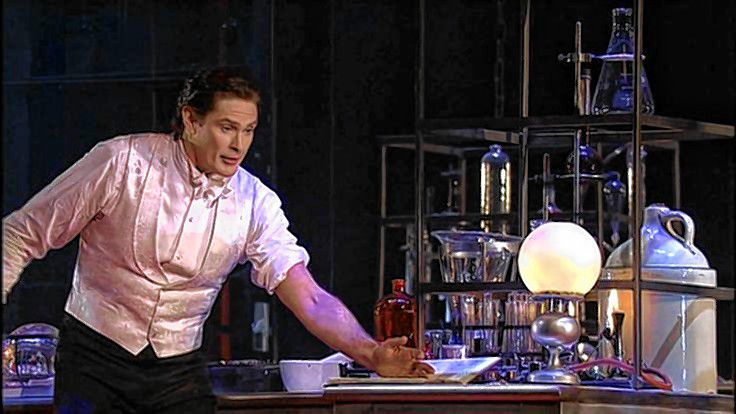 A change of scenery is in store for this month’s column. We will leave the flickering screen of the cinema and head for the bright lights of Broadway. Yes, instead of a classically bad movie, I’m going to focus on a stage adaptation of a classic novel as captured live at New York City’s revered Plymouth Theatre. Ladies and gentlemen (and all gender variations thereof), Blaise’s Bad presents “Jekyll & Hyde: The Musical,” starring the incomparable David Hasselhoff.

When I purchased this DVD, I assumed it was just another horrible ’80s-era TV Movie of the Week. Only later did I discover that it was a taping of a Broadway show — and one that apparently had a long run at that. But the “Baywatch” hunk as the star? Hey, I was in for the long haul! 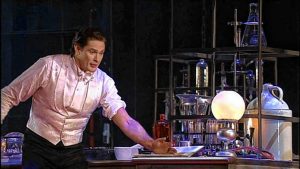 We start out with Dr. Jekyll (the Hoff) mourning the recent death of his father by breaking into sorrowful song. Now, I know the Hoff has many albums to his credit, but then so does William Shatner, so we might be on shaky ground here. But lo and behold, this train stays on the rails and even leads into a sequence of some pleasant show tunes featuring Jekyll’s fiance, Emma, an actress named Andrea Rivette, who has a nice, if somewhat shrill, set of pipes.

The plot, at first slow moving, picks up considerably when Jekyll enters a brothel to soothe his nerves. Here we meet a lady of the night known as Lucy (an incredibly talented Coleen Sexton), who rips into a showstopping number complete with metal prods and gyrating devils. OK, all this is well and good — but where’s Mr. Hyde?

Jekyll decides to test his new “duality serum” on himself, but first has to sing the musical’s big number, called (of course) “This Is the Moment.” It starts off rough, like a rejected Meat Loaf song, but then the Hoff tears off his jacket and really lets it fly. Darned if he doesn’t pull it off.

Soon Jekyll is writhing on the floor in pain from the concoction — a scene which, sadly, brought back memories of Hoff’s real-life drunken struggle with a cheeseburger (available on YouTube). But it’s when he emerges as Mr. Hyde — without the aid of makeup — that Hoff really shows off his singing and acting chops. I can’t believe this is the same man who once warbled atop the Berlin Wall (and so took credit for bringing it down).

Hyde goes on a rampage and confronts a crooked man of the cloth — and subsequently sets him on fire. Whoa! “J&H the Musical” just kicked it up a notch! And here it is only the end of Act I.

Well, we’re running out of space, so here’s a Reader’s Digest version of Act II: Hyde proceeds to wipe out half the cast during a musical number aptly titled “Murder.” Emma and Lucy sing a duet trying to outclass each other in octaves so high they could shatter the windows of the Vatican. Lucy’s bedtime tryst with Mr. Hyde is (surprise!) not the romantic interlude she hoped it would be.

Saving the best for last, Hoff sings a duet with himself, alternating between his two personalities, lurching from left to right, greasy hair obscuring his deadpan mug. Outstanding stuff, I kid you not! Finally, Jekyll walks down the aisle with Emma. When the priest intones “Speak now or forever hold your peace,” guess who pops up to object to the union?

After the cast take their curtain calls (Sexton gets the most applause), Hoff thanks the audience by telling them how far he’s come from his days working with beach bunnies and a talking car. Who would have thought that the man who once let SpongeBob ride on his back was capable of this? Take a another bow, Hoff — you’ve earned it.