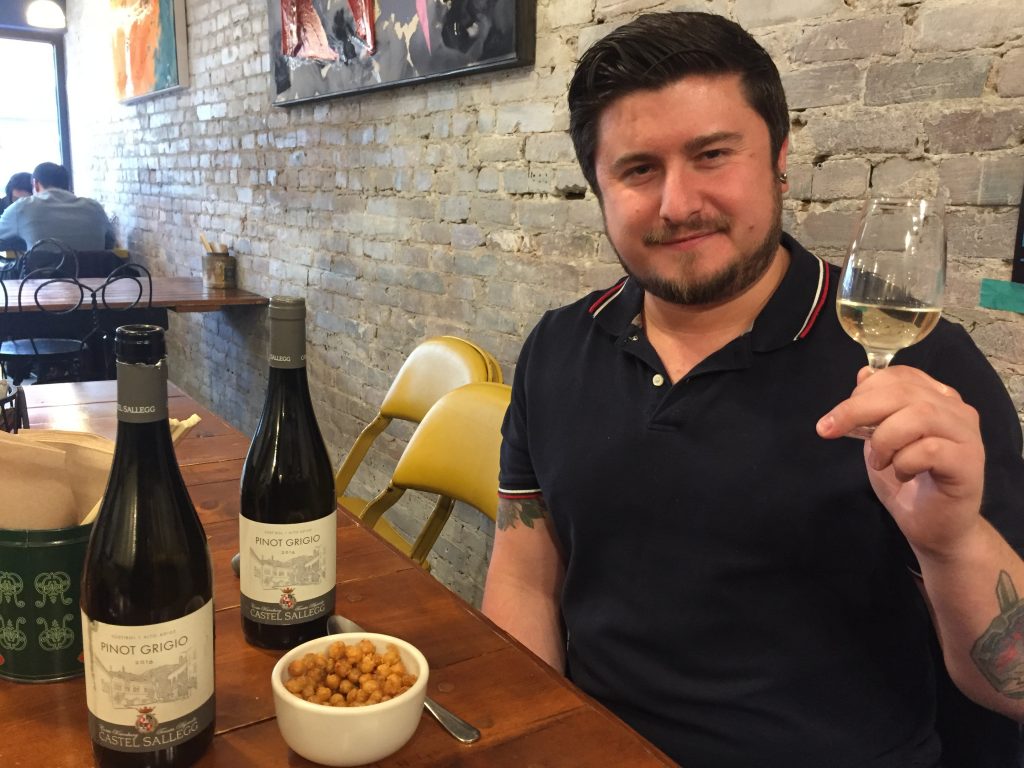 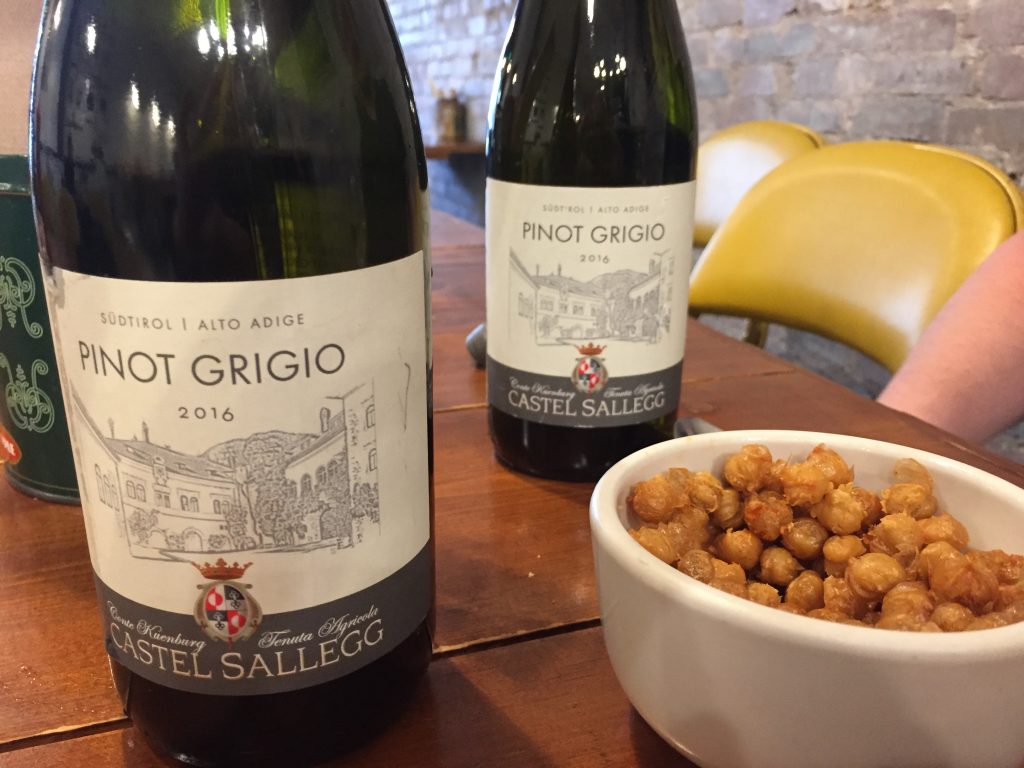 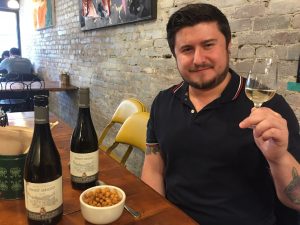 “Part of me contacting you wasn’t that I think Pinot Grigio is so amazing. It’s that a great wine is about the place and it’s about the people who make it.”

Cristiano Gazzara from Northampton took up that gauntlet and gently smacked me in the face with it on Facebook. When I looked him up, I found out he was a wine salesperson. Chris made a somewhat indecorous comment about the store where I buy and sample a good deal of wine. Sour grapes, perhaps? I damned with faint praise one of that store’s “quaffable” $25 Pinot Grigios, from a region of Northern Italy called Alto Adige. That wine was the best of the most boring.

“And that’s really why I did reach out — as much as I was a little bit naughty on Facebook. What made me reach out was that you tasted an Alto Adige. I thought that was so smart of those folks to put that in front of you, because it is gonna be better than other Pinot Grigio. But when you thought that it wasn’t elegant enough, and I saw the price point I thought ‘Well, jeez. Let’s give $15.99 a whirl’ because I know my wine is beautiful.” 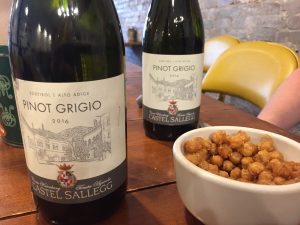 Chris is a wine purveyor for Charles River Wine Company. And while I specifically mentioned in my column that I’d prefer to hear from wine civilians, Chris’ chutzpah peaked my interest. He invited me to drink a bottle of Castel Sallegg Pinot Grigio from his portfolio at Belly of The Beast in Northampton. Belly of The Beast is not BYOB, but Cristiano knows a guy.

“This wine comes from the Alto Adige, like the other wine you almost-sort-of liked. Castel Sallegg is the producer. It’s an actual castle on Lake Caldaro. It’s still owned by a Count. But there is this cooperative of farmers who hang out, grow the grapes, make the wine. When I pour this for people, it tends to change people’s minds. It’s also a good deal less expensive than the other one you liked. $15.99 on the shelf. You walk into a wine shop and you’ll see a $15.99 Pinot Grigio, and you’ll taste it, and you might think it tastes like any swill that a Real Housewife would drink. But if you know a little about regions and producers, you will find something better.”

And I admit, this Castel Sallegg is better than most Pinot Grigio I’ve had. It was at least as good as the $25 Pinot Grigio I tried the last time. It was extremely light in color — almost clear with a hint of straw-yellow.

“I really love that sort of bee pollen, honeyed factor. It smells like a field full of daisies. It’s got a long finish for a Pinot Grigio, which doesn’t usually happen. I’m getting a lot of salinity. I love that in a white wine. A wine like this is so versatile. It goes with everything from oysters to chicken souvlaki pocket.”

We were drinking the wine with spicy chickpeas. A little too intense a flavor for the Castel Sallegg, but delicious in and of themselves.

“What’s special about this one is it’s grown right on this volcanic lake. It has that sandy, loamy soil. The better the terroir (the natural environment in which a wine is produced), the more interesting the wine. The smaller the production, the more interesting the wine. It’s not just about the grape. It’s about finding the place where the people working with the grape are making it better than anybody else.”

It’s “The People” that can make any wine more interesting. From the people who make it, to the people you drink it with. So who is this interesting, plucky young wine rep, Cristiano Gazzara, who decided to challenge my Pinot Grigio gripe?

“I grew up in Falmouth. I’m Italian. My family is from the North End. Before that Bologna. My grandmother had a wine press in the basement. I don’t think they knew it at the time, but my uncles used to make [what is now referred to as] a Super Tuscan kind of thing.”

“We were allowed to have a little bit of wine with dinner on special occasions. By the time I was in my early 20s and everyone wanted to drink, I was like ‘Let’s do wine!’”

Before spending a decade working his way up from seafood to marketing at Whole Foods in Hadley, Chris had come here to UMass to study Art History and Communications. It’s practically the perfect major for someone selling wine. Wine is the history of civilization in a bottle.

“You are actually the first person to agree that my degree makes sense for what I do now. Art history is looking at the same painting over and over and trying to decide what’s different about it. Compare and contrast. When I started at Whole Foods it was like, ‘try all these Cabs and Malbecs and figure out which one is the best.’ I grabbed Karen MacNeil’s Wine Bible. I started tasting through the regions. That’s the best advice I ever got. Taste each individual region, then go back and compare a French Malbec to an Argentinian Malbec. That’s how you’re going to learn. Start with the regions.”

Chris left Whole Foods after 10 years and starting doing social media and nightlife productions. He still organizes the Trotting Fox dance nights at The Basement. But in the daytime he sells wine from small producers, from every wine growing region across the globe, for us to buy here in the Valley and in the Berkshires.

Cristiano Azzara is interesting. Cristiano’s particular Pinot Grigio is at least somewhat interesting. But as delicious as this wine is, I’m still not convinced that Pinot Grigio has was it takes as a grape to compete with so many more interesting grapes.

I’ll give him that. But comparing this to other wines from Alto Adige — even the Tramin I recently wrote about — I’m not convinced Pinot Grigio can compete. Pinot Grigio can barely compete against its nearly identical twin, Pinot Gris over in France. But as a wise wine sage, Macalla Silver, commented to me on that same Facebook thread where Cristiano called me out:

“Pinot Grigio is to Pinot Gris what Beaujolais is to the Cote d’Or. There are times when wine of a lighter style does not take center stage, but is a back-up singer that just has to sing “ohh la la” to the food and friend chatter. Set you, young man, amidst a summer gala of women like flowers, deep in the Northern Italian countryside, and Pinot Grigio would be all you wish for.”