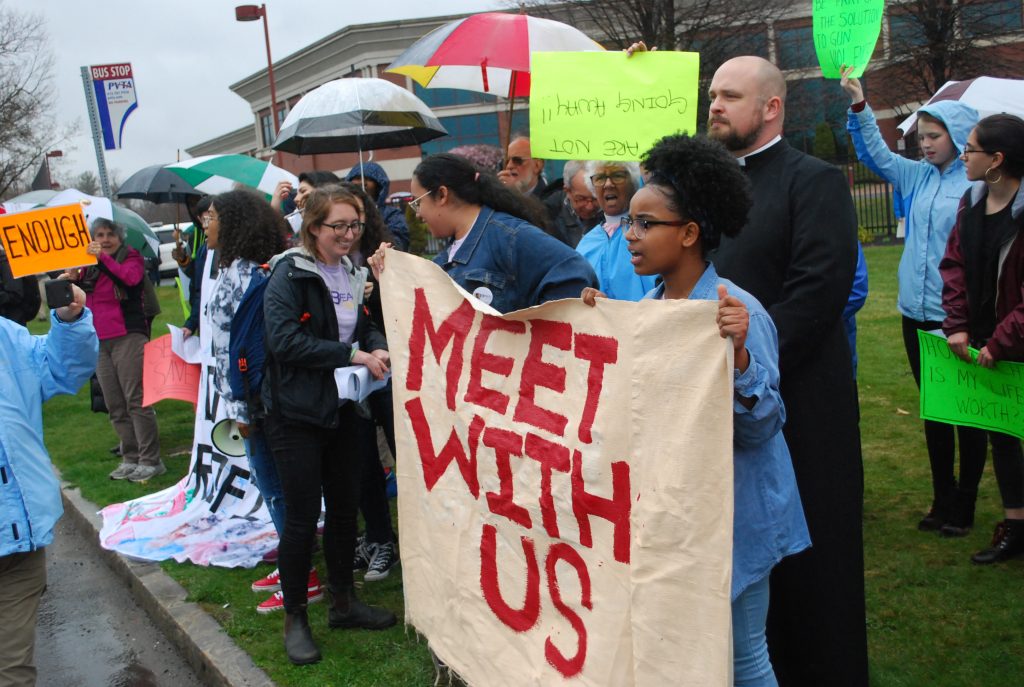 Students from Springfield and Boston gathered alongside local faith leaders and grassroots organizers held a second protest on April 27 against Springfield-based gun manufacturer Smith & Wesson after activists called on the company meet with them to create a dialogue about ways to end urban gun violence, and were met by silence.

Local students want to meet with P. James Debney, CEO of Smith & Wesson, and delivered an initial list of demands to the company’s security staff on March 14, vowing that they would return in 30 days if a meeting was not planned.

Smith & Wesson did not respond to the student’s list of demands, including finding possible ways the company could be part of the solution to end gun violence, reparations to urban communities impacted by gun violence, and halting the manufacture of the M&P15 rifle, which was used in mass shootings such as the 2012 Aurora, Colorado, shooting where 12 people lost their lives.

When students walked to the Smith & Wesson security entrance on April 27 to deliver the same list of demands, no one was present, including security staff, the students told the crowd of more than 50 people who rallied at Memorial Field, across the street from Smith & Wesson’s global headquarters on Roosevelt Street in Springfield.

Despite this, students and other activists vowed to return to protest Smith & Wesson in another 30 days, on or after May 27, if a meeting between local activists and Debney does not take place in the upcoming month.

Smith & Wesson communications personnel have not yet responded to a request for comment regarding the protest.

Aysha DeJesus, a 15-year-old freshman at Central High School, told the Valley Advocate after the protest that she wanted to be part of the protest because she’s afraid of gun violence in her city.

“I’m scared of walking down the streets,” she said. “I’m scared of going to school. I’m scared of what’s going to happen next … Guns are the biggest problem we have now with weapons. I just want everything to be good. I don’t want anybody to be scared.”

DeJesus said she’s seen someone get shot in the past.

“Hearing that gun go off, I don’t wish that on anybody,” she said. “What we’re doing here is good, but I think that everybody needs to come together.”

Political leaders that chose not to stand with student protesters include U.S Sen. Ed Markey and Congressman Richard Neal.

Bishop Douglas Fisher of the Episcopal Diocese of Western Massachusetts said protesters should be prepared to continue protesting into the summer and beyond in order to secure a meeting with Debney.

“This issue is too crucial,” he said. “It involves lives. We’re here to say that the adults support you. I think a lot of us were there for our children to help them do their homework. We were there to take you to basketball practice … We will be here for you now as you take on this crucial issue, as you stand against the powers to say, ‘We stand for those who are vulnerable in our streets [and] in our schools,’” Fisher said.

Students from the eastern portion of the state also shared their experiences about gun violence in their communities.

Chandler Shippee, a student from Chelsea High School, said during the last six months there have been 36 shootings in Chelsea.

“These shootings have affected people of all ages – our family, our friends, people at our own school,” Shippee said. “Our schools, which are supposed to be safe havens for us, have been filled to the brim with death.”

Gitu Degefa said students in Chelsea fear being killed by a stray bullet in their sleep or being shot in a drive by shooting.

“There’s people shot by my house … There was a 13-year-old boy who was shot in his sleep,” Degefa said. “You would think that your house is the safest place there is, but it’s not due to guns. These kids are just regular kids like us. They have their own aspirations and they are taken away from them in a blink of the eye.