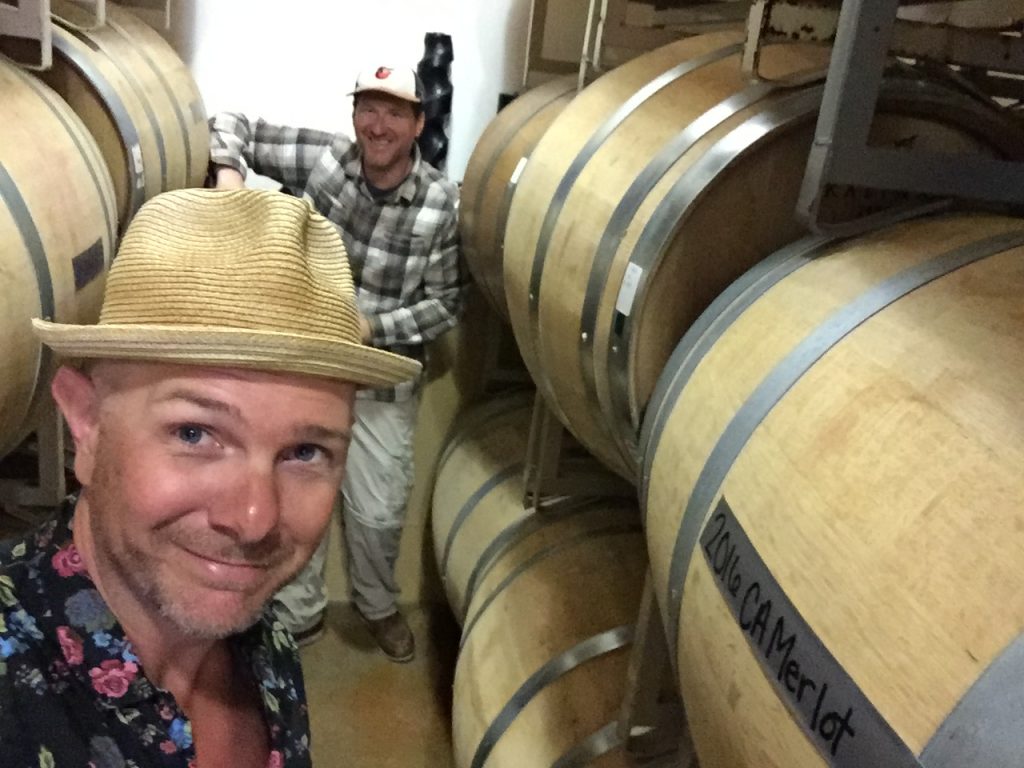 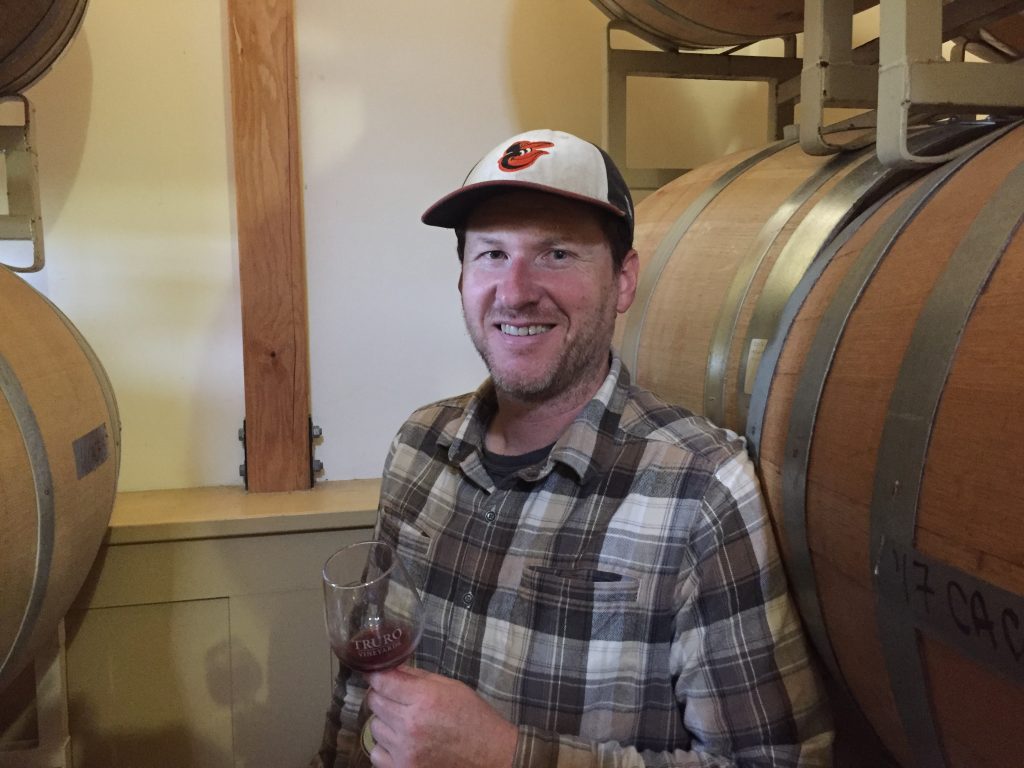 Massachusetts is no Bordeaux. It’s no Napa. Perhaps with global warming, someday it will rival the great wine regions of the world, which is why I keep a tire fire burning in my backyard at all times. But given the limitations of our climate, are our burgeoning vineyards in Massachusetts able to produce great wine?

If you read my last column, you’ll know I was recently illegally drinking canned wine on the beaches of Cape Cod. Route 6A is one of my favorite highways to drive in all of New England. And just before you make it to the clenched fist of Provincetown on the flexing arm which is the Outer Cape, you’ll see on your left a canopy of terraced vines growing grapes at Truro Vineyards. So, while on vacation, I decided to do a little “work” and set up an interview with a winemaker who is aiming to make great Massachusetts wine. 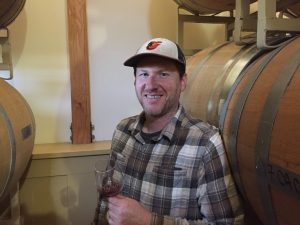 Milan Vujnic is the head winemaker and vineyard manager at Truro Vineyards. Originally from Croatia when it was still part of the former Yugoslavia, Milan grew up surrounded by a culture of viticulture, where it was common for nearly every family to have their own vineyard and cellar. Rather than rebel against the family tradition, Milan pursued a B.S. in Enology. He traveled the world making wines in New Zealand and Canada, spent a decade in Napa, and has been making wine in Truro for the last two years. Why would a winemaker leave Napa? Milan says, “Napa is great, but things have been kind of figured out there. I like to be in an area that is still growing — that’s rapidly developing.”

And while the industry is still growing here, the actual GROWING here can get tricky.

At Truro, Milan is growing Chardonnay, Cabernet Franc, and Merlot, as well as a hybrid grape created for our Northeast climate called Chardonelle. He says “Chardonnay is doing really, really well here. We don’t have a hard time getting it to ripen like we do with some of the reds.” But it isn’t the harsh New England winter that is the problem. “The problem that we experience on the East Coast is not necessarily the cold weather,” Milan said. “It’s that the season is short. That means that our grapes will have a lot less time to ripen than in warmer areas. We’ll see how it pans out for this season. It’s been colder than the last two years.”

Another challenge for Truro Vineyards is acreage. Seeing as the Cape is slowly but surely slipping into the sea, land is scarce. So how is Milan meeting the demands of his consumers? “Three and a half acres is obviously not going to satisfy our 12,000 case annual production,” he says, “so we purchase a lot of grapes, mainly from California but also from New York State.” But the grapes he is working on out in the fields hold a special place in his heart. “You spend a whole year tending to those grapes. Fighting them. So you develop a connection with those. But getting grapes from other regions gives you a lot of opportunity to do things you wouldn’t otherwise be able to do.” Things like blending grapes and creating styles more familiar to the American palate. 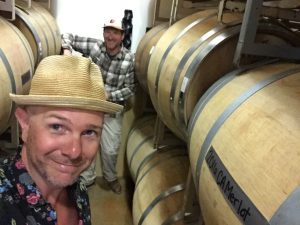 Monte getting ready to drink from the bunghole. Monte Belmonte photo

One of the reasons I like writing this column is that I can use my privileged position to do things like convince winemakers that I should be able to drink right from the barrel. Something, dear reader, that this relative newbie in the world of wine had yet to experience. Milan grabbed his wine thief — which is like a fancy turkey baster — and a couple of glasses and we toured the barrel room. Milan inserted his baster into the bunghole (actual wine terminology, but also cross reference Yana Tallon-Hicks’ column to make sure this is acceptable) and drew the wine out of the barrel and poured it into my glass.

My goal was to see if I could taste the youth of wine more recently barrelled and compare it to wines that have been aging for longer. I tried a 2016, then a 2017 Petit Verdot from their barrels. If the 2016 tasted like a rare steak, the 2017 tasted like beef tartare. Petulant, wild and raw. It just wasn’t quite ready. But how much of barrel tasting is art, and how much is science? Milan has what looks like a laboratory in the back room, with beakers and other fancy science things that are probably just other types of beakers. Or perhaps Bunsen Honeydews. And he is definitely using those tools and those science skills. But he says “I like using numbers just to make sure nothing goes wrong. But good wine can’t be made just by numbers.”

And their wines are good. I stayed in the orbit of Truro’s grape-only wines, and avoided anything blended with cranberry or other fruit. But will wine snobs, myself included, ever seek out a Massachusetts wine first when the world is our oyster when it comes to pairing wines from across the globe with Wellfleet Oysters down the street? Milan says, “A lot of people would just dismiss wine that come from certain areas before they even give them a shot. And that’s something that’s been a challenge, not just for New England but for many other regions.” And that is because wine is just not what we’re used to drinking here or at least from here. “In New England it’s cider, beer, spirits,” he says, “But I think wine has a lot of potential. There are a lot of really, really, good wine makers here in Massachusetts. We just have to shake off that stigma that is attached to the wine.”

It was amazing talking and tasting with someone whose life has been dedicated to cultivating and crafting quality wine. And it’s inspiring to hear Milan talk about the potential he believes Truro Vineyards and the viticulture of New England writ large has in in its soil. But if you are still someone who scoffs at wines that are made in places don’t have “Chateau” written on the label, why might you consider something from Truro, Massachusetts?  “It’s a locally produced product. If people are into drinking local, as they are eating local, it’s certainly something to consider. All of our wines are made with a lot of love and passion. And they can come here and enjoy this beautiful property.”

Shop local. If that is an ethos you believe in, sometimes that means choosing labels that are unfamiliar and perhaps pushing the limits of your comfort with price. I can testify that their $25 estate Chardonnay is great with the oysters I got from the next town over. “It’s seafood’s best friend,” he says. And never fear Western Mass winemakers, now that vacation is over and I’m back in the 413, I’ll be coming to taste from your bunghole soon.