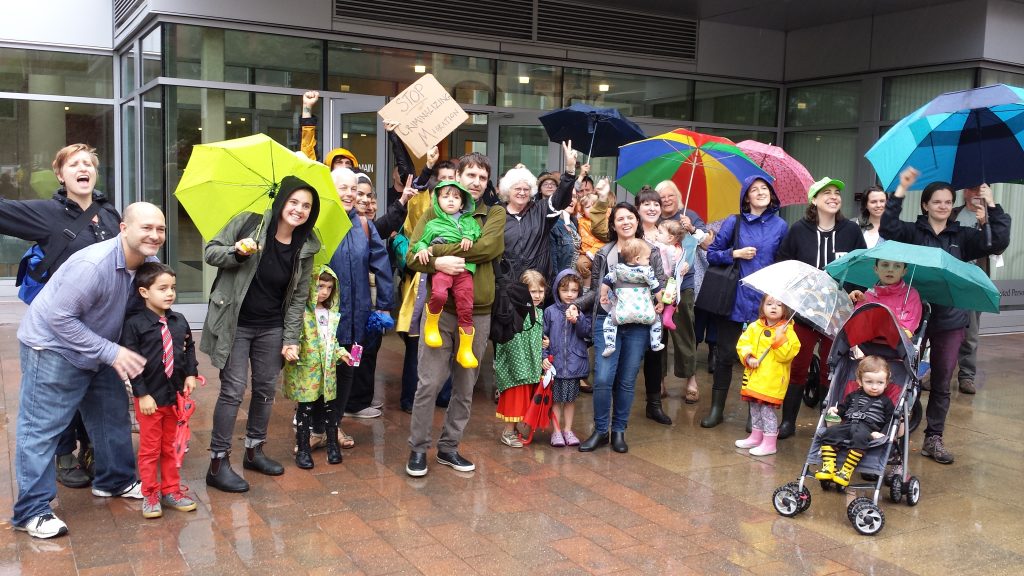 In an effort to combat families being torn apart through American immigration policy, activists with the Pioneer Valley activist network supporting undocumented immigrants called Sanctuary in the Streets came with their children to a small rally at the Immigration and Customs Enforcement (ICE) office in Springfield. 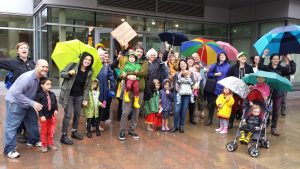 About 30 activists, including several small children, stand in the rain outside the ICE office in Springfield on Thursday, June 28, 2018.

Sienna Baskin, an immigrant rights attorney who lives in Northampton, brought her daughter to the event, held Thursday, June 28, at 1550 Main St., the building in which ICE’s Springfield office is housed. The event exceeded her expectations because it allowed for children to be involved, she said.

“There were ways for them to connect with what was happening,” she said. “It’s always hard to explain to children when there is something terrible happening in the world and they are very young.”

Baskin said she explains to her daughter, who is nearly 3 years old, that she is safe and that she will not be separated from her parents, but that there are other children who are having to deal with a different experience.

“I said in some places in this country kids are being separated from their parents, and she said, ‘why?’ And I said, ‘because the parents are being taken away,’ and that we think families should be together. We think parents and kids need each other and so we’re here to talk about that and tell the world about that.”

President Donald Trump’s administration instituted a “zero tolerance” policy at the border earlier this year, changing established policy by prosecuting anyone who is found to be crossing the border, even those with small children. Because U.S. law does not allow children to be held in federal prisons, the result was that 2,300 children were separated from their parents.

About 20 adults participated in the Springfield protest and there were about 10 small children, as well.

Baskin said it was important for her and other activists at the Springfield event to convey to families being separated that they are fighting for them and support them.

“I’ve visited detention facilities for children and I’ve represented families that are trying to reunite with their children and what’s happening right now is really heartbreaking and it’s keeping me up at night,” she said. “I’ve been crying a lot and I just needed to do something.”

Rose Bookbinder, an organizer with the Pioneer Valley Workers Center, Jobs with Justice, and Sanctuary in the Streets, said the event began with parents being called to do something about the separation of children from their parents seeking asylum at the border.

“We came out here today to the ICE office to call for an end to the separation of families in all its forms, in all the ways that state violence inflicts separations in communities,” she said, listing deportation, police brutality, and mass incarceration as examples.

Bookbinder said it was important to have children at the event, and brought two of her own.

“We are building another future for America through our children, instilling better values and morality,” she said. “But we’re not going to wait for them because we know it is our obligation … to rise up and do more.”

Ghazah Abbasi from Northampton, a member of Sanctuary in the Streets, attended the event to send a message to politicians to abolish ICE.

“I think it’s great that there is finally information that is being released about how the U.S. state treats immigrants,” she said. “Trump has made things worse, but Obama laid the foundation for this.”

Abbasi said children have been held in cages and that these problems existed before Trump.

“If the Democrats want to say that they are not like Trump, they need to call for the abolishment of ICE. It’s a racist, colonial institution,” she said.

Abbasi said she was pleased to see 28-year-old progressive Alexandria Ocasio-Cortez beat establishment Democrat Joseph Crowley in a New York City-based congressional primary after calling for the abolition of ICE.

“I really appreciated how she ties identity politics to class politics, and to say it’s people of color, and it’s immigrants and black people who suffer the most and women who suffer the most under capitalism,” Abbasi said. “They are the ones who are most exploited.”

After activists chanted and sang songs, the Springfield Police were called and the activists exited the building to the rainy sidewalk outside.

Sgt. Richard Randolph, one of four officers dispatched to the building, said police were called by officials in the building because activists refused to leave.

Outside, activist Veronica Valez of New Britain, Connecticut, said she drew inspiration from the other activists present. She told them all while speaking above the sound of the rain.

“You guys give me so much hope,” she said. “I think we can make a new America for the first time, and it starts like this.”

Bookbinder said the activists expected the police to be called and had committed to exit the building peaceably when the police arrived.

“We did call for ICE to come down or to let us up, and they didn’t,” she said.

ICE spokesman Khaalid Walls responded to a press inquiry about the protest with the following statement: “U.S. Immigration and Customs Enforcement (ICE) fully respects the Constitutional rights of all people to peacefully express voice their opinions.”

“It’s going to be an incredible, beautiful action,” she said. “I’ve been privileged to be a part of some of the conversations of what it is going to look like.”