Sanctuary in the Streets a Growing and Vital Movement 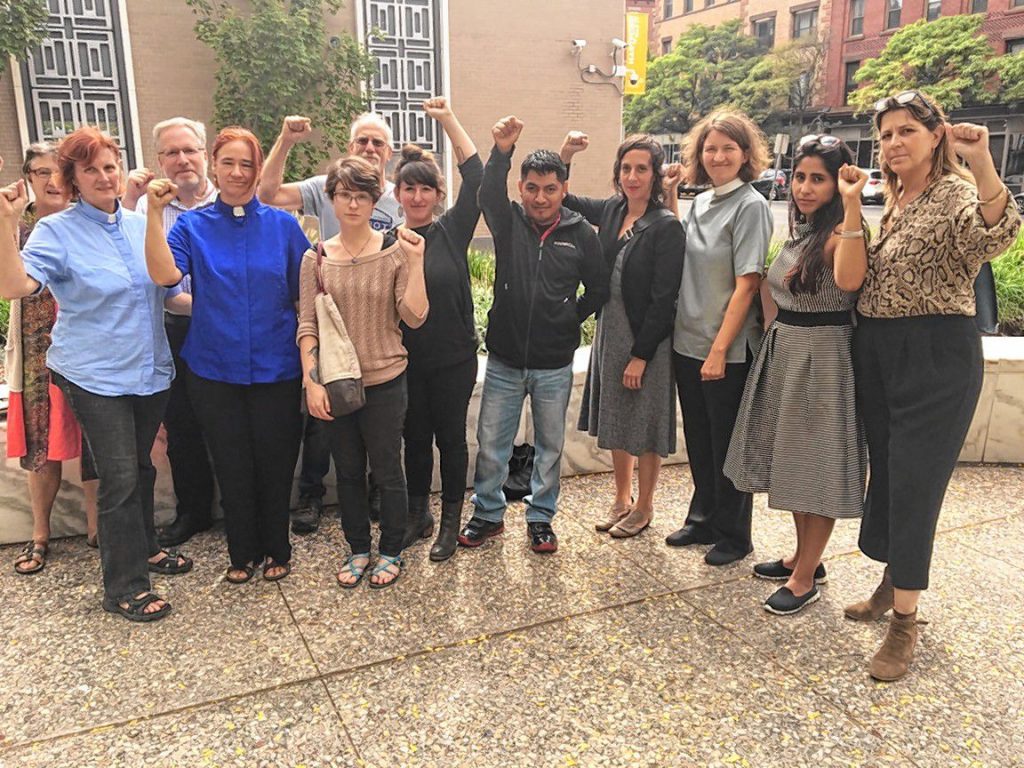 Lucio Perez Ortiz, center, who is facing deportation, stands with activists and members of the clergy outside the Immigration and Customs Enforcement (ICE) office in Hartford on Thursday, Sept. 14. 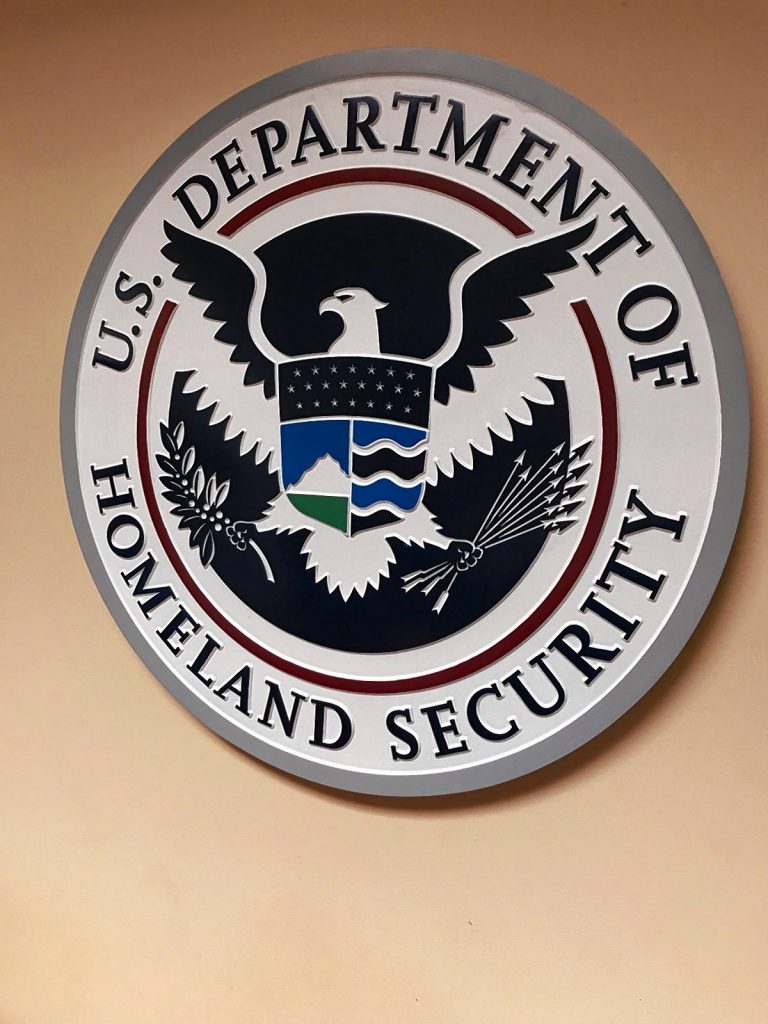 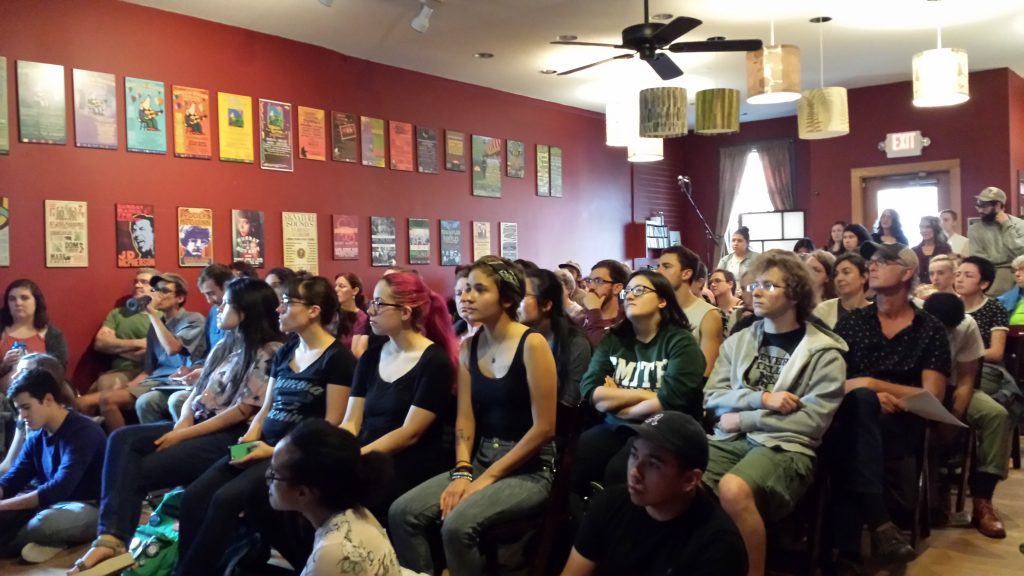 A recent meeting for Sanctuary in the Streets fills the Parlor Room on Sept. 11, 2017. Dave Eisenstadter photo

Perez, who has lived and worked in the United States nearly 20 years and has a wife and four children — three of whom are U.S. citizens in Springfield public schools — is nearing the final legal stages of deportation. ICE officials told him that he had to produce a plane ticket back to Guatemala — which he fled in 1999 to escape violence — or be detained. With a ticket, he would only have to wear a GPS ankle bracelet for ICE to monitor his whereabouts. 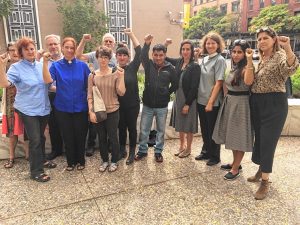 Lucio Perez Ortiz, center, who is facing deportation, stands with activists and members of the clergy outside the Immigration and Customs Enforcement (ICE) office in Hartford on Thursday, Sept. 14.

“I feel more secure, safe, and motivated because I know that I’m not alone and I have the support of a big group,” Perez said in Spanish through a translator. “We are all struggling and fighting together. And working together, we can triumph.”

It is that sentiment that shows how important such a network of activists and clergy is. And the fact is: these folks are just the tip of the iceberg of a continually growing group of people fighting against needless deportation in response to the policies of the Donald Trump administration.

A note on how Perez found himself in this predicament: It started at a Dunkin Donuts. Perez was getting his children drinks and his wife was using the bathroom. The parents asked the kids if they wanted to come inside, but they declined and stayed in the car. Minutes later, when Perez and his wife returned, they were confronted by police who cited them for child abandonment.

That was in 2009. The charges were quickly dropped when the facts of the case came to light, but Perez’s situation was forwarded to ICE. Under the Obama administration, he was allowed to stay in the country, but now under the Trump administration, the previous system for allowing stays for low-priority unauthorized immigrants — otherwise known as productive members of society like Perez — was abolished.

It is a sad moment we are in that resources are being used to tear apart families and deport hard-working people like Perez, and that Perez is a priority for deportation. According to Rose Bookbinder, a lead organizer with the Pioneer Valley Workers Center and Jobs With Justice who accompanied Perez to Hartford that day, Perez’s likelihood of winning the right to stay through the courts is slim.

“He has had a series of negligent lawyers,” Bookbinder said as she accompanied him to Hartford. “Ones who took his money and then disappeared.”

His current lawyer is working to extend his stay of deportation.

The visit to the ICE office was an emotional experience, according to Diana Sierra, another Pioneer Valley Workers Center activist. Bureaucrats, including some who are Latinos, did their work, which she described as committing violence against families.

“I am a Colombian immigrant and was undocumented for a long time, and it is heartbreaking to see ICE using other Latino workers to do their dirty business,” Sierra said.

At the same time, she was moved by hearing the clergy leaders and activists accompanying Perez singing and praying together all the while in the ICE office room, which contained a portrait of Trump.

Perez received his ankle bracelet and is now back with his family awaiting news on his legal stay. If it is not approved or extended, he will have to board a plane for Guatemala on Oct. 19, leaving his family behind.

Perez said he is relying on activists as well as his church to help him win an extension of his stay.

“The goal of our church is to work together to help when someone is facing a problem like the problem I’m facing,” he said through a translator. “I don’t want to be separated from my family. We want justice and we think that if we work together, we can accomplish justice.”

The injustice he fights is not just in the area of deportation, but also of wage theft, he said. He knows of employers who have hired undocumented workers to finish a job and then refused to pay them after the work is done, knowing the employees will be too scared of deportation to go to the police. 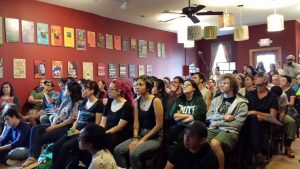 A recent meeting for Sanctuary in the Streets fills the Parlor Room on Sept. 11, 2017. Dave Eisenstadter photo

As for Sanctuary in the Streets, the movement is ever-growing. Bookbinder and Sierra facilitated a meeting on Monday, Sept. 11, that more than 100 people attended. In addition to accompanying folks like Perez, they have established a 24-hour hotline and a network of 1,800 activists to rally on short notice.

To have so many people in a room — standing room only — supporting a cause is impressive. How much more impressive it is to have a room full of people willing to commit volunteer hours and do the hard work of organizing and breathing life into a movement.

When confronted with the end of the Deferred Action for Childhood Arrivals, as announced by the Trump administration earlier this month, and continued inaction on broader immigration topics from Congress, local action and activism is continuing to gain momentum — educating people along the way of the harm our current immigration system is causing to families and productive residents of the region and beyond.

Monthly meetings will continue. The next one is Monday, Oct. 2, at 6 p.m. at the Parlor Room in Northampton.