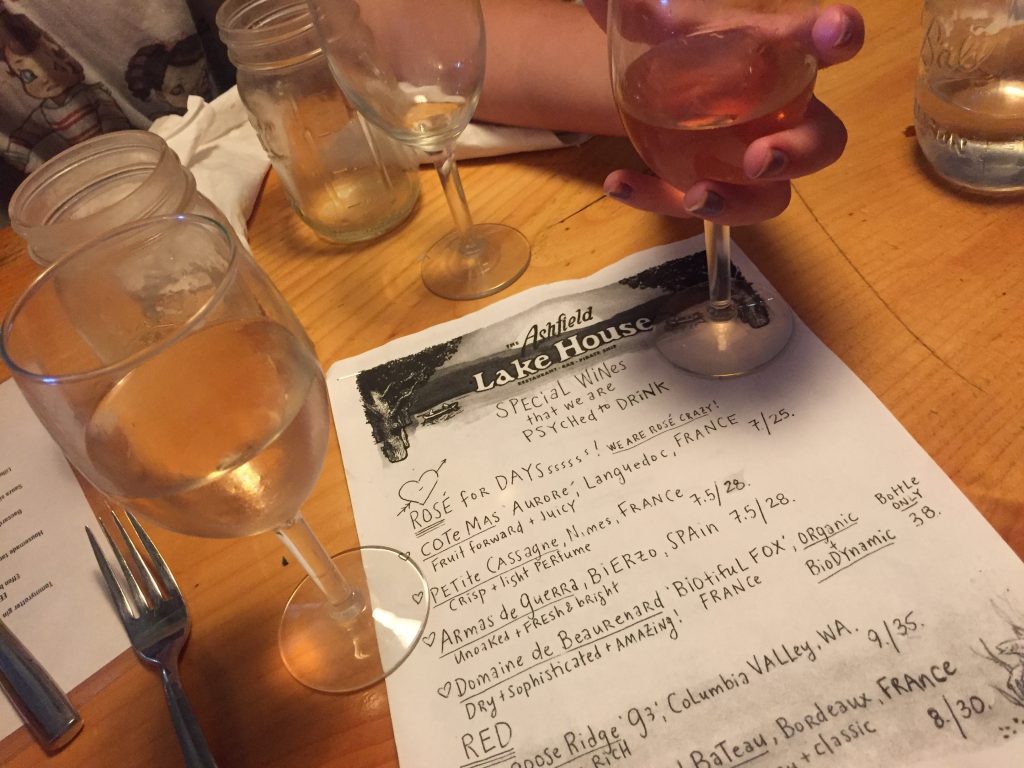 As an aspiring wine snob, ordering a glass of wine at a restaurant can be a risky business. Your abysmal choices may range from overly-oaked Chardonnays to mega-purple, mass produced, fruit bombs to the dreaded Pinot Grigio poured from bottles that have been open two days too long. That’s why it was a pleasant surprise when The Belmontes piled into a booth at The Ashfield Lake House and I took a look at their rosé list.

The Lake House was taken over in 2015 by a couple of friends of mine, Dre and Chris Rawlings. They are both artists who went to RISD. Chris creates incredible natural stone swimming pools and has now channeled his craftsmanship into the reformation of a building that has been an Ashfield townie mainstay for decades. And Dre, who has for years created-as she might describe them “amazeball” pop-up art happenings in places like the Franklin County Fairgrounds, the indoor soccer bubble in Bernardston, and in the horse barns at Stoneleigh-Burnham, now spins her artful magic into the Lake House menu. Not to mention all of the wicked hip mini-concerts, performances, and beachside throwdowns she throws down. Dre and I have a penchant for day drinking and she’s been inviting me to come drink her rosés during the day with her for a while now. As The Belmontes had tickets to Double Edge Theatre’s Summer Spectacle We The People, it seemed as good a time as any to drink the pink down the street from Double Edge at The Ashfield Lake House.

If you do decide to day-drink on a weekday at The Lake House, you might see some Ashfield old-timers at the bar sipping Bud Light in their Boston Bruins caps. This should be a warning sign that perhaps you should avoid the wine list at an establishment like this and stick to The Champagne of Beers. But, like the Town of Ashfield itself, the Lake House menu is full of surprises. The handwritten wine list is replete with “Dre-isms” like “special wines that we are PSYCHED to drink” and “rosé for DAYssss!” and “We are rosé crazy!” Dre does have other wines on the list, but it was the rosé that caught my attention.

The Côté Mas from the Languedoc in France is very good, but one that I’ve had before and is a popular choice, both in restaurants and stores, so I skipped that one and ordered a glass of the Petite Cassagne from Nimes, France and a glass of the Armas de Guerra from Bierzo, Spain for my wife, Profesora Belmonte, and me. The Profesora claims red wine makes her feel sick. She likes white wine. And rosé is as far as she will go towards the rubicund. We shared both glasses. Alright, we both shared two rounds of both glasses.

The Petite Cassagne is a blend of Grenache, Cinsault, and Syrah. It’s light, crisp, refreshing and fun with hints of white peach, strawberry, and cranberry on the palate. It looks more salmon colored than properly pink and would probably go really nicely with the Lake House roast salmon fillet or maybe the kale & romaine Caesar salad. It did pair well with bites of the BLT and kids fish & chips that I stole from my children.

The Profesora and I split the Lake House’s Lucky Devil chicken sandwich with spinach, chipotle aioli, bacon, and something called “devil crema” (sometimes it’s better not to ask). This meal went better with the bigger rosé, the Armas de Guerra. It’s a rosé of 100% Mencia. “Armas de Guerra” literally translates to “weapons of war” and, if you’ll pardon the pun, this wine is the bomb: bold, peppery, with the taste of an almost overripe strawberry and a hint of clementine, with a finish that lasted well into Double Edge Theatre’s magical realism. I was also delighted at how well it paired with a last minute decision on a digestif of mozzarella wedges in marinara. It might not be the perfect pair with Dre’s French fries but you must get the fries. They are some of the best in the Valley.

Before we left for the theatre, I popped into the kitchen to pick Dre’s brain about her rosé fetish.

“Drink as much rosé as possible!! It’s pink and it’s my favorite color, I’ll start there. It’s SO, SO, SO, seasonal. And SO refreshing.” Dre’s way of talking represented in print does not do justice to Dre in real life. She exists at an energy level somewhere between a frenetic lead singer of a band and the large hadron collider.  “Rosé is really versatile. It can be your dessert or your aperitify thing.” Dre invents words. “I picked each one because I loved it for what it is individually about. And each one has a different flavor profile and a different story. We’ve got the juicy, juicy one-the Cote Mas. The Spanish one is crispy and peppery. They all have a dry finish…” I interrupt to make a sexual euphemism about “dry finish.” “OH MY GOD!” she exclaims before bursting into her Wicked Witch of The West-like cackle, a type of laugh we actually both share. And then she finishes, dryly. “Yeah, exciting stuff, rosé. I’m excited by the one we have by the bottle, made by organic vintners, made by women.”

I picked up the rosé that the Lake House serves by the bottle-Domaine de Beaurenard “Biotiful Fox”, named for its biodynamic farming method and the wild foxes that live at the estate, located in Chateauneuf du Pape. The estate has been family run for seven generations and at least a couple of the winemakers over those generations have been women. I brought it home to eat with some grilled pork and braised veggies that the Profesora made for Sunday dinner. It made for a nice pair. The “Fox” is mostly Grenache and a little Syrah, which brought some pepper notes and some nice berry flavors. It was an excellent accoutrement to a dinner on the patio on a breezy summer night.

I need to stress once again that good rosé, while pink in color, is a far cry from the cloyingly sweet White Zinfandels (also pink) that my grandmother, grandmother-in-law, mother, and mother-in-law prefer. Although, I think I have converted my mother-in-law into a real wine drinker. A good rosé is dry, fruity, a tad spicy or herby, and screams summer. And the thing about The Ashfield Lake House, and Ashfield in general, is that they, too, scream summer: brunch at Elmer’s, the Lake House’s outdoor deck, jumping off the dock into the lake itself, the natural waterslide at Chapel Falls, Double Edge’s Summer Spectacle, Dre actually screaming “SUMMER!!” in her inimitable way. I feel like I’m on summer vacation every time I go to Ashfield. And rosé is the style of wine that best suits summer. Go take a staycation, day drink some rosé off of the Lake House’s wine list, and they’ll give you a pass to stay and take a dip in the lake. Ashfield, rosé, and summer-as Dre might exclaim, “YASSSsss!!”