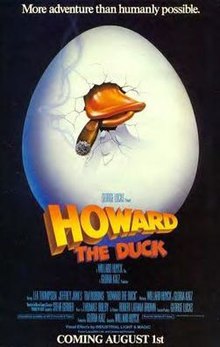 On its opening weekend, Avengers: Endgame took in a staggering $1.2 billion. I’ve seen it and now I am caught up in the frenzy. I even scoured the area McDonald’s and got 12 of the 24 avengers happy meal toys. The clerks there cringe when I come strolling through the door.

Yes, Disney/Marvel are raking in the big bucks, but it wasn’t always this way. The first movie based on a Marvel comic was 1944’s Captain America. Obvious choice, since the Captain was starring in a popular serial at the time. The second theatrically released movie was a real head scratcher. Instead of using a top-tier character like Spiderman, it was thought fortunes could be made by centering the film on Howard the Duck.

In the comics, Howard resembled his more famous cousin Donald, but was a cigar chompin’, foul-mouthed bird from another world who likes to call women “toots.” I once wore a Howard the Duck T-shirt to Disneyworld, and Goofy came up to me and gave me a thumbs down. The good old days. Anyway, Howard was an odd duck to be cast in a movie, but producer George Lucas didn’t think so. Sadly, the movie turned out to be no golden goose. 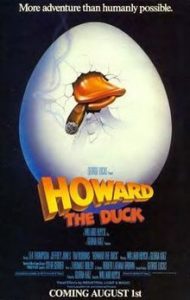 Our story begins with Howard, (played by stuntmen in a suit) relaxing in his easy chair on his home planet of Duckworld, oogling the latest copy of Playduck. Posters proclaiming the movie Breeders of the Lost Stork adorn the walls. His female avian neighbor loves topless baths. Life has been treating Howard just fine. Suddenly a dimensional portal snatches up our macho mallard and sends him hurtling toward Earth. Upon arrival in Cleveland, of all places, he rescues new wave singer Beverly (Lea Thompson) from a group of thugs. The two misfits become buddies, and they explore the wonders of inter-species relationships.

This is all fine and dandy, and Howard even gets a job cleaning drains from used hot tubs. Bev becomes smitten with Howard after finding a condom in his wallet, and wants to go for the moon. Howard’s feathers perk up, but he has no wish to do the deed with what he calls a hairless ape. This tryst raises the ire of Bev’s manager, who Howard must defeat in a knife fight to keep her affections. Luckily Howard knows quack-fu. And you thought this movie was no good.

Howard is introduced to Bev’s bumbling nerd buddy Phil (Tim Robbins), who thinks he can send our wayward duck home. During an experiment, another portal is created, this time bringing down a dark overlord, who possesses the body of scientist Walter Jenning (Jeffrey Jones). Here is where Lucas stumbles, and turns the film from a flirty romp into a effects-laden turkey. Jennings uses his newfound powers to go on a rampage, destroying more cars than the Dukes of Hazzard could do on their best day. Meanwhile, after almost hurling while being served eggs in a diner, Howard and Phil chase after Jennings in a small airplane contraption for what seems like eons. “Duck,” Phil warns Howard after flying under a low bridge. “Proud of it,” Howard chirps back.

It all ends with a battle between Howard and the overlord that is more suited to an Avengers finale. Howard joins Bev’s band and does a (ahem) duck walk across the stage.

Audiences mostly steered clear of this bird-brained flick. Lucas had to sell off his budding new SFX division to pay the bills, which later became Pixar. Undaunted, Lucas would go on to create Jar Jar Binks.

The Marvel film universe survived this debacle and went on to produce the epic Avengers series. Howard actually has a cameo at the end of the Guardians of the Galaxy movie, proving you can’t keep a good duck down. Rocket Racoon, Groot, and even Buzz Lightyear wouldn’t be here without Howard waddling along first. Take a bow, web-foot!