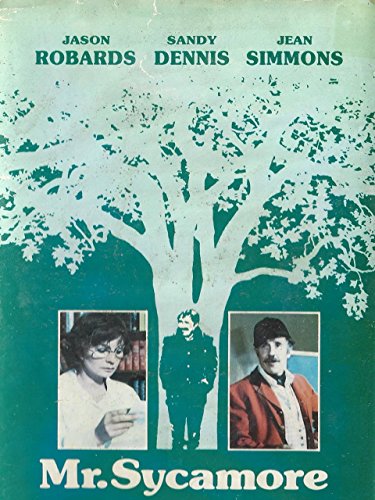 What do you do when you have a dead-end job, a nagging wife, and no respect from the people in your neighborhood? Most of us would go to Las Vegas and hope for the best. But not Mr. Sycamore — his keen idea to escape the rigors of life is to undergo metamorphoses into a tree.

Jason Robards stars as John Gwilt, a downtrodden mailman who is less interested in delivering packages than conversing with the various shrubs on his route. “You want to be a sapling all your life?” he berates a particular puny tree. Not surprisingly, he receives no reply, but John is undaunted. He returns home every night to his devoted but mousy wife Jane (Sandy Dennis) who suspects hubby is slowly turning bonkers. A stop at the local library finds John fascinated by two things. First, a book which tells of a myth about couple who turned themselves into trees. The second is the foxy middle aged librarian Estelle (Jean Simmons), who saps all his willpower. Nevertheless, the tree saga wins out, so John ‘plants’ himself in his back yard….

Watching Jason Robards standing ankle deep in soil does not lend itself to exciting viewing. Fortunately, John has to take breaks every now and then, presumably to hit the bathroom, because yellow bark would seem unseemly. His wife invites him inside for a little afternoon delight, but he is interested in a different type of woody. He meets the librarian for a romp in the park, where he imagines Estelle is riding horseback like Lady Godiva. Then reality sets in, and he realizes he is no towering redwood, but just an old twig. So its back to the back yard.

A pair of milkmen inform him that there is another man who has transformed himself into a tree. Branching out, John agrees to go on a road trip to find him. Alas, the tree-man is in an asylum, where John certainly belongs at this point.

Back with his toes in the dirt, John is offered booze from a passing car salesman. Soon, images of our totally smashed hero are plastered all over the daily newspaper. Undaunted, he exclaims, “I think I am growing roots!”

Suddenly, a tornado roars through the suburban town. John is buffeted and uprooted, and is sent flying to the scene of his faux pas with the librarian. His exasperated wife follows, and what does she find? A mysterious new tree. Well hush my mouth — somehow the old coot pulled it off.

Readers, I think I will go plant myself in my back yard and become a magnificent oak. But with my luck, I will probably end up as poison sumac in someone’s garden. Such is the life of a tree.