Editorial: The Life of Frances Crowe

As all the world knows, Frances Crowe is an activist institution in the Valley, and well beyond. And that’s why, even having lived the full life she did, the community still feels her passing deeply. But in her 100 years, we can all find some inspiration. 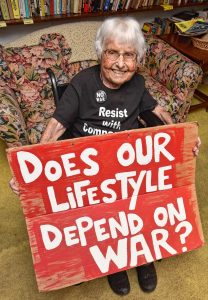 I’m proud to have had Crowe featured on the Advocate cover just last month — police leading her away with arms held behind her back and a smile on her face. Behind her, our art director Jennifer Levesque placed a large nuclear symbol, representing one of her biggest lifelong fights against nuclear weapons and nuclear energy. Next to Crowe were the words “74 years since Hiroshima and Nagasaki: Local anti-nuclear activists speak.”

That’s far from the only time the Advocate has featured Crowe. Even in my short tenure with the paper, I remember another feature we did in part on her called “Radical Moms: Using the power of motherhood to make political change.” At the time, Crowe told reporter Chris Goudreau that she didn’t pay federal taxes. “I file and I send the money to the Iraqi Children’s Art Exchange that will go to the cancer hospital in Baghdad. I send the money to the victims of war,” she said.

Crowe has been an inspiration because of the humanitarian causes she champions and the way in which she carries out her protests. In her most recent column for Hampshire Life magazine in the Daily Hampshire Gazette, she detailed how in the 1980s she carried a baby bottle full of her own blood to dump onto a newly commissioned nuclear submarine — a mockery of the popular practice of smashing a champagne bottle on the prow of a new ship. And she succeeded. Even the tears at her clothes, the pulling of her hair, and the scratching she endured on her arms and face from the crowd were worth it, she said. She was doing her part to protest the proliferation of nuclear weapons.

Getting arrested was part of life for Frances Crowe, and she said she couldn’t count the times she was arrested. But here’s how she characterized the amount: “not enough.” Truly, how much more inspirational does it get?

To me personally, she also showed great trust and compassion. As a reporter, I rarely had luck interviewing Crowe on the phone, but she did agree to meet with me in person a few times. Being at her home was a thing of wonder — from the multitude of activist lawn signs in her front yard to the giant portraits of inspirational women and large stacks of books in her living room. 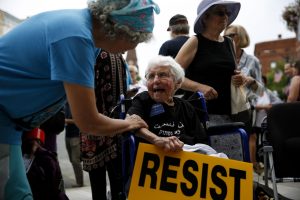 My most recent interaction with her was unannounced. I had a couple of questions about her Advocate cover article and time was short. After I couldn’t reach her by phone or email, I decided I’d try to knock on her door. When I arrived, it was hanging open in the breeze, and she yelled from her kitchen for me to come on in. For someone so knowledgeable about hate and violence in the world, she also had great trust in fellow people. And she was sharp as a tack, even at 100 years old. Out of her vast library, she knew the exact book the answer to my question was in, and the name of the person referenced who would answer it. When I checked the spelling with her, she gave a different spelling than was listed in the book. When I looked it up later, her spelling was correct. The book was wrong.

Frances Crowe is no longer among us as a physical being in this world. But when we look up to the now-closed Vermont Yankee nuclear plant, and listen to progressive radio show Democracy Now! playing weekdays on WMUA, it’s not hard to see her legacy.