Letters to the Editor: Tennessee Gas project puts my neighborhood at risk

In response to “Could it happen here?: Gas explosion in Merrimack Valley hangs over new pipeline efforts,” published Oct. 3-9. 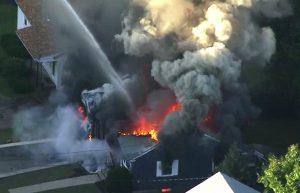 In this Sept. 13, 2018 file image take from video provided by WCVB in Boston, flames consume the roof of a home following an explosion in Lawrence. (WCVB via AP)

I live in a neighborhood in Longmeadow. The homes are not large and luxurious as those most people think of when they hear “Longmeadow.” The homes are small ranches and capes built in the 1950s. The home owners are single, couples, and many more are retired and have raised their families here. Many have children and many have pets-dogs, cats, and even a few chickens.

All of this will be destroyed soon if plans proceed for Tennessee Gas Company to build a meter station on a wooded strip of land behind the Longmeadow Country Club tennis courts and abutting the yards of homes on Fairway Drive and a home on Hazardville Road.

A report and slides presented by an engineer at the August 2019 town meeting, show that the effects of the gas would be deadly. Among the horrifying information, the released gas is harmful to everyone; children, older people, and anyone with heart problems, asthma, emphysema, and other lung ailments. Even disguising the smell doesn’t make it any less deadly.

If there were an accident at the meter station, the report and slides from the town meeting showed a yellow circle where every home and each person within the circle would be destroyed. In the next circle shown, the homes would be destroyed and each resident would be badly burned, but would potentially live.

This situation refers to an incident at the meter station, not in the pipeline to be installed along Shaker Road and Laurel Street and into and through Springfield.

The Longmeadow Select Board (except for Marc Gold) should be ashamed of themselves. Do they not believe in air pollution?

Is it because they cannot see it? Do they not even care about the health and safety of residents? Why did they run for office if they can’t stand up to fight to protect the residents they represent?

If you are as concerned as I am about this station, please contact: longmeadowpipelineawareness@gmail.com and Sen. Eric Lesser and Rep. Brian Ashe.

In response to “A New Routine: Whately strip club to reopen with queer-friendly policies,” published Oct. 10-16. 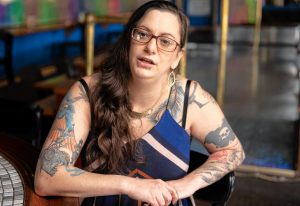 Bella Vendetta, the manager of Club Castaway in Whately, will oversee nights with queer and male dancers. Carol Lollis photo

Welcome to Whately! Good to see this kind of diversity.

” ‘Unfortunately we have a Constitution and this is freedom of speech,’ [Whately Select Board Chairman Jonathan] Edwards said at a meeting in June 2018.”

“Unfortunately we have a Constitution” is *really* not something I want to hear from a government official, no matter how lowly.

Eh. As someone who grew up in that neighborhood and stills knows it intimately well, I just don’t see the market. I doubt folks from more liberal parts will travel for it. That area and the surrounding are old, white and largely conservative.

Despite the longtime corruption and mismanagement of cities like Springfield, and the highly questionable comment from Whately Select Board Chairman Johnathan Edwards about it being “unfortunate” we have a “Constitution,” the Valley is actually a pretty good place sometimes.

In response to “Backtalk: Pelosi for President — Can she be drafted?” published Oct. 10-16.

This has got to be the most brilliant piece of satire I’ve ever seen… she is joking, right? Incredibly hilarious. Hope she does stand up at Packard’s Comedy on Wednesday (9:30) sometime soon.

Unelectable in all 50 states! C’mon!

She has the knowledge; Trump doesn’t. She is brilliant; Trump and the Republicans are afraid of smart women like her. Go Nancy, save America from Trump.