Two years. That’s how long it’s been that Springfield resident Lucio Perez has been forced to live in sanctuary at the First Congregational Church in Amherst. Before taking the extraordinary step to escape an immoral deportation order — based on a minor charge that was later dropped — Perez lived and worked for nearly two decades in the United States. Originally from Guatemala, he is married and has three children who are U.S. citizens. He has lived in western Massachusetts since 2009. 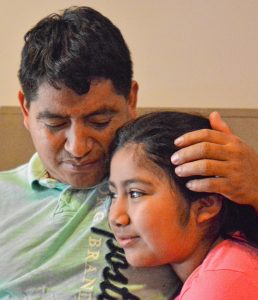 Lucio Perez, of Springfield, who is an undocumented immigrant who was facing deportation until he took refuge at First Congregational Church of Amherst Oct. 18, spends time with his daughter, Lucy, 8, Saturday at the church.

“It’s not fair because I have not done anything bad to people in this place,” he said in Spanish on Oct. 19, 2017 — the day he announced he was seeking sanctuary in the church. “I’ve only come to work and to work hard to give a better future to my children.”

About 100 people were gathered outside the Amherst church that day, singing songs and expressing support for Perez. But few could have realized that he would still be there two years later with no hope on the horizon for a good resolution of his case — apart from the prospect of new and humane leadership in this country.

In that time, much has happened. In May of 2018, Perez left the safety of the church and was taken to Cooley Dickinson Hospital in Northampton with a case of appendicitis. Twenty cars full of supporters, including Northampton Mayor David Narkewicz, accompanied him back to the church, where he was safely returned.

Other Valley residents have also taken sanctuary, including Irida Kakhtiranova, a Russian immigrant who has been living in sanctuary at the Unitarian Society of Northampton and Florence church since April 2018, and Gisella Collazo, who took up sanctuary at the South Congregational Church in Springfield for a time before receiving a stay of deportation. Contrary to the support showed by Narkewicz, Collazo and the church she was in endured attacks from Springfield Mayor Domenic Sarno, who attempted to strip the church of its tax exempt status following the sanctuary announcement. 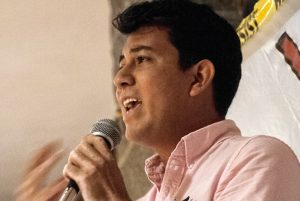 Hampshire College student Eduardo Samaniego addresses a vigil in Northampton on Tuesday evening, September 5, 2017, held in the wake of the termination of the DACA program announced by Attorney General Jeff Sessions earlier in the day.

Also in that time, Hampshire College student Eduardo Samaniego, an undocumented immigrant rights advocate originally from Mexico was arrested, detained in reportedly cruel conditions, and deported to Mexico. He is appealing his case.

Perez spoke with Daily Hampshire Gazette reporter Dusty Christensen this week, and though he is grateful for the protection the church affords him, he described his life in the church in similar terms to a prison term.

Perez keeps his spirits up through his faith, and offers Spanish lessons to community members as a way to earn money, but the past two years have worn on him.

“I don’t wish on anyone what I’m going through,” he told Christensen. “Not even my worst enemy.”

Meanwhile, the perpetrators of our current inhuman immigration policy — the hallmarks of which are family separation and using immigrants and refugees as scapegoats — remain in power. As Perez has endured years of only being able to see his family a few times a week when they visit him at the church, Donald Trump and his cabinet of criminals have been allowed to continue to set policy in this country.

We can never again elect leaders on any level who will deny the rights of people — immigrant or otherwise — to be with their families. It was years of blockades to immigration reform by a Republican-controlled Congress under President Obama that allowed us to get to this place. That’s why it is so important to pass legislation like the Safe City Ordinance in Greenfield, which prohibits local officials from enforcing this immoral immigration policy.

And we must celebrate the efforts of our local churches and community organizations like the Pioneer Valley Project and Sanctuary in the Streets, who have fought at every turn for the people who live here.

First Congregational Church Rev. Vicki Kemper recently said, “For now, sanctuary is a day-by-day ministry of the church and the larger sanctuary community. We continue to work and pray for the day when Lucio can be home safely with his family in Springfield.”

Correcting the grave mistake of allowing our immigration policy to get so out of hand must be our day-to-day charge, as well. We owe it to Perez and the many more like him forced into cruel situations.