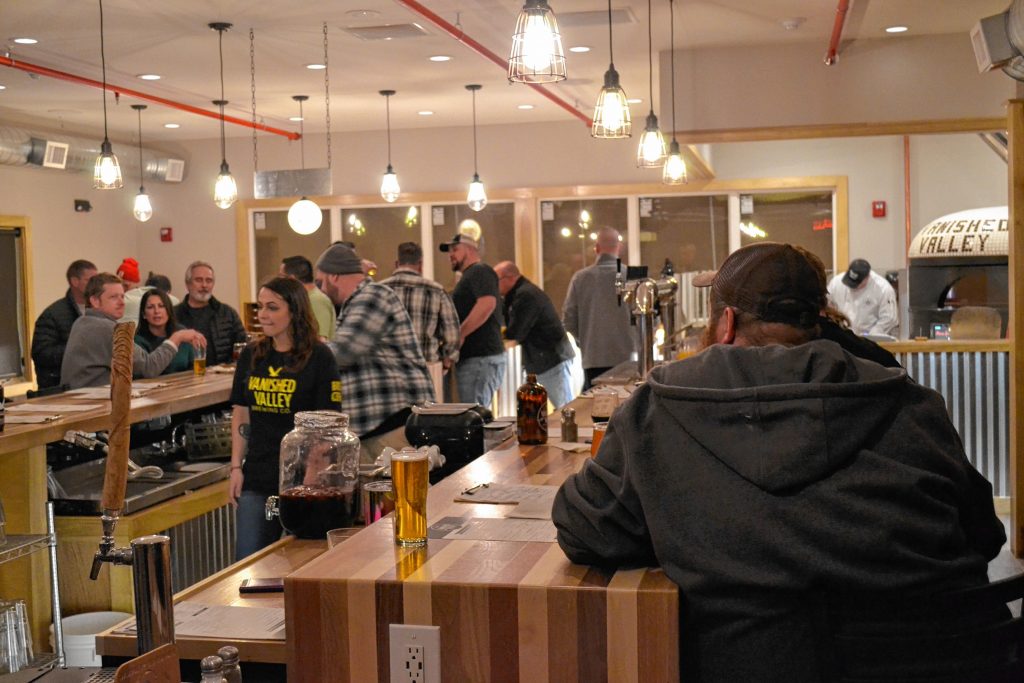 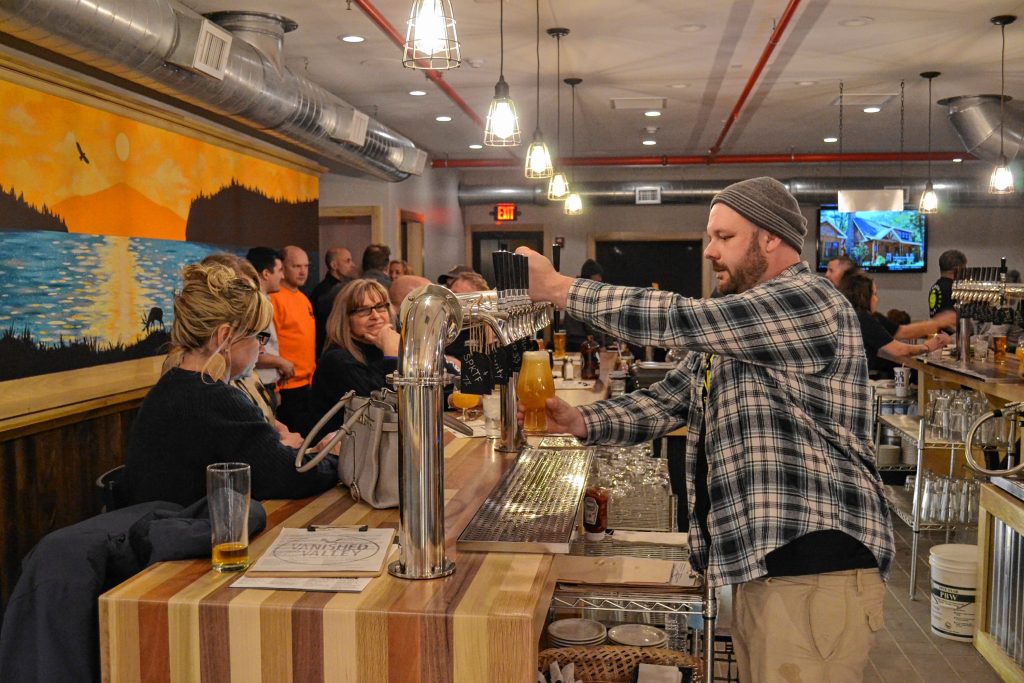 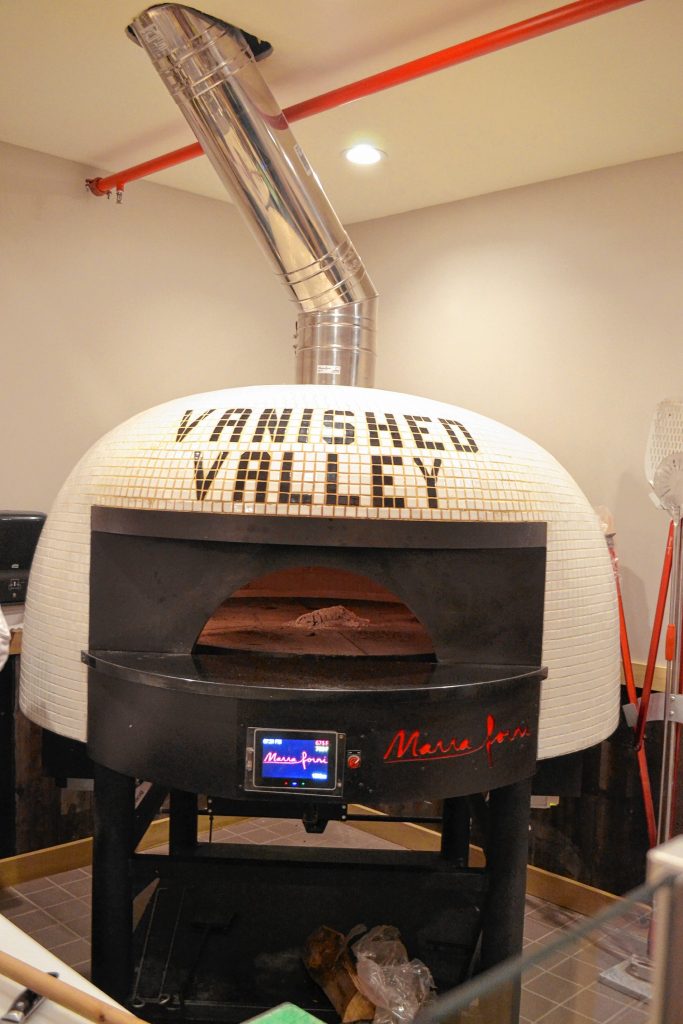 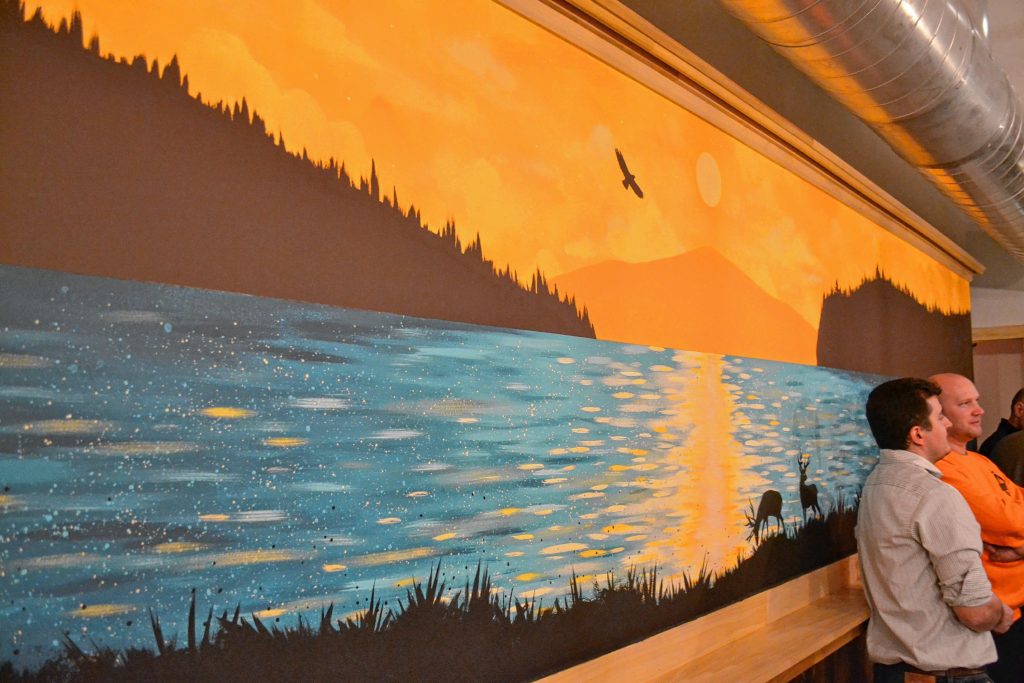 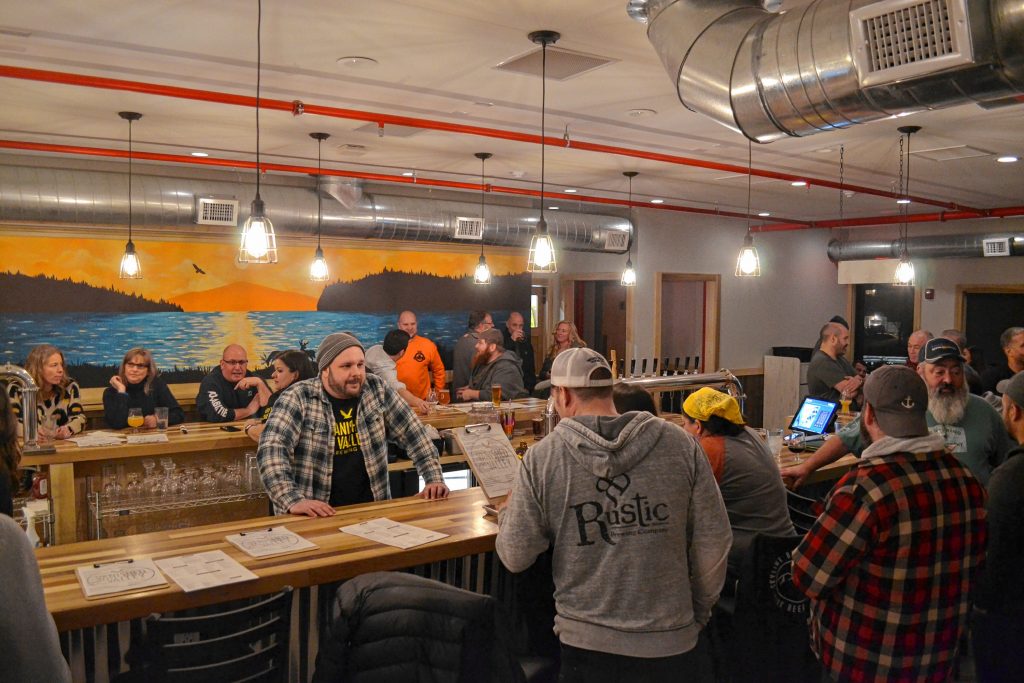 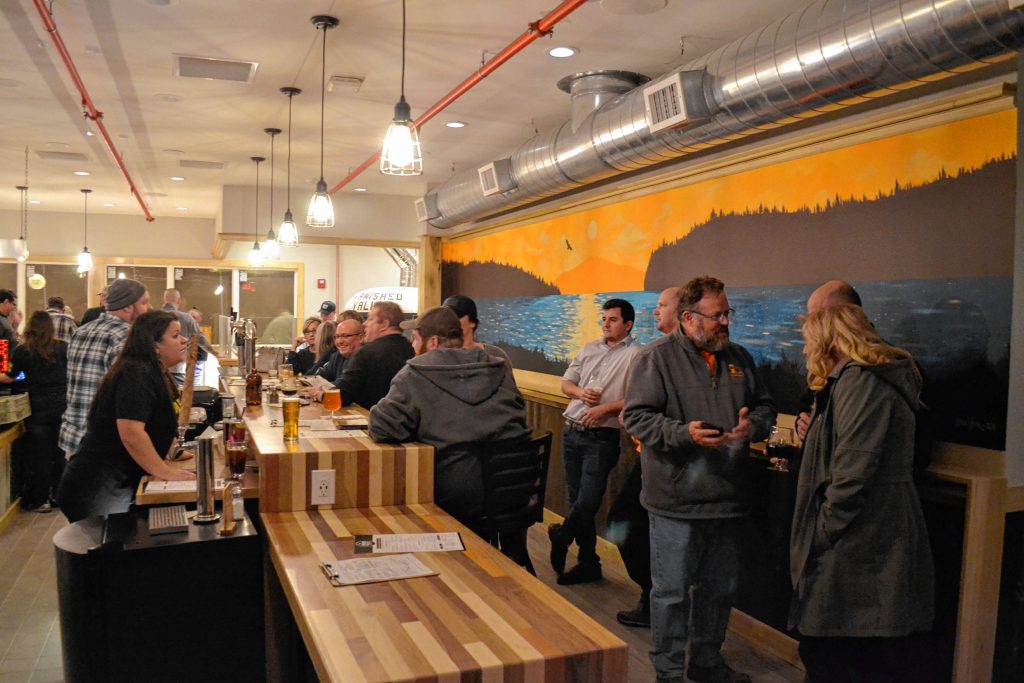 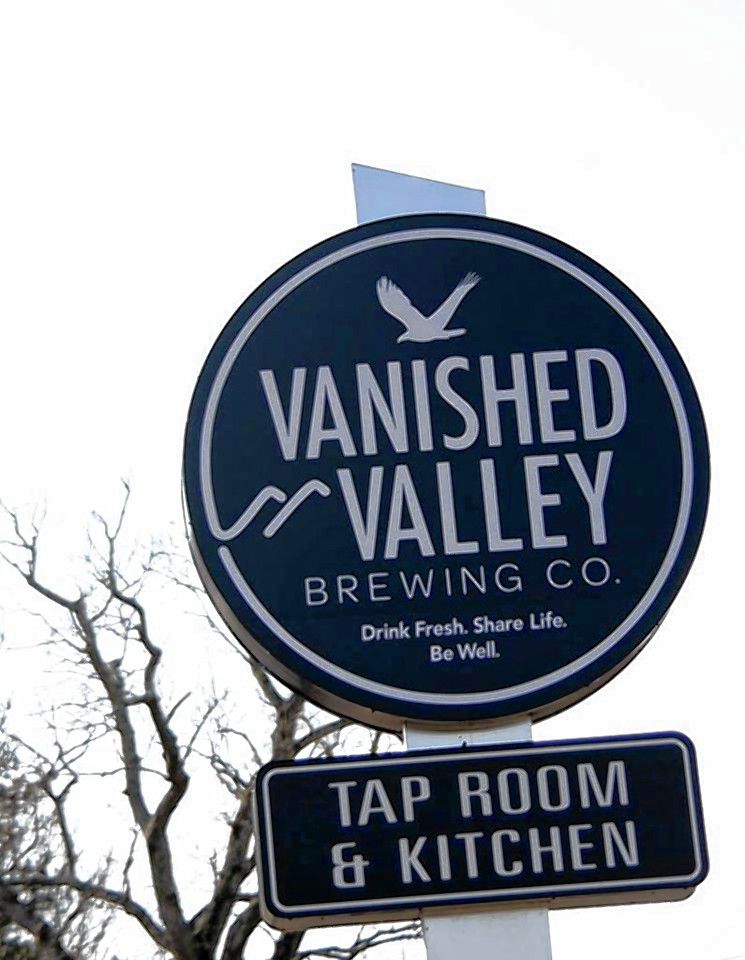 For better or worse, craft beer fans tend to think like tourists, with an eager eye toward the next brewery opening and a fondness for day-long taproom treks. I can understand the excitement, given how quickly the American craft beer map continues to grow. As I noted in my recent chat with the Mass Brew Bros, Massachusetts now has 200 breweries — more than double the number they began tracking five years ago. 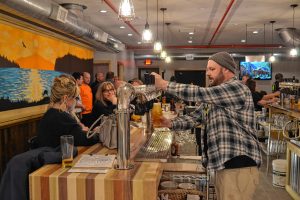 But perhaps even more intriguing are the now-familiar breweries that have evolved substantially since they first opened, either by expanding their level of production or by changing up their business model. Right now, one of the Valley’s most respected new breweries — Vanished Valley Brewing Company in Ludlow — is doing both.

When I first interviewed brewer Josh Britton in the spring of 2017, he was just getting the brewery off the ground with his business partner Mike Rodrigues, who owned Europa Black Rock Bar and Grille on Center Street. Britton’s small brewing shed in Europa’s back parking lot — a 600 square-foot space he referred to as “a garage on steroids” — could fit three 10-barrel fermentation tanks, one 10-barrel brite tank, and that’s about it.

Although beers from Vanished Valley routinely appeared on draft at Europa, and could be found sporadically on tap and in cans throughout the Valley, Britton’s limited facility space and small brewing system prevented the brewery’s supply from meeting a growing demand, especially after a few waves of good press that included a national plug in BeerAdvocate’s 50 Best New Breweries in 2018. 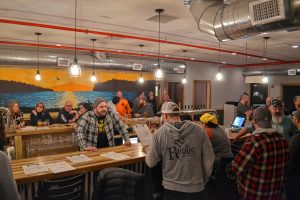 For a time, Vanished Valley scaled up their offerings by contract brewing with Berkshire Brewing Company in South Deerfield, but that arrangement proved temporary. Until recently, it’s been hard to procure much of a personal stash of Vanished Valley in cans. And since Rodrigues’s Europa restaurant closed its doors in October, locals have lacked a taproom where they can reliably enjoy Britton’s beers.

Fortunately, that changes now. A few days ago, I stopped in at Vanished Valley’s Center Street headquarters, where the brewery was throwing a special grand opening party. Since the close of Europa, Britton and Rodrigues have done a full renovation of the building, and Vanished Valley has moved front and center. The sign outside the restaurant now proudly proclaims: “Vanished Valley Brewing Company Tap Room and Kitchen.” Starting this week, it’s open Wednesday to Sunday from noon until 8 p.m.

During my visit, two long bar counters served a good-sized gathering of industry friends, who perused the taproom’s sizable new menu and spread out with their dinners and snacks across the bar seating, standing counters, and tables throughout the small dining area. The kitchen staff working the taproom’s new wood-fired pizza oven, which features the words “Vanished Valley” in handsome black-and-white tile across its front, garnered plenty of attention from peckish onlookers.

The space is clean and comfortable — a welcoming place to stop in for a drink or dinner, thanks in part to an elegant mural on one wall of a bright Quabbin landscape painted by East Longmeadow artist Dean McKeever, who has created beer can designs for Vanished Valley as well as Tree House Brewing, Vitamin Sea Brewing, and Collective Arts Brewing.

Just as impressive is the transformation happening downstairs. In the coming months, the building will also include a secondary, dog-friendly taproom with a separate entrance, which will allow additional tasting space and sales of cans to go. Alongside this will be a 20-barrel brewhouse — visible through a long window in the taproom — that will be able to handle Vanished Valley’s present and future demand. 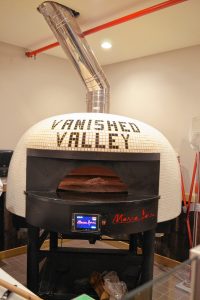 “Our capacity is about to go from 700 barrels a year to over 3,000 barrels a year,” says Britton, who recently signed a statewide distribution deal with Atlantic Beverage Distributors in Holliston. “That means many more cans in stores, and more kegs to restaurants. We can lift the limit we’ve had on can sales on site. And it’ll allow us to fill these draft lines in the taproom. We can have up to 13 or 14 beers on tap here at any given time.”

And the beer? Vanished Valley now, finally, has plenty on tap: New England IPAs like the pineapple-y “Stay Positive and Keep the Faith,” the citrus and tangerine-leaning “Watershed,” and Britton’s flagship first IPA, “Pomona,” as well as a few stouts, a German-style Pilsner called “Clarity,” a pomegranate and blood orange saison called “Gratitude,” and a creamy imperial stout called “Hey, Don’t Forget the Coffee.” 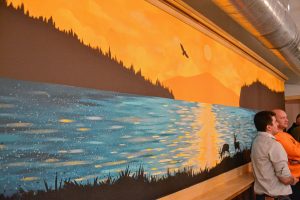 Naturally, that selection will change in the coming weeks. But for a Vanished Valley fan used to furtively scanning taps up and down the Valley, to stop in for pints at the place where it all started is a little dream come true.

Britton says the majority of Europa’s restaurant staff have signed on to work at the new taproom, and have joined forces with Britton’s brewing crew. “We’re still working out some kinks, but overall we’re relieved,” Britton says. “We had a Christmas party, and everyone got to know each other. There’s so much experience among this staff. We’re one big family now.”

Britton says his goal is to provide an above-average experience that you can’t find at a typical brewery. “For us, that meant having a real kitchen that can provide food made fresh with local ingredients,” he says. “A little down the road, we have more plans for this property, like a beer garden. We’re never gonna stop creating and thinking about what we can add to the experience.”

This is all a far cry from Britton’s “garage on steroids” in the back. But he says he’ll keep that shed, and maintain a couple of tanks out there. Perhaps, in time, that space will house some sour beer projects.

Although it’s a room with some sentimental value, Britton — who is 6 feet 5 inches tall — is glad that the new facility’s ceilings are as high as his goals. “I had so many bumps on my head,” he remembers. “I was hitting my head in there at least once a day.”

> Congratulations to Kismet Brewing Company in Westfield, which opened its doors on Saturday morning, February 1 for its first day of can sales. I stopped in and picked up a four-pack of Rich and Liz DeSousa’s “Skylar” Pale Ale and “Press” Raspberry Tart Sour, and greatly enjoyed both. Best wishes with all that comes next.

> Two closings of note: In Williamsburg, the Brewmaster’s Tavern shut its doors on January 20, although its affiliated contract brewing facility will remain open, and is “doing fine,” the building’s co-owner Dennis Bates told the Daily Hampshire Gazette. And in Southwick, Black Rabbit Farm Wild Ales & Provisions, which began releasing beers just last spring, is up for sale. According to Keller Williams Realty, the ten-acre property listing includes a “sustainable farm, brewery, and store, with camping sites” in addition to the house, and the seller is “willing to train on farm maintenance and production through fall of 2020.”

> June will be here before you know it, so although the planning for the fifth annual Western Mass Beer Week is just beginning, The Beerhunter can confirm that the dates will be June 13 to 20 this year. Expect another jam-packed week of beer pairings, tap takeovers, local partnerships, and special collaborations.