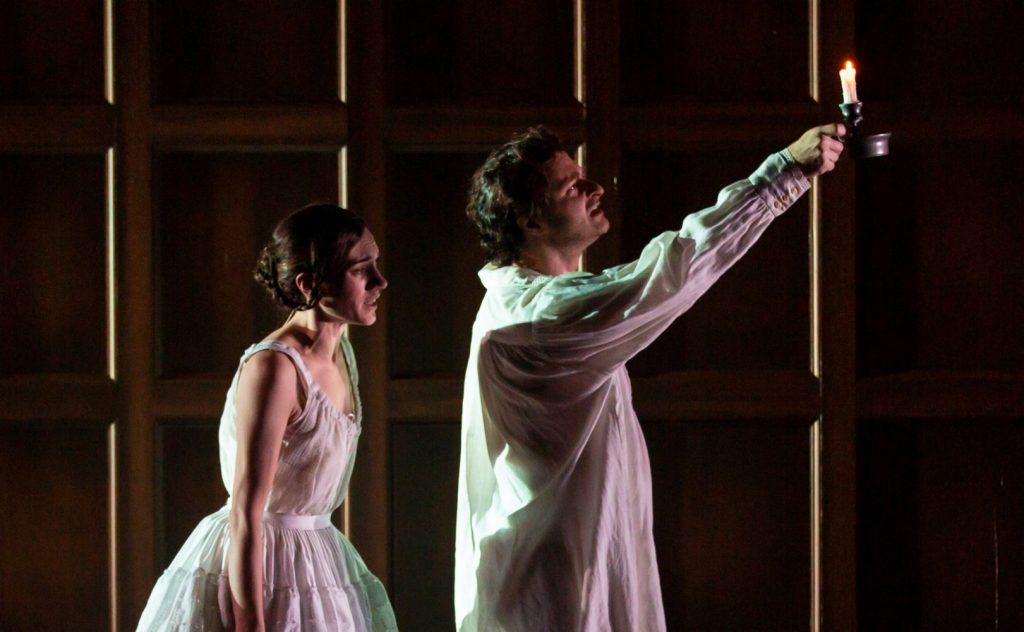 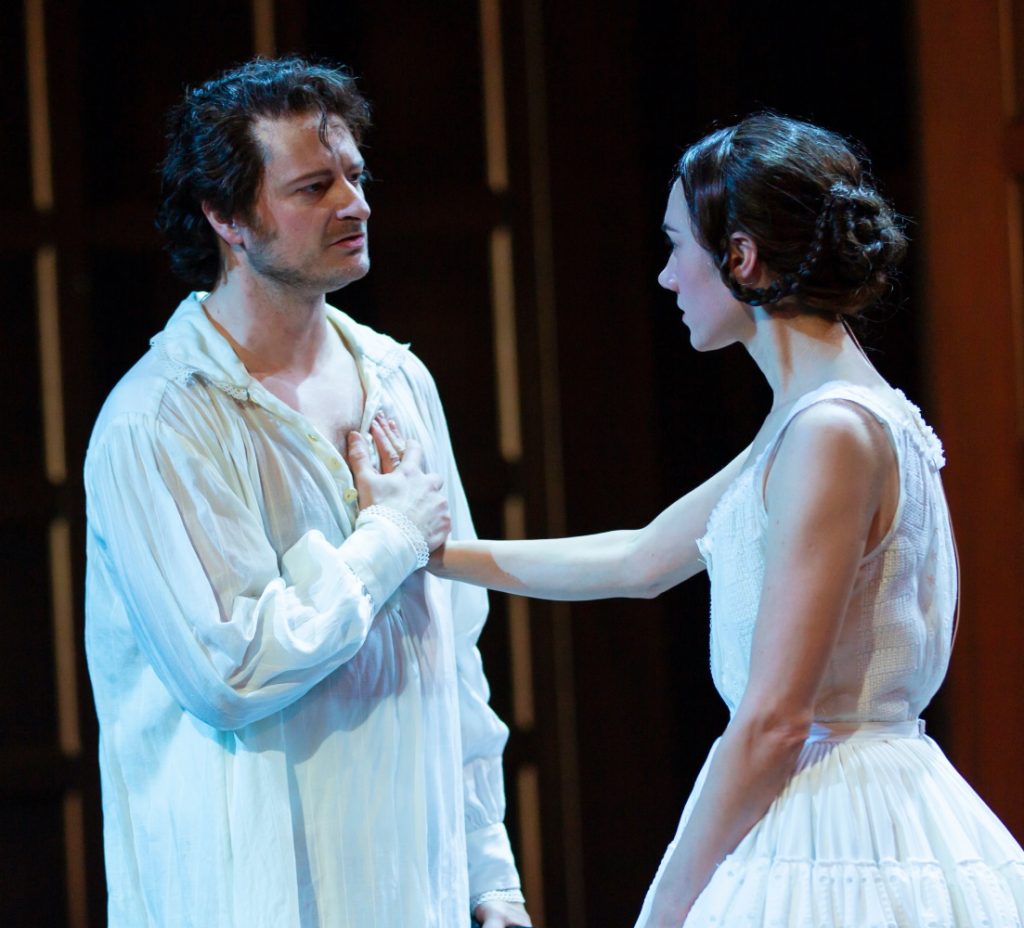 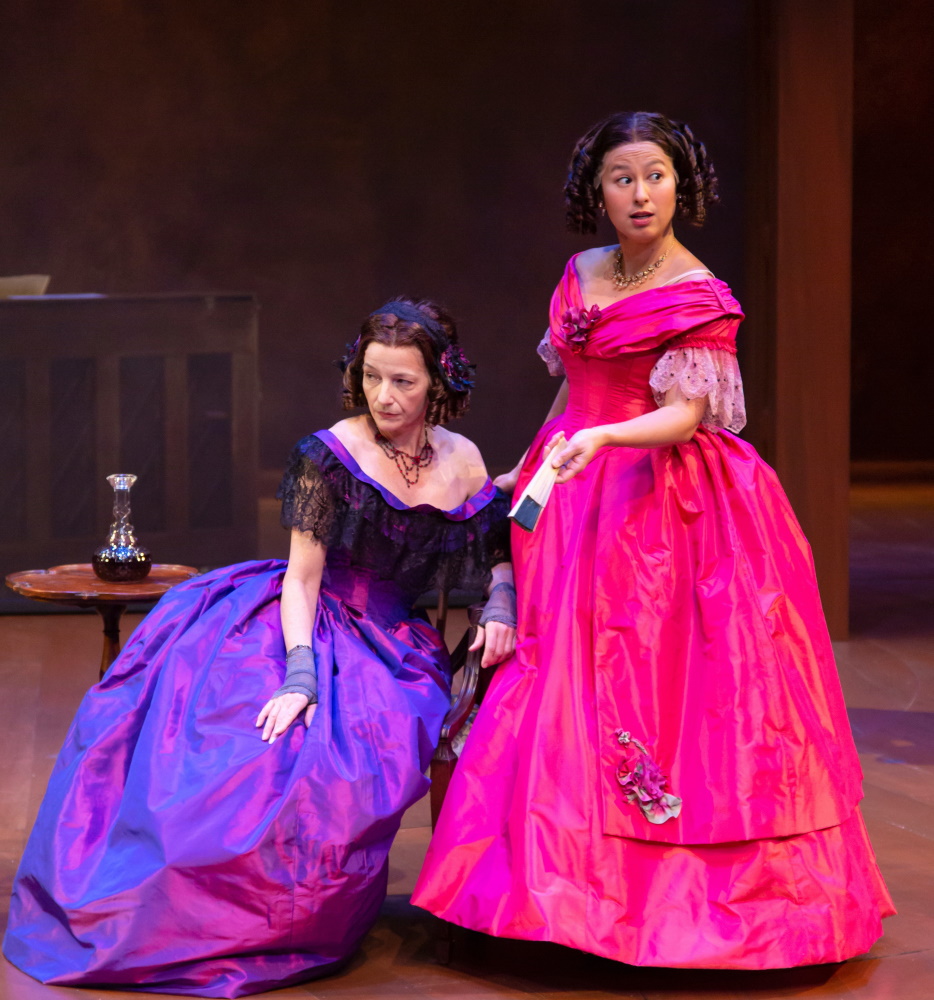 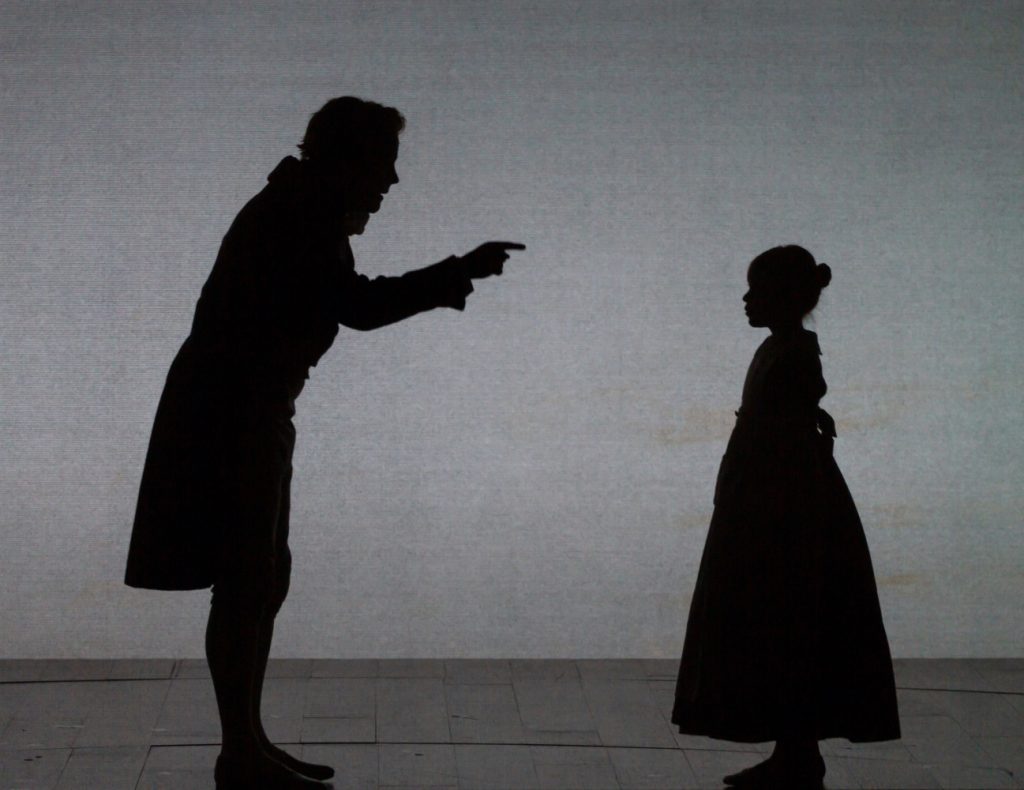 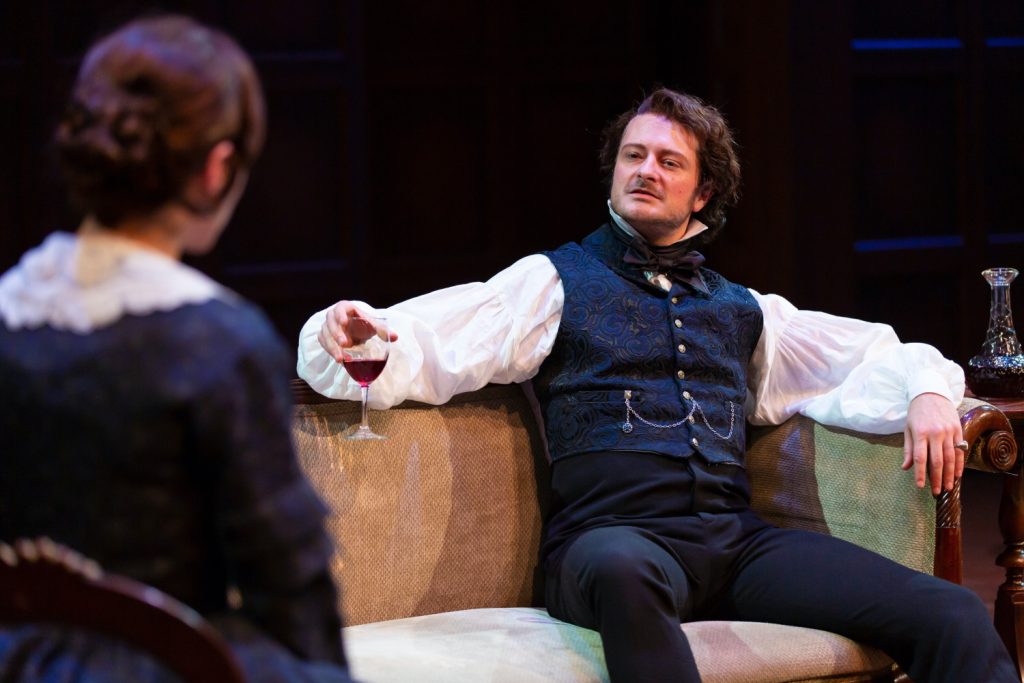 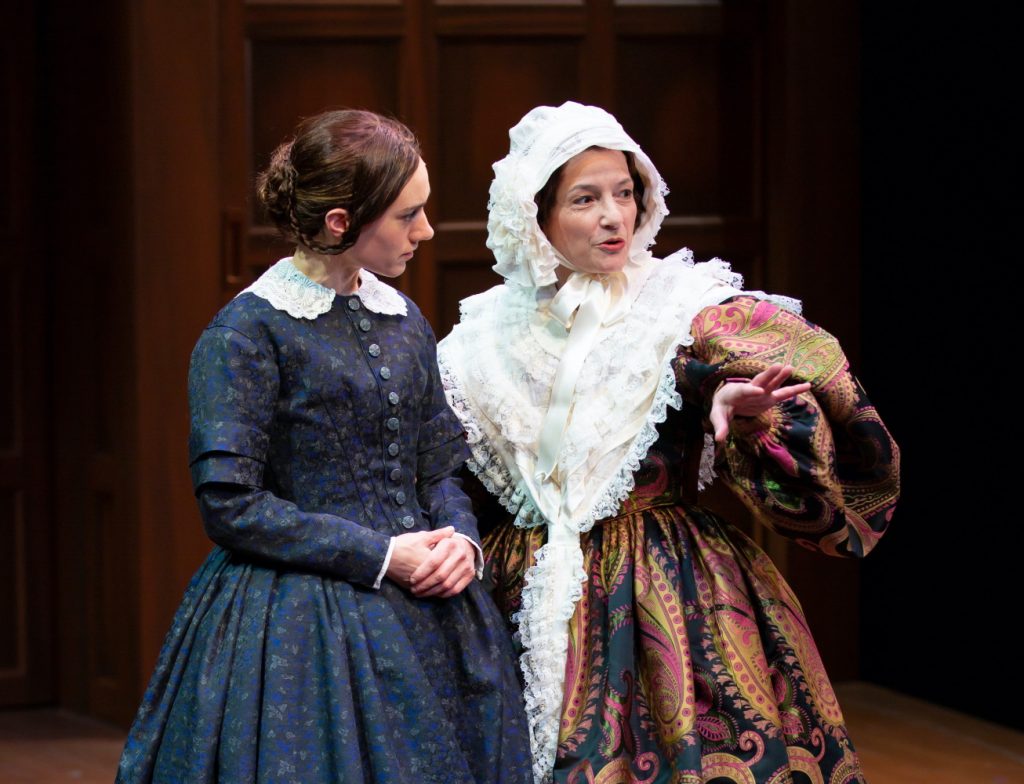 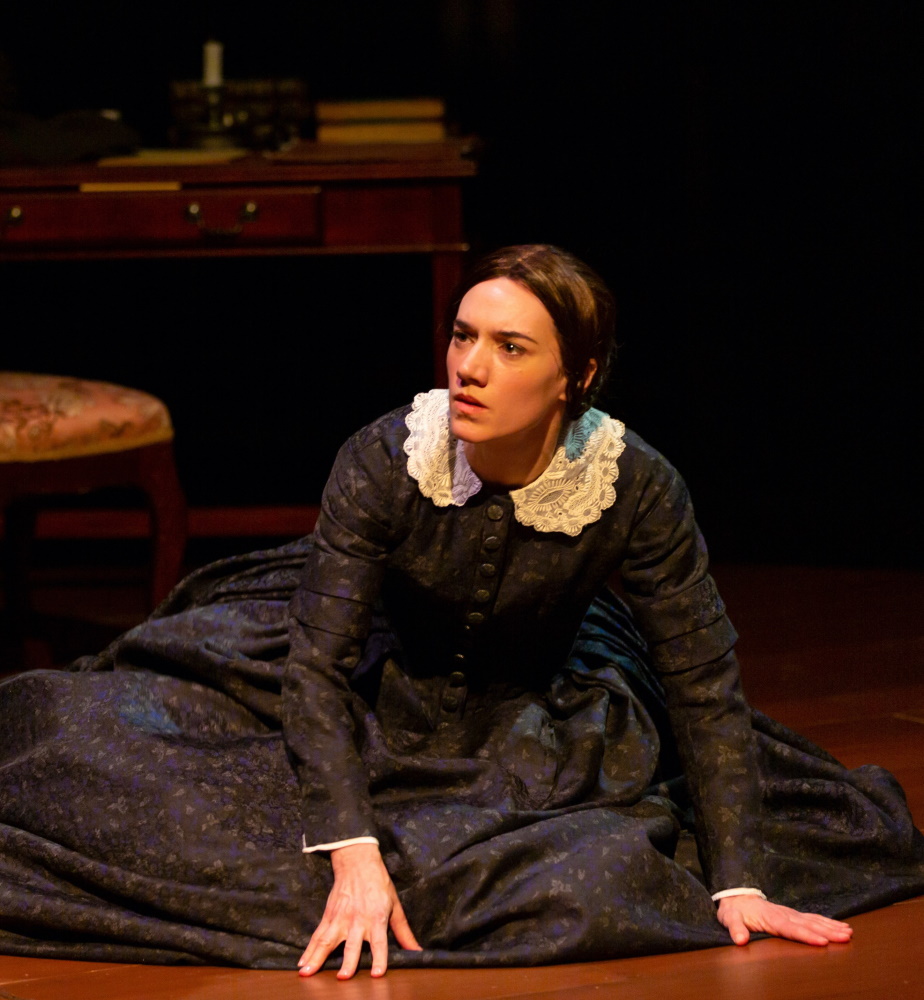 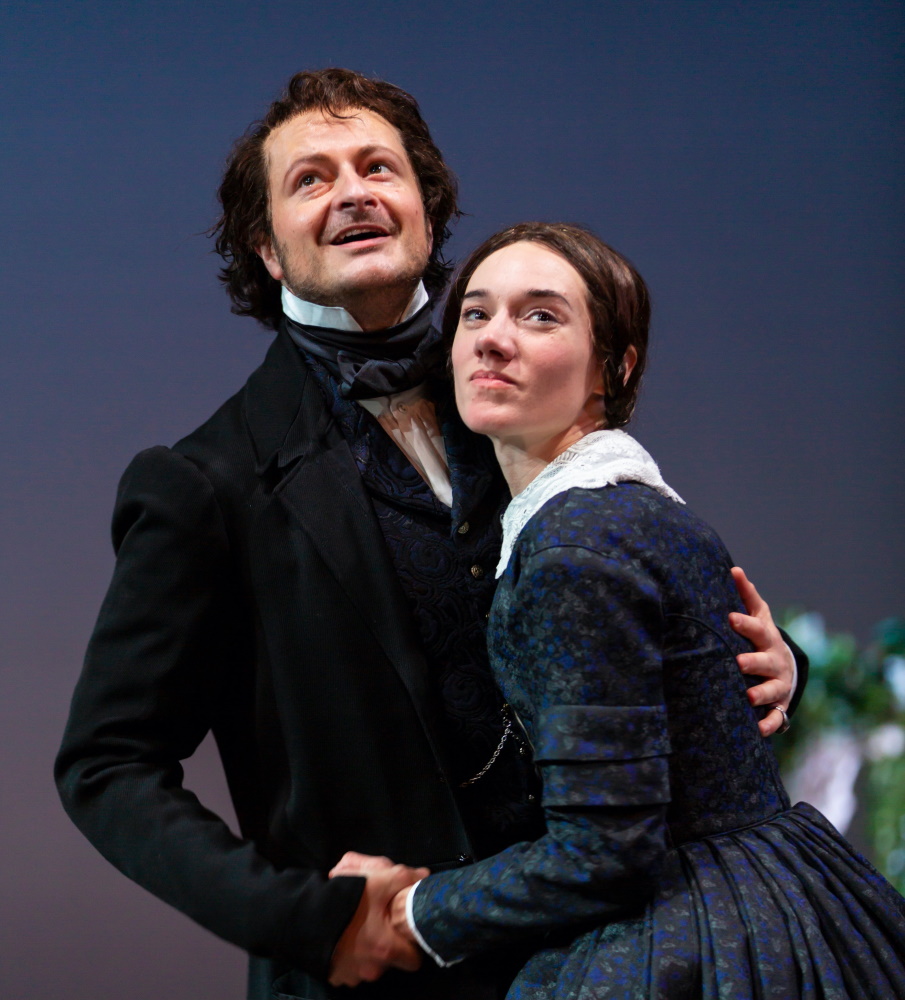 Jane Eyre may be the most-adapted of 19th-century English novels, and that’s saying something, in a field shared with Austen and Dickens. The Wikipedia entry for Charlotte Brontë’s 1847 gothic masterpiece lists over 50 film, radio and TV versions, together with dozens of literary spinoffs and sequels. The stage list there is quite incomplete, though, name-checking mostly musicals, operas and ballets. The only play on the list is a British story-theater-style outing staged at the National Theatre in 2014, which I reviewed here.

Missing as well is another stage treatment I’ve encountered, My Jane, at Chester Theatre Company in 2016. Written by Chester’s artistic director, Daniel Elihu Kramer, it sets a reenactment of key scenes from the novel within the frame of several young women’s recollections of their first enthralling encounter with the plucky heroine.

So my first thought on seeing Jane Eyre in the season lineup at Hartford Stage, where it’s playing through March 14, was Why? Why add another retelling of the tale to a long line of predecessors? 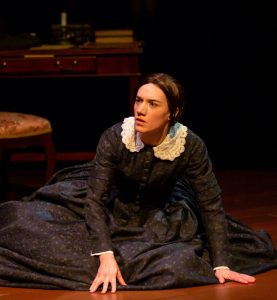 The answer, in this adaptation by Elizabeth Williamson, who also directs, is that it does something the book does and screen versions don’t. Where film and TV can render the Yorkshire moors in vivid color and take us along the shadowy hallways of Thornfield Hall, the viewpoint is objective and the story is told, as it were, in the third person. Brontë’s narrative is in the voice of Jane herself (it’s said to be the first-ever novel to be told in the first person by a female protagonist), and so is Williamson’s play.

Jane, played by Helen Sadler, speaks directly to us, the audience, using Brontë’s term “Dear Reader.” As in most versions, much of the dialogue comes straight out of the book, to which is now added Jane’s own thoughts and commentary.

Thus, we not only witness the cruelties visited on the poor orphan child in the home of her callous aunt and at the brutal Lowood Charity School, we have her opinion of them. This approach serves narrative efficiency as well, moving us briskly from place to place on Nick Vaughn’s spare set, where a writing table and a window seat flank a bare stage, and drawing rooms are represented by furniture that glides in and out on a turntable. Atmosphere is provided by Isabella Byrd’s ghostly lighting, Christian Frederickson’s moody music, and flashbacks seen in stark silhouette. 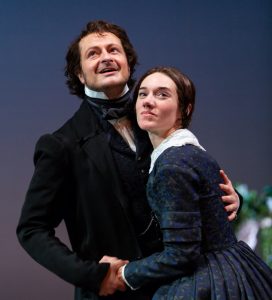 I would have appreciated the first-person device a lot more if Sadler’s approach had been more intimate and inviting. But she seems to think expressing Jane’s ardent spirit and narrative urgency requires excessive volume and overemphasis, more haranguing than confiding. This skews our sympathies for Brontë’s feisty, resilient, outspoken heroine, whose coming of age as a governess in the household of the irascible, secretive Mr. Rochester is both a story of hopeless love finally attained and a tale of mystery and dark secrets, accompanied by midnight shrieks of uncanny laughter.

Chandler Williams’ Rochester makes a refreshing change from the usual brooding Byronic misanthrope. He’s plenty peevish, but also ironic, eccentric, even whimsical, a bit overblown at times but giving the piece its only flashes of spontaneity and humor. 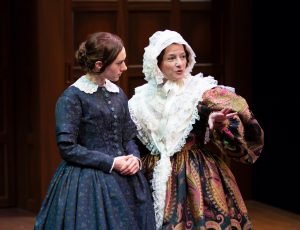 Marie-France Arcilla gives a supercilious flounce to the vacuous Blanche, Rochester’s supposed intended, but her performance of the creepy servant Grace Poole is clichéd and furnished with, of all things, an Irish accent. While Sadler brings her native-born English accent, no one comes close to the Yorkshire cadence of the book’s locale, and most of the supporting cast either approximate BBC English or follow Arcilla into bad attempts at bog-Irish.

At just over two hours, this Jane Eyre provides a handy summary of the beloved book, and there are effective moments in Williamson’s rendition, but this critic was never lured into its spooky spell or tortured passions.