Most of us in this country generate a lot of trash. I spend a lot of time feeling guilty about it, but it turns out that doesn’t actually decrease my trash production. There’s very little incentive for cutting down other than ideology.  With a tiny amount of effort I can recycle all the paper and plenty of the glass and plastic. Even my non-recyclable, non-compostable trash only costs a tiny tipping fee.  The fee is vanishingly low when you consider that the garbage is going to stack up somewhere essentially forever. Republicans worry about leaving debts for our children, but the garbage we leave will be around much longer, it will be a problem for thousands of years to come.

For some though these fees may actually be prohibitive. At least I assume that’s true when I hear of people dumping trash in the meadows or elsewhere. What addled mind would think that it’s OK to just dump your used crap in the woods? I assume it is about perceived cost. If I just put this couch over here by the railroad tracks, it’s gone.

At one level it’s true, that depraved individual hasn’t spent his or her money, but the rest of us are poorer for it as some piece of our world is filled up with junk.

Perhaps that’s what the knucklehead was thinking when he or she (but really probably he) dumped his mattress and bag of garbage off cemetery road in Hadley. This is beautiful agricultural land that has been farmed for at least 350 years and is still kept in small parcels. Tossing a mattress in the middle of the field is just as ignorant but perhaps more inconsiderate than in the woods. Now the farmer has to pay for disposal and drag it off to the dump. Ironically the transfer station for Hadley is only a few hundred yards away. 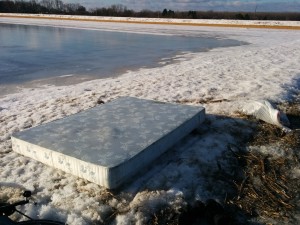 Even when disposed of properly though, the trash winds up in some pile of junk somewhere. It’s hard to drive past the landfill on 91 just north of Hartford and not feel a bit abashed by all that waste. Assuming we haven’t destroyed ourselves by then my grandchildren’s great grandchildren will still see a landfill. Perhaps it’ll have trees on it then.

Humans have been making landfills, or as archaeologists call them middens, for as long as we’ve been around, but mostly they were made of the inedible pieces of food stuffs. The Whaleback midden in Maine is composed of the once abundant oyster shells from the area. At one point it was over a quarter mile long and wide and thirty feet deep and recorded thousands of years of Native American oyster eating.

It’s not as big anymore because much of it was reprocessed into chicken food (from MaineToday.com 2005). On one hand I’m glad they recycled the oyster shells, but on the other hand oyster shells are organic waste and would break down naturally. On the third hand, they midden was an archeological record, so all of that history is gone. I suppose one could make an argument that our enormous landfills are middens for future archeologists. Too bad we can’t make them into chicken food.