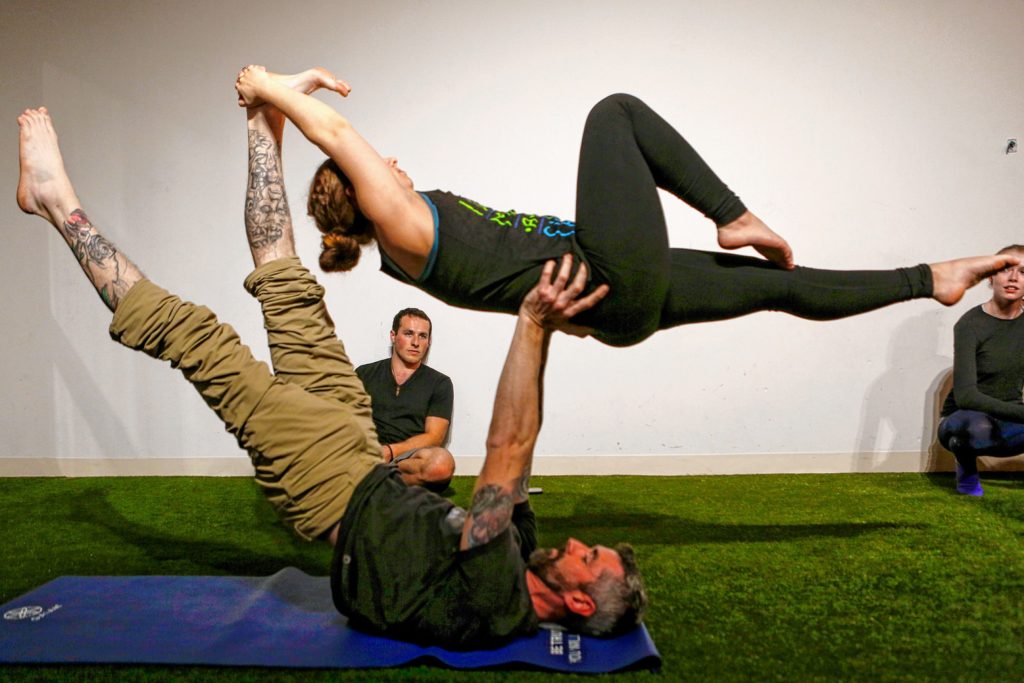 Jason Potash of Northampton, center, watches as Hampshire College student Elizabeth Levick and Brian Begley of Pittsfield perform a counterbalance March 31, 2017 during an acroyoga meet up at Mill 180 Park in Easthampton. 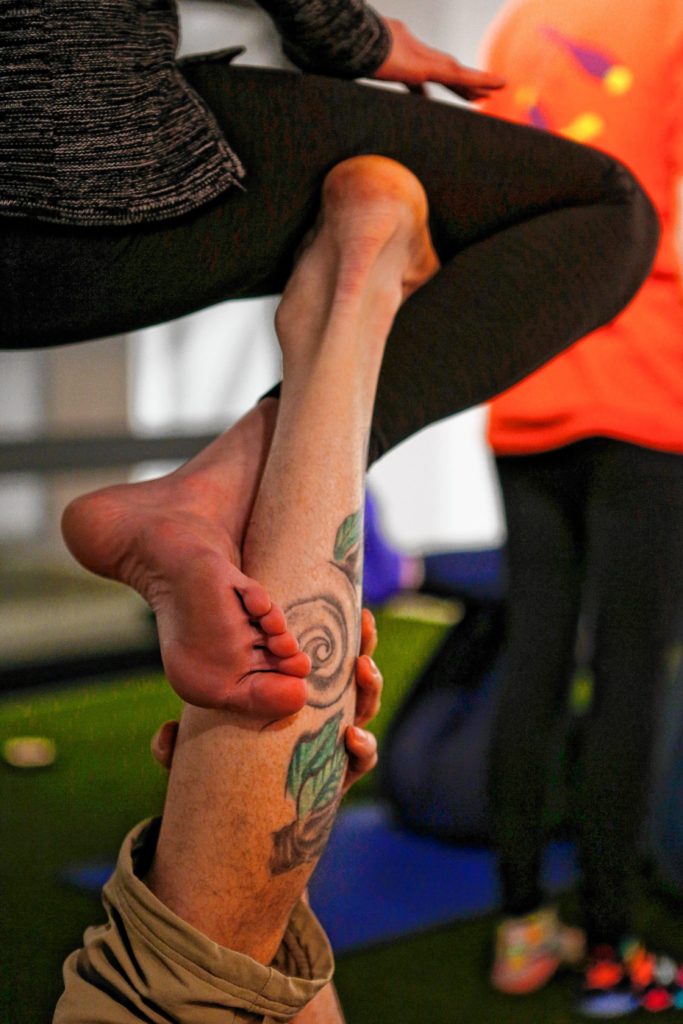 Brian Begley of Pittsfield, left, and Kirsten Jarvis of Easthampton interlock limbs in straddle throne pose March 31, 2017 during an acroyoga meet up at Mill 180 Park in Easthampton. 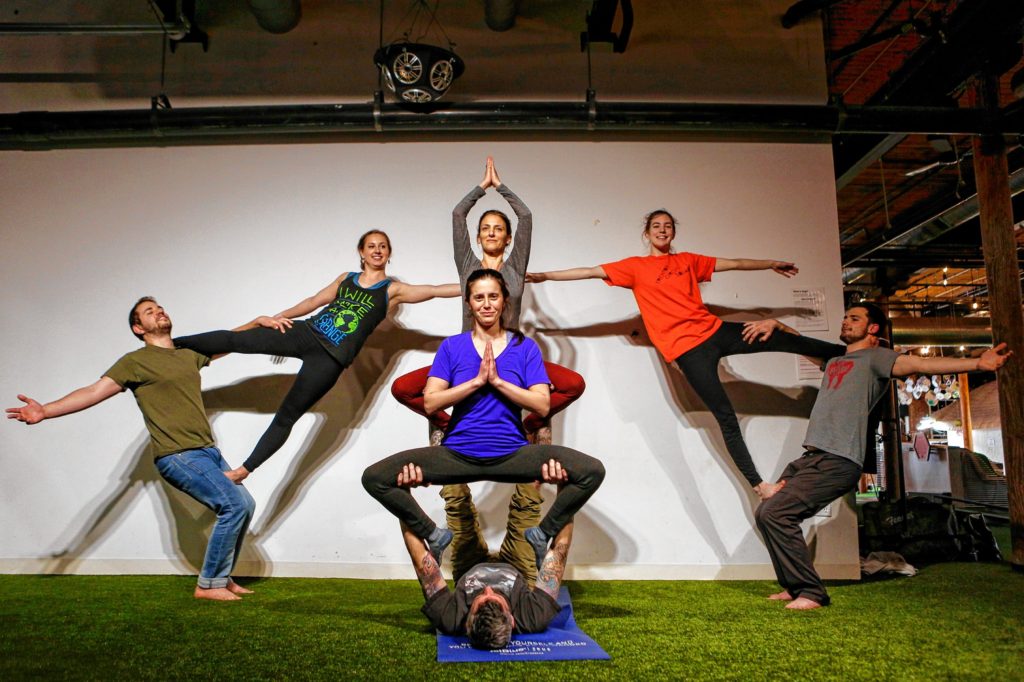 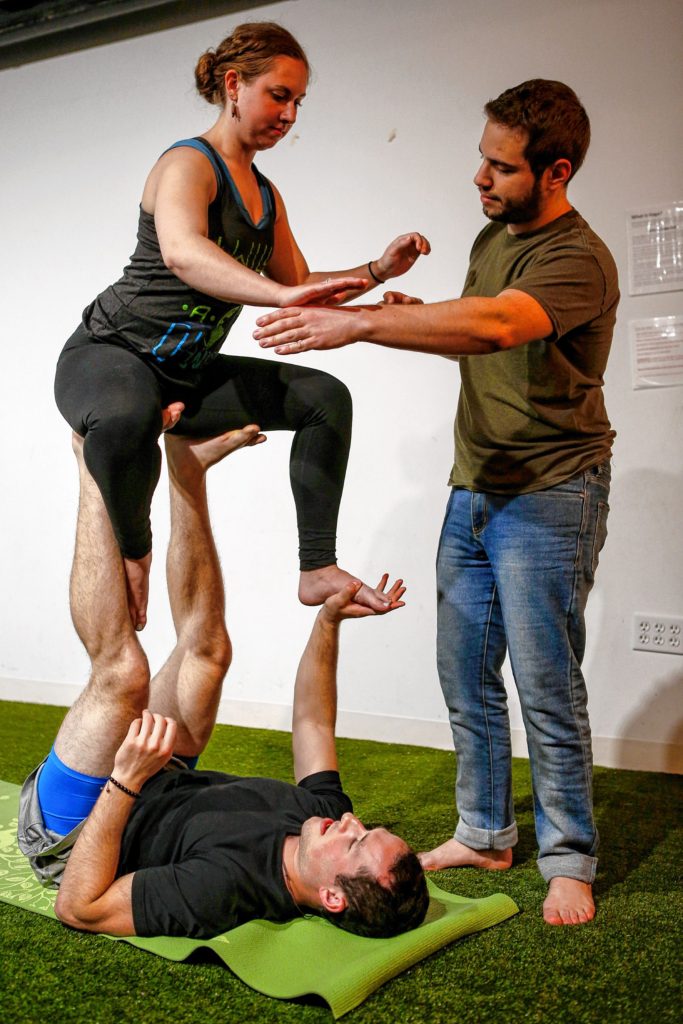 Etai Dvora of Northampton, right, spots as Hampshire College student Elizabeth Levick, top, and Jason Potash of Northampton transition from straddle throne to easy throne March 31, 2017 during an acroyoga meet up at Mill 180 Park in Easthampton. 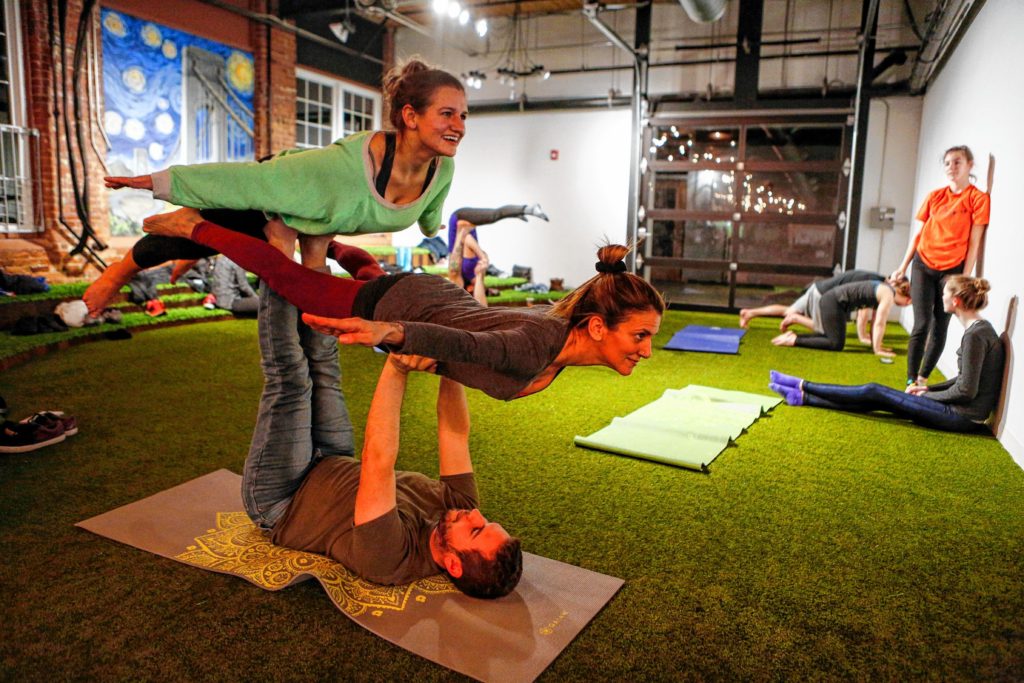 Etai Dvora of Northampton, bottom, holds up Dorin Ben-Ami of Northampton, center, and Gazette journalist Amanda Drane to perform double bird pose March 31, 2017 during an acroyoga meet up at Mill 180 Park in Easthampton. 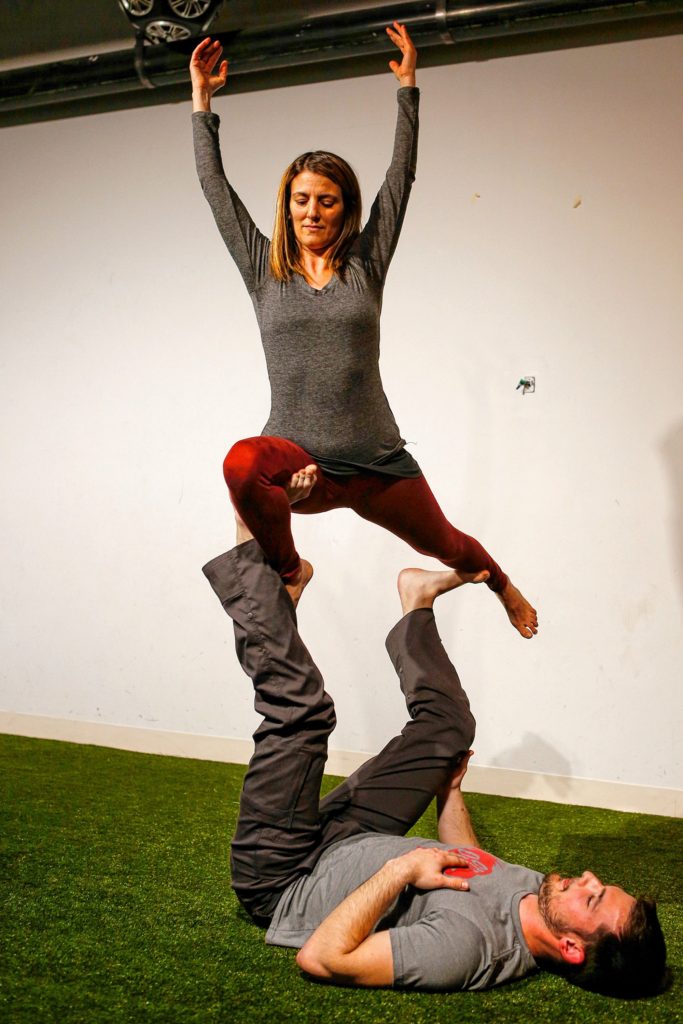 Dorin Ben-Ami of Northampton, top, and Will Witecki of Newington, Conn., perform a straddle throne variation March 31, 2017 during an acroyoga meet up at Mill 180 Park in Easthampton. 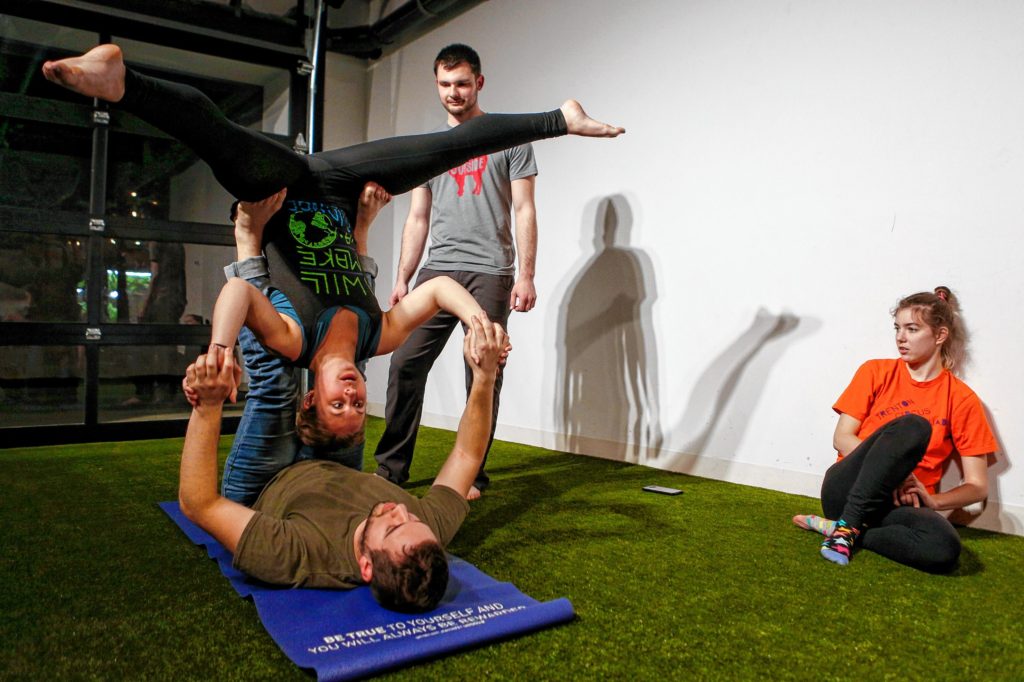 My shoulders and arms stretched backward like wings, I couldn’t help feeling like Rose from Titanic, and a grin spread across my face as I said: “I’m flying!”

On a recent Friday I gave acroyoga a shot and it was the most fun I’ve had in while. Live music played beside the acroyoga group of about 10 people at Mill 180 Park in Easthampton, joined by a Facebook group and a Meetup page.

The phenomenon is taking hold internationally with classes and giant acroyoga “jams” in larger metro areas, but here it’s a small group casually playing around, putting partnered yoga poses up into the air and rolling around on the astro turf.

Loyal members of this group, which also meets regularly in Northampton, say they found acroyoga in different ways. Brian Begley of Pittsfield says he got into it about a year ago “because a girl I met on Tinder was into it.” The romantic relationship didn’t stick, but the acroyoga did.

Then, he taught me how to fly. He laid down, face up and the fake grass crunched as he did. He lifted his feet into the air, making like two pillars. I leaned up against his upward-facing feet with my midsection and his toes wiggled in search of the proper placement along my hip bones. Finding the right spot, he reached out for my hands. Nervous — and my hands already starting to sweat — I lurched forward.

I felt giddy. I laughed and then the pose buckled some. “Tight is light,” Begley told me. I flexed my arm muscles and tightened my grip on our interlaced hands. I flexed the muscles in my legs and put on my warrior gaze. In order to stay balanced in the pose, you’re working what feels like every muscle in the body.

My first soiree into acroyoga didn’t include any oms or sevasanas, but I certainly felt the same high walking out the door as I do following a regular yoga experience. In fact, it was intensified. Each time I went up in the air, using my body and the leverage of another’s to balance, it was a surge of adrenaline and what one acroyoga teacher referred to as “happy hormones.”

It’s hard to say what accounted for the post-acroyoga high. Was it the fact that for two hours I was entirely focused in the present moment? Was it the human contact and building of trust? Was it all the handstands I did with another person’s hands serving as the ground? Practiced aroyogis would say all of the above.

Johanna Wise is a Berkshires-based yoga and acroyoga teacher who wasn’t at the session at Mill 180 Park, but teaches leaders of the group that calls itself Acroyoga Northampton. She lived in California around the time acroyoga got off the ground, and then one of those founders, Jason Nemer, helped train her.

Nemer and Jenny Sauer-Klein met at a party.

“He was an acrobat and she was a yoga teacher,” Wise says of their chance encounter in the early 2000s. “They stayed up all night and acroyoga was born.”

Nemer and Sauer-Klein founded AcroYoga.org, which helped popularize and standardize the practice.

Wise says yoga is about moving mindfully, and acroyoga is based on the same premise. In fact, some say the external stimulation a partner provides helps them be more in the moment. Acroyoga also incorporates more of a playful side of yoga, fostering “joy and connection.”

“It’s been extrapolated that acroyoga is the highest form of union,” she says, though “the yogic part of it can be lost sometimes.” In her teaching, she helps students incorporate breath, flow and spirituality into the partnered postures. The spiritual side of acroyoga is sometimes overshadowed for the same reasons it’s overshadowed in all yoga classes — ego. It’s natural, but it’s also important to let go. 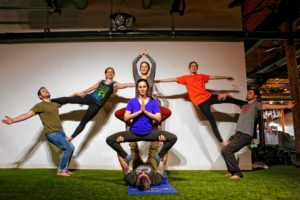 “In a lot of ways, they’re the same,” Wise says of the two yogic forms. In traditional yoga, she says, “we’re practicing noticing what’s happening internally.”

“You have a partner that pushes you a little bit,” says Dorin Ben-Ami, of Northampton, a former gymnast who recently joined the Northampton-based group.

And, she says, it’s just plain fun. “It’s like being a kid again,” she says, smiling.

Etai Dvora of Northampton, organizer of the group, says the practice is also a huge confidence builder. He says the poses look more intricate than they are.

“Then through practice I’m able to do them. It sets off a self-improvement high.”

Dvora says he takes sporadic acroyoga classes when and where he can. The group more often finds new poses to try by following international acroyoga pages on Instagram and Twitter.

“My main issue with that, sometimes, is it’s hard to gauge how difficult a pose is just by looking at it on Instagram,” he says.

Once you get beyond the basics, he demonstrates how poses string together into “washing machines,” the asanas of acroyoga. These take on a dance-like quality.

“The challenge,” he says, “is being able to transition from pose to pose smoothly.”

Northampton Acroyoga meets at Mill 180 Park in Easthampton every Friday from 6 p.m. to 8:30 p.m., and Wednesdays at 6 p.m. at Childs Park in Northampton, weather permitting. Join the Facebook group for information on upcoming meetups.