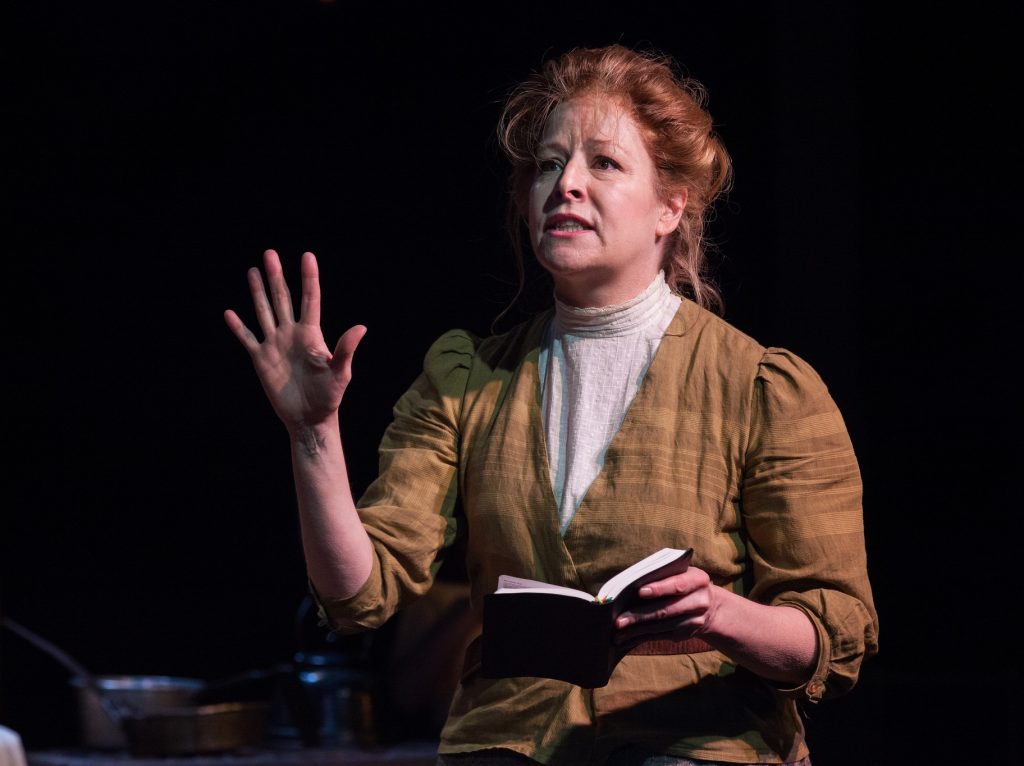 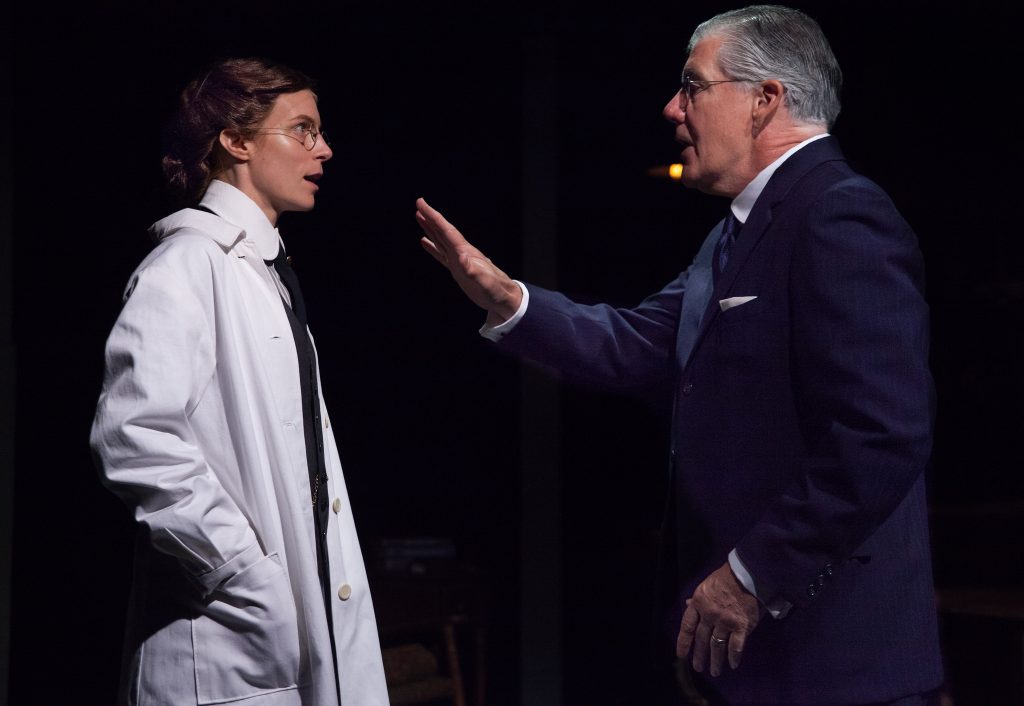 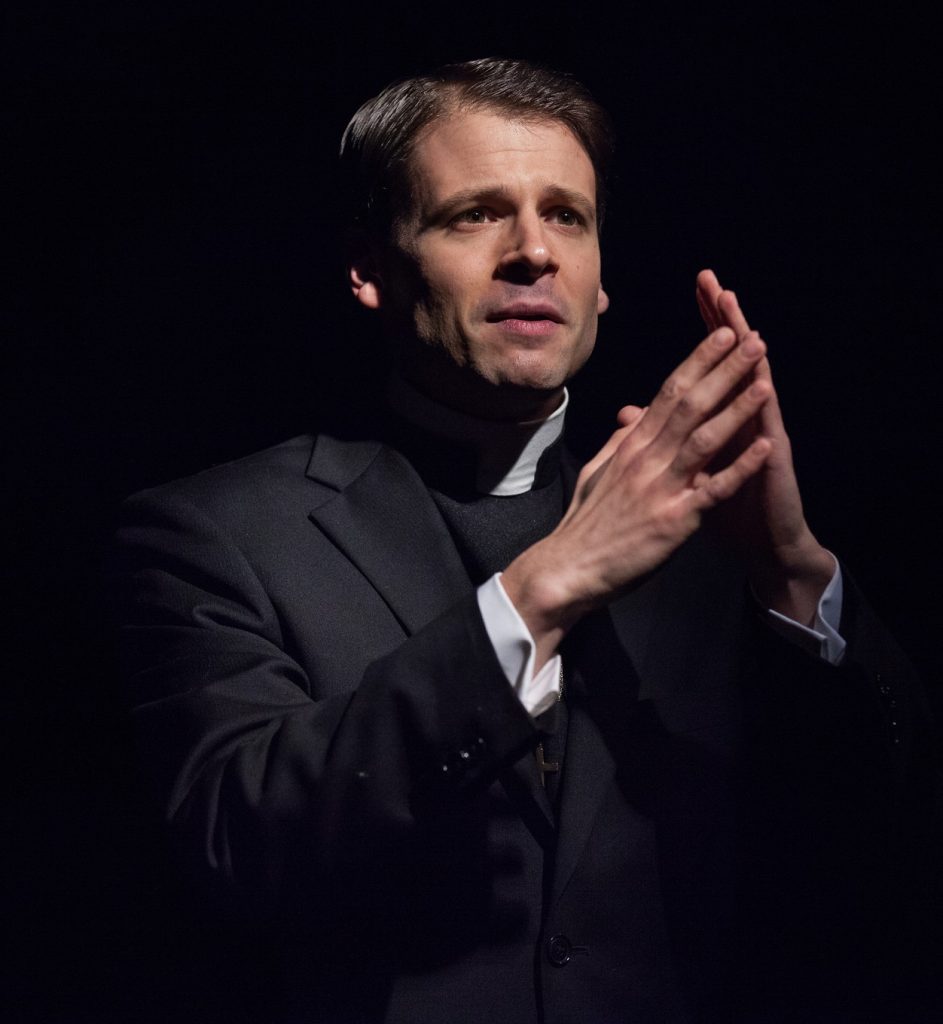 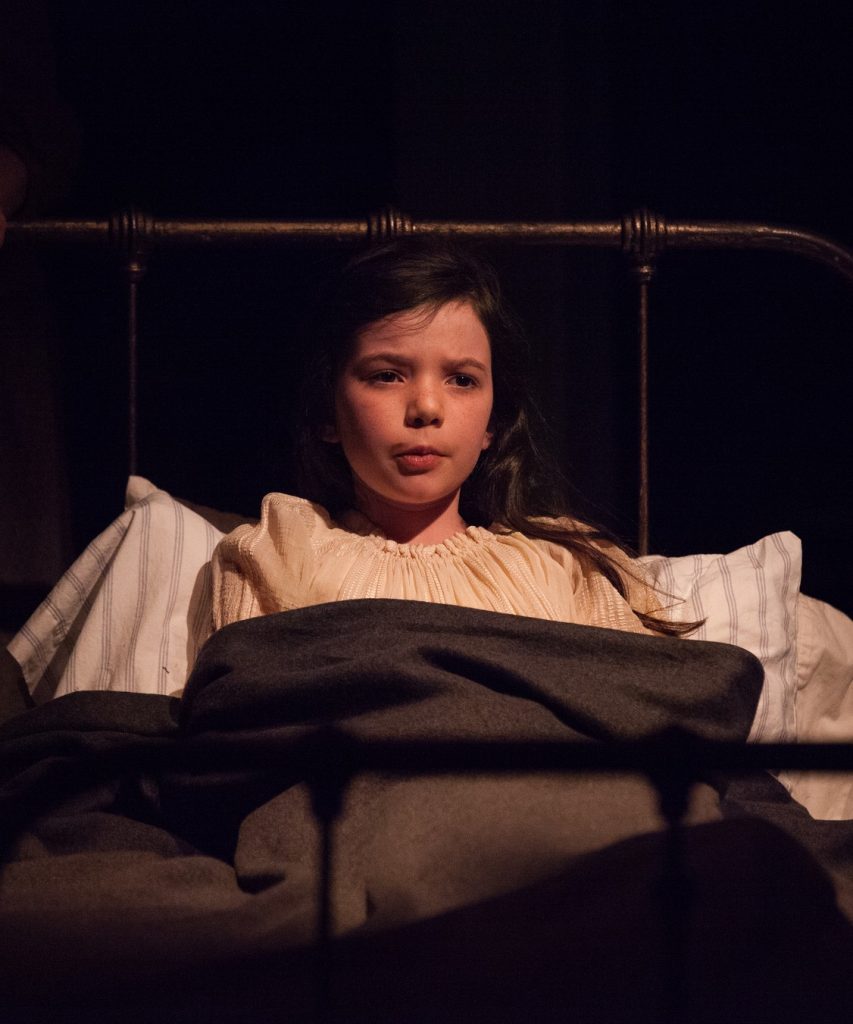 Barrington Stage Company’s summer season launched on Sunday in the troupe’s St. Germain Stage, with a play by its eponym, Mark St. Germain. In her curtain speech, artistic director Julianne Boyd proudly announced that Typhoid Mary is the ninth play of his that Barrington has produced (I make it 10, but who’s counting?). She also told us it’s a play that “has to be done now,” adding, “You’ll see why.”

Mary Mallon earned her grisly nickname because she was an “asymptomatic carrier” of typhoid fever – she carried the germs but was immune to the disease, which is spread by ingesting contaminated substances, like food. Mary was a cook. Her laissez-faire approach to hygiene infected a series of families she worked for, until she was finally identified as the source and quarantined at Riverside Hospital in New York.

This is where Typhoid Mary takes place, mostly in the cottage she occupied on the grounds, essentially in solitary confinement. Brian Prather’s set, true to the playwright’s instruction, gives “the impression of an island amid the empty darkness of the surrounding stage,” and Scott Pinkney’s lighting effectively parts that darkness for moments of direct address to the audience. The period costumes are by Elivia Bovenzi. 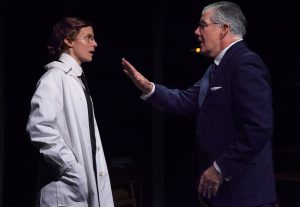 It’s 1909, the third year of Mary’s incarceration, and bureaucratic pressures are building to release her, against one doctor’s protests. That doctor is Ann Saltzer, the hospital’s first female physician, played with a prickly poise by Keri Safran.

The two women are immediately at loggerheads. At one point Mary observes, “I think we despise each other. Am I wrong?” When Dr. Saltzer confirms it, Mary replies, “It’s good to know where you stand with a person. Saves so much time.”

That is St. Germain’s Mary in a nutshell – shamelessly candid, using her caustic wit as a weapon, to jab and deflect. But beneath that shell she’s angry and frustrated, unwilling or even unable to recognize that she’s responsible for the infections. She’s not sick, so how could she sicken others? She meant no harm, so can’t believe she’s done any. In other words, she’s deep in denial.

And this, I’m sure, is what Boyd meant about the play’s contemporary relevance. Mary calls the epidemiological evidence “vicious, dirty lies.” When Dr. Saltzer protests, “This is science – you can’t deny science,” she responds, “Who needs science when I know the truth?”

St. Germain’s plays are often built around clashes of ideas and beliefs. Freud’s Last Case was a theological debate between the Jewish atheist and the Christian convert C.S. Lewis; Best of Enemies brought a black civil-rights activist face-to-face with a Klansman. In Typhoid Mary it’s science vs. willful ignorance. 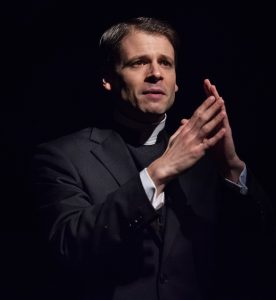 Mary’s obstinacy butts up against two well-meaning men’s attempts at intervention. Kevin O’Rourke nicely captures the dilemma of the hospital’s administrator, caught between medical and organizational imperatives. As Father McKuen, a sweet, earnest young priest, Miles G. Jackson embodies another of the play’s oppositions between faith and reason. Under Mary’s irreverent questioning (and thorough knowledge of scripture) his seminary certitude wavers – the counter-example to Mary: a mind and heart that is susceptible to change.

In this sense, the play is a bit schematic. The characters around Mary are engaging, enlivened by St. Germain’s adroit gift for dialogue and Matthew Penn’s sure-handed direction, but they represent points of view, foils for her truculent intransigence, more than fully drawn individuals. In contrast is eight-year-old Sarah (a delightful Frances Evans), one of Mary’s unintentional victims, seen in rueful flashback  – not so much a point of view as a point of reference.

The problem with Typhoid Mary’s story, in dramatic terms, is that she never accepted her responsibility for infecting, in the end, more than 50 people. In his script, St. Germain makes a gesture toward understanding, but since he also hews pretty closely to her actual biography, it doesn’t go anywhere.

The heart and soul of the show is Tasha Lawrence in the title role. She gives the woman’s scalding wit and threadbare pride a throbbing undertone – a sense that if she let go her tight-held certainty, everything would shatter. There’s a touch of the Irish still in her voice, and more than a touch of the immigrant’s do-or-die determination in her manner. Riveting and heartbreaking, it’s the season’s first must-see performance.