In bid for seventh term, Mass. Secretary of State William Galvin clarifies his history of support for same-day and automatic voting 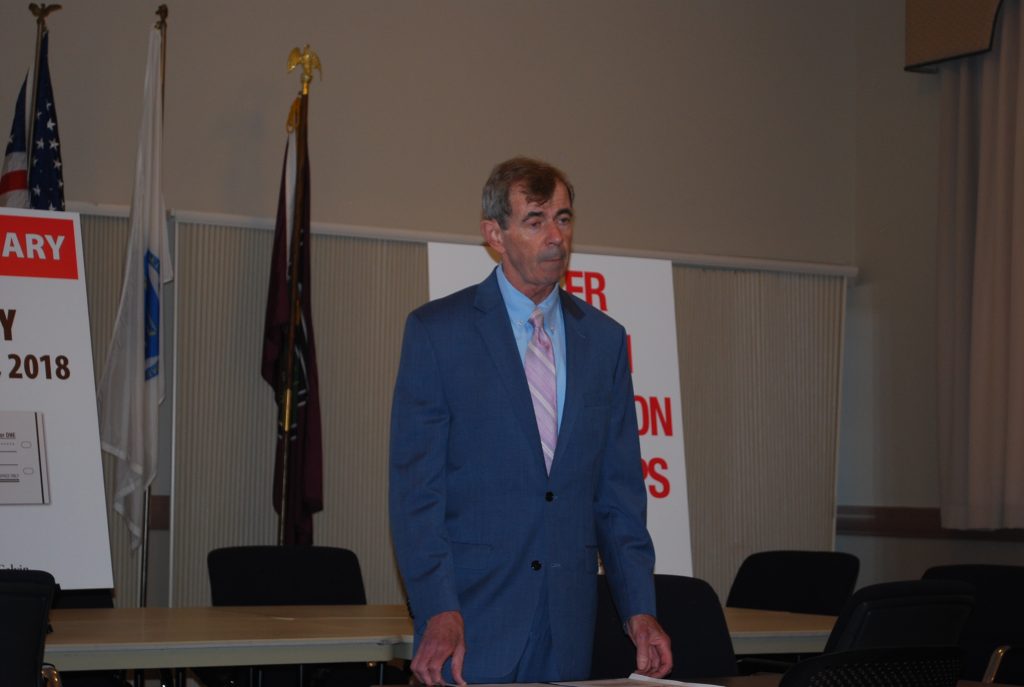 Massachusetts Secretary of State William Galvin, who is running for his seventh term in office after serving in the position for more than two decades, is facing a challenge from Boston City Councilor and Democratic opponent Josh Zakim, pushed back on the notion that he has been slow to embrace expansive voting policies such as same-day registration and automatic voter registration during a visit to Amherst on Thursday, June 21.

Galvin filed a bill this year in January supporting same-day voter registration. Zakim entered the race in November 2017. Critics have said Galvin hasn’t been vocal about his support for same-day registration until Zakim announced his candidacy on a platform including policies aimed to boost voter turnout. However, Galvin disputed that criticism.

He said he was supportive of the idea behind a bill filed by state Sen. James Eldridge (D-Acton) several years ago, which included same-day registration. He said his support for Eldridge’s bill was contingent on locating funding mechanisms to compensate municipalities, so the cost of same-day registration doesn’t fall on each community.

Galvin filed a bill early this year in January. Zakim entered the race in November 2017 on a platform of increasing access to voting.

“You have to have some accuracy to know that the ballots are counted, so you need a list,” he said. “Same-day would solve the problem, and I think it would do it in an efficient way because it would combine the act of registering and voting in a single act. What I proposed on same day, and which is pending before the Legislature, is that you provide connectivity with every polling place.”

Galvin said there would need to be at least two laptops at every polling station across the state to accommodate the same day voting registration process, and that funding for those could be covered through federal funding. However, the cost of hiring two additional people at every polling station in the state would need to come from an appropriation from the legislature.

“The legislature is very difficult to get through to when it comes to election laws,” he said, adding that he doesn’t have the sole power to change election laws, which would need to happen in order for same-day voting to be approved.

Galvin was in Amherst on Thursday, June 21, for a voter information session in which he discussed the upcoming Sept. 4 primary as well as the race for former Sen. Stan Rosenberg’s seat. The only candidate on the ballot is Democratic candidate Chelsea Kline, but numerous write-in challengers have made the race highly contested.

Zakim, at an event in Northampton earlier in the week, claimed Galvin — through an appeal of court case Chelsea Collaborative v. Galvin — was trying to maintain a 20-day period before Election Day in which voters could not register. Massachusetts’ Suffolk Superior Court decided the 20-day period was unconstitutional in July 2017.

Galvin said he appealed the decision because he doesn’t think administrative rules should be in the state constitution.

“The issue before the court is not about the [20-day registration period], it’s about the process; that is – Do you have to have it in the state constitution or is the legislature allowed to make it by statute?” he said.

As an example, he said the polls across the state close at 8 p.m. That rule is not enshrined within the state’s constitution it’s an administrative rule.

“If we have to have every administrative rule in the constitution, maybe we’d have to keep the polls open to midnight,” he said. “We think the issue is – what’s the right of the legislature to make reasonable rules?”

He said he’s also an advocate for automatic registration, which he thinks could be done through the Registry of Motor Vehicles or MassHealth. Galvin said he helped advance a bill that now deceased State Rep. Peter Kocot (D-Northampton) filed prior to his death in February. The bill would authorize the automatic voter registration program and had been stuck in limbo in the clerk’s office before Galvin helped advance it.

Galvin said he thinks automatic registration has a lot of momentum to be approved at the state level.

As for the integrity of the state’s voting system, Galvin said Massachusetts didn’t encounter the same problems other states had in regards to hacking during the 2016 election because Massachusetts does not allow electronic voting.

“We were officially informed by Homeland Security that we were not the subject of hacking,” Galvin said. “I believe that one of the reasons is that we’re not on the internet. We’re very jealous in our guarding of voter registration information. We don’t even share it with other government agencies within the state because of the personal information that’s there … I think it speaks to the quality of our election administration.”

At the same time, he believes a Trump administration 2020 U.S. census decision could negatively affect Massachusetts’ voting potential. He said the administration’s attempt to include a question on the 2020 U.S. census about whether a person is a U.S. citizen undermines the census. He said there are about 500,000 documented non citizens in the state and about 500,000 undocumented immigrants living in Massachusetts.

“There’s a great threat to the accuracy of our count by inserting that question, which would mislead people. It’s an effort to sabotage the census. The Attorney General has brought a lawsuit forward with other states. We’re hoping to win that.”

He said the 2020 Census could prove especially important to western Massachusetts – the region could lose a member of congress if the census shows a drop in population for the state.

Galvin did not secure the recent Democratic nomination, which instead went to Zakim. Other challengers in the race include Green Party candidate Juan Sanchez and Republican candidate Anthony Amore.

When asked about his thoughts regarding losing the Democratic nomination, he said that he’s failed to receive nominations in past elections, but despite that was reelected.

“Two previous times I was not the endorsed candidate,” Galvin said. “In both instances I won the primary … As I said that day, I would have preferred to have won, but it’s up to the voters and that’s the way it goes.”

“They didn’t get paid for the time they took and I think the matter was satisfactorily resolved,” Galvin said. “We certainly weren’t trying to do that. I think they should have done it on their own time, which they had the right to do and they didn’t do. So, I think the matter has been resolved and that’s the end of it.”