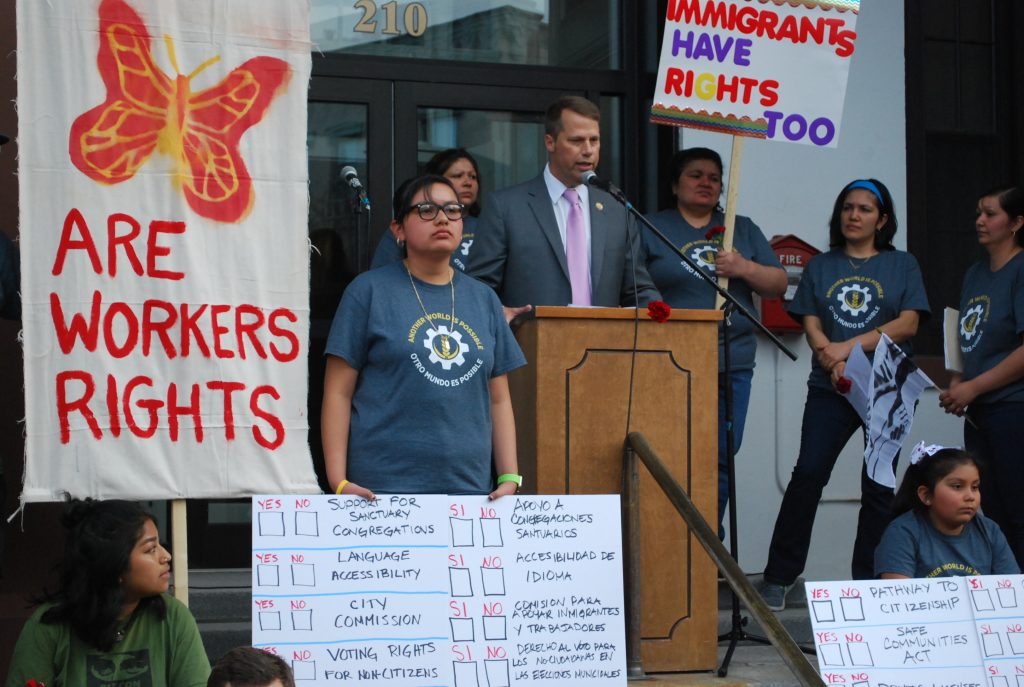 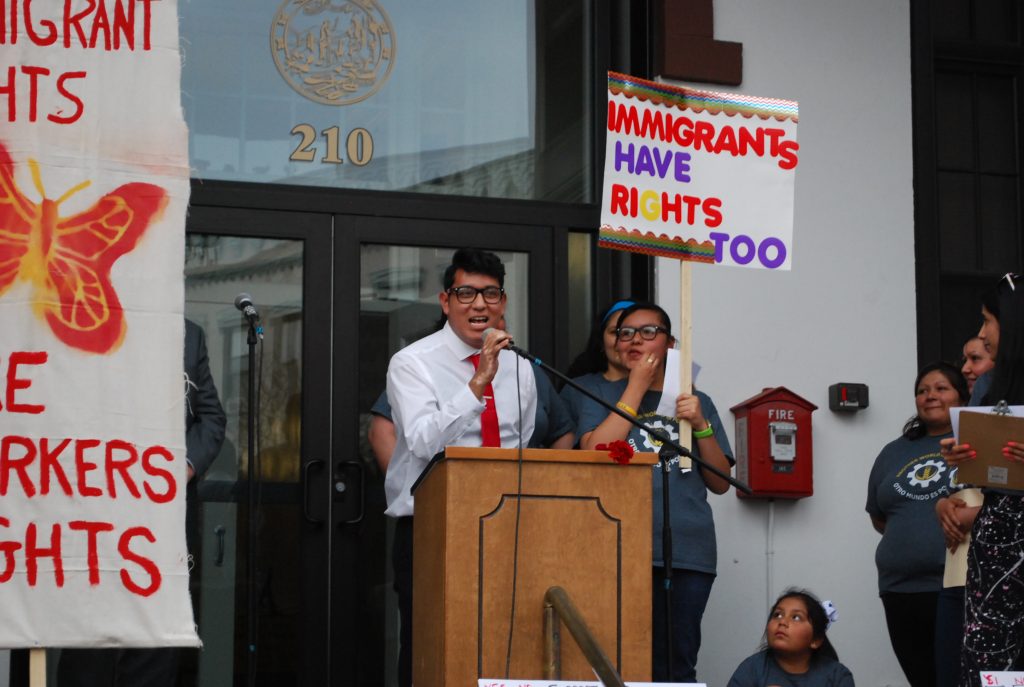 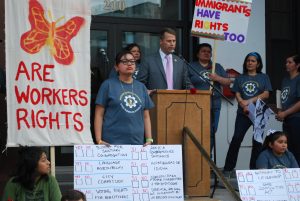 Northampton Mayor David Narkewicz pledged to stand by immigrants by supporting expanded protections in the city. Photo by Chris Goudreau

Narkewicz previously met with the Pioneer Valley Worker’s Center group, the Worker Committee, to brainstorm proposals his administration could grant in terms of offering more protections to immigrants living in the community. The May Day press conference was organized by the Pioneer Valley Workers Center, Jobs with Justice, and other grassroots activist groups.

He said he’s committed to letting people in the immigrant communities know about potential U.S. Immigration and Customs Enforcement (ICE) raids in the city in addition to continuing the city’s stance to not offer local law enforcement support for ICE.

Narkewicz said he reached out to the business community and the Northampton Chamber of Commerce to organizing trainings to employers “so that they know their rights as an employer.”

“If someone comes to their door asking to speak with an employee, it’s important that they know their rights so that they can protect their employee’s rights in this environment that we’re living in now,” he said.

Another proposal that Narkewicz supported was allowing for more language accessibility for meetings and at City Hall. He said the city’s website offers multiple languages such as Spanish, English, and Arabic, but thinks the city needs to do more in terms of face to face interactions with city officials.

He said establishing an advisory city committee to continue to work on this issues would be a priority.

Narkewicz said his administration already supports sanctuary congregations, including the Unitarian Society of Northampton and Florence, which offered sanctuary on April 10 to a Russian-born immigrant Irida Kakhtiranova.

“I fully support this congregation and any other congregation’s right to act upon their moral prerogative to take someone into sanctuary and this city and this mayor will not interfere with that,” Narkewicz said.

He said he’s been disappointed with the lack of progress in passing the Safe Communities Act at the state level, which would limit interactions between local police departments and municipalities with ICE to offer more protections for undocumented immigrants fearing deportation.

“If we can’t pass the Safe Communities Act in 2018 with President Trump, I don’t know when we’re going to do it,” he said.

Eduardo Samaniego, an organizer with the Pioneer Valley Workers Center, student at Hampshire College, and an undocumented immigrant from Mexico, criticized Massachusetts state lawmakers during the May 1 press conference for years of inaction regarding the Safe Communities Act. 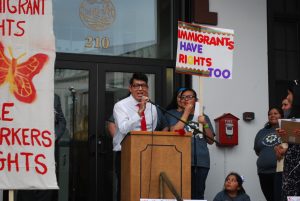 “Here in the state of Massachusetts we have a super-majority of Democrats who haven’t gotten off their damn asses to take action in the year of Trump … Now, I’m going to use this place to call them out. Enough is enough,” Samaniego said.

After the press conference, Samaniego told the Valley Advocate that although he’s glad that Narkewicz is supporting the immigrants in his city, he’s waiting to see what the next two to three months bring before sharing his final thoughts.

“It’s a work in progress for sure,” he said. “I think over the next few months, we’ll see what exactly is accomplished … So far, I’m really happy that the workers have been able to move him to that conversation and he has agreed to protect workers and their wages, making sure that sanctuary churches in the city are protected, and also passing resolutions that call for drivers licenses for undocumented immigrants.”