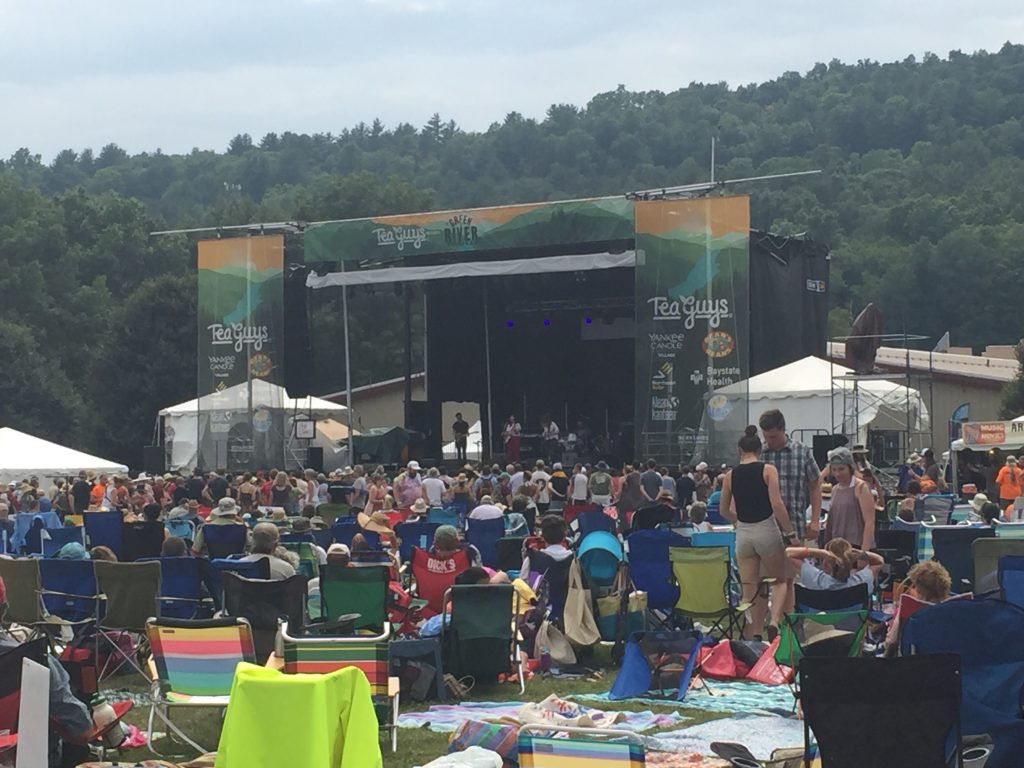 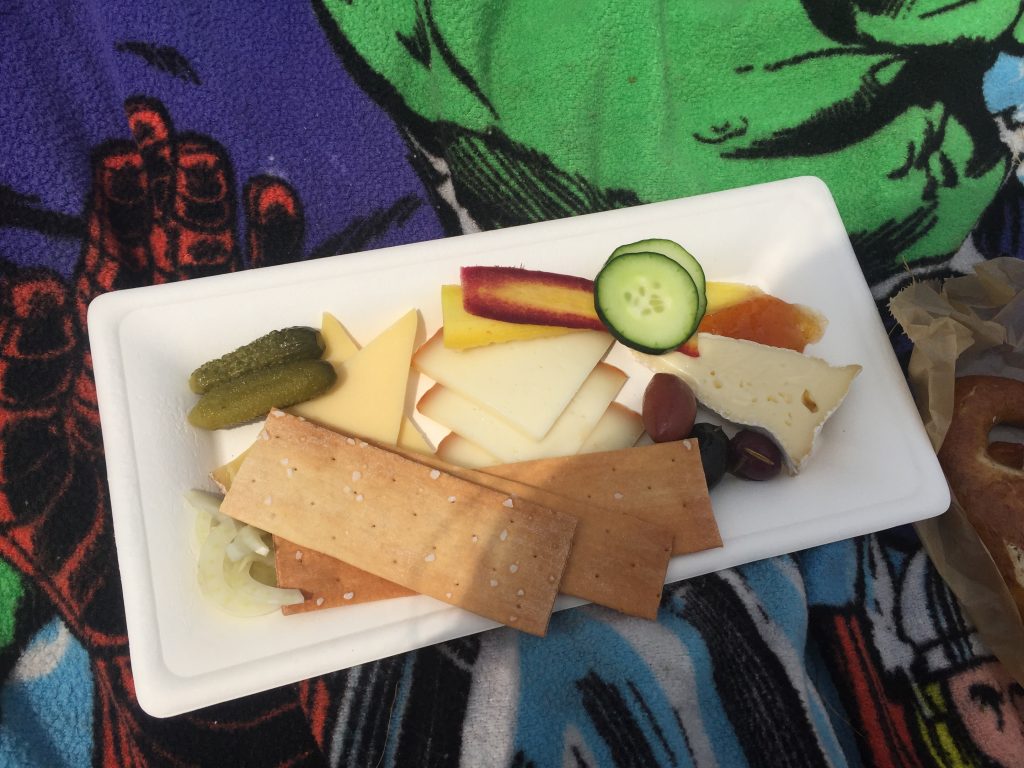 For the past 32 years, the Green River Festival has taken over a weekend in July, spreading out over the fields at Greenfield Community College — three days filled to the brim with music, food, drinks, art, crafts, vendors, hot air balloons, and community. 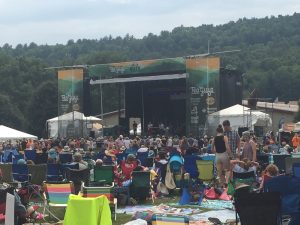 This year, I brought my 7-year-old son on Saturday for his first festival. In the six hours that we were there, it was a nonstop colorful ride.

We parked down the street and were shuttled into the festival on a school bus. The nostalgia of going on a field trip mixed with going to a musical adventure were present in my excitement.

Once there, we searched for the end of the line, and searched and searched. And holy moly! We found it, I swear, a mile away. With a sold out day, which I heard had about 5,000 attendees, it was bound to be a busy day.

The bag check line moved at a walking pace, but damn, it was long. We were in line when Old Flame kicked off the day at the Dean’s Beans stage. Sadly I missed their set, but was able to catch the yoga session going on at the acoustic stage next to the line, just as they were molding into their “corpse pose.”

About an hour-ish later, we walked through the gates. Almost immediately, I bumped into my friend and fellow Advocate music columnist, Chris Goudreau. Then said hello to radio host Trumpy from Hits 943. Gotta love the music scene in the Valley.

After I realized I needed drink tokens to get a beer to quench my thirst, I hopped over to the lovely Ginger Libations booth and ordered a Hopped. Oh my deliciousness.

After that, we were on a mission to find the Art Garden Stage where the Valley’s musical pirate, Snackbeard was playing. We caught him, just as he was packing up. My little guy got a T-shirt though which he was stoked over.

The sky was clear and the sun was hot. Every once in a while you’d catch a breeze and be like “auuuuhhhhh.” But I knew my freckles were popping out on my face from the heat. It was a perfect summer day.

We ventured over to the Makers Market. The vendor booths were impressive. There was a little bit of everything. From tye-dye, to music posters, to fancy popsicles, to venues promoting other shows in the Valley, to novelty and much more.

We picked a spot on the field and spread out our Marvel throw blanket I had rolled up in my tote bag (I pack light), in view of the Dean’s Beans stage. While the band soundchecked, I spotted the Provisions booth and ordered a cheese plate with a soft pretzel for our lunch snack. 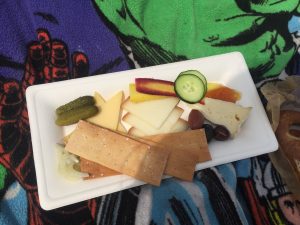 The funky sounds of Big Mean Sound Machine were now filling the air. “Wow, they have the percussion family and the brass family and the string family on stage,” said my 7-year-old with excitement. He then ran around the blanket praising the funk lords.

For each band, there was a nicely handwritten sign next to the stage with the band name on it. I liked that touch. Easy to figure out the lineup or who they are if you don’t catch their names.

The salted caramel ice cream from Maple Valley was a nice touch to cool us down before we rolled up our blanket and moved on. Going to a music fest like this with my son, I knew it wasn’t going to be an all day AND night thing, so I wanted to make the best of it and see and do as much as we could with the time we had. Little bit of this, little bit of that.

We walked back over to the art garden while we heard the sounds of Jack Broadbent coming from the overly packed Parlor Room Stage. All the while, there was a frisbee match going on in the field. So much was going on in this place, all at once. It was great. Their slogan should be: “Easily bored? Go to the Green River Fest; no boredom there!”

We hiked back up the hill where hours before my son rolled down. Then, whoa! The upper field which boasts the Tea Guys’ Main Stage was full of colorful umbrellas, way more than there were when we first got there. It was beautiful.

We poked around in a jewelry/ stone booth while we listened to indie rocker Lucy Dacus on the main stage. I made a mental note to check her out cause I liked what I heard. My son picked out a $5 Bob Marley pendant then we walked through the color umbrella land for another Hopped Ginger Libations and a watermelon ice tea from Tea Guys.

I knew we were getting close to the end of our time here; he was tired and the sun was draining us of our energy. But I wanted him to experience indie/alt rock extraordinaires Deer Tick before we left. For most of their performance, I had him on my shoulders, bouncing around in the area in front of the stage. Towards the end of their performance, we moved over to the side, where he was right up against the metal gate that divided the crowd with the stage. I’ve brought him to many shows before, but nothing this big. Little things like feeling the cold metal up against your skin as you see these performers that your mom listens to in the car all the time, right in front of you, makes the experience that more real.

We grabbed a lemonade for the road, and waited for the shuttle to bring us back to the car, and normalcy. Maybe next year we can stay later to see the hot air balloons. Until next time!